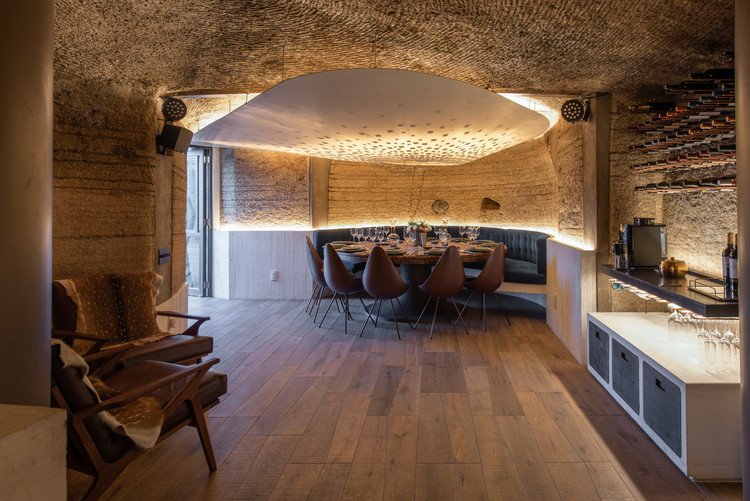 Text description provided by the architects. The Photocatalytic Cave is located 12 meters below a house in the upper part of a hill, to the west of Mexico City, an area where it’s common to find caves created decades ago, to extract sand as a building material. To make use of this natural hollow, the project was carried out by designing and working together with the client, his suppliers and construction team, highlighting Amezcua's design, to achieve a space like no other. Besides its recreational use, this site also intends to promote and generate lifestyle experiences for the real estate clientele of MM.

Several actions were carried out to in order to make this space habitable, enduring, and mutable. The first was to secure the place structurally, placing metal lintels as in coalmines, supported on columns. The second was to carve the roofs, gaining height and physically distributing load forces, in addition to properly directing natural water runoffs.

Finally, the humidity of the site was substantially reduced, with passive techniques such as natural air circulation and also with active equipment such as air injectors, dehumidifiers and two backlit covers made out of Krion, a thermo-formable material that catalyzes when in contact with natural or artificial light, thus acting as air purifiers and light diffusers. The project consists of five galleries – one of them isolated. Upon entering, the first thing you see is one of the backlit covers that resemble a calla lily flower in its shape, which due to its dimensions and interference with the ceiling, questions the guest about the space he enters.

This piece completes the entrance hall and distributes it between the kitchen – equipped with what is necessary to serve formal dinners for up to 12 people – and the living room, whose curved armchair was cast following the shape of the wall. The piece also makes a game of reflections with the closet mirrors, and visually protects the entrance to the toilets, where the focal piece is a washbasin manufactured on-site with marbled concrete, cast with a special formwork that refers to the strata of the cave, by the artist Rodolfo Díaz Cervantes of Taller Tornel.

The gallery that precedes the dining room has, on one side, an intimate place to smoke cigars or have a drink and, on the other, a wine cellar and coffee area. Finally, the last gallery displays the second backlit cover, which is attached to the ceiling. In addition to illuminating the dining room table, this piece emulates the effect of an x-ray, exhibiting a series of blocks placed by the owner –carrying each a written intention – following the recommendation of the artist Emilio García Plascencia. The beauty of this place is in its nature and the reading of time observed in the strata of its walls; in an intervention that softens the space and transforms it into a cave that shows the advances in design, uses and technology that have occurred throughout the thousands of years that human beings have occupied them. 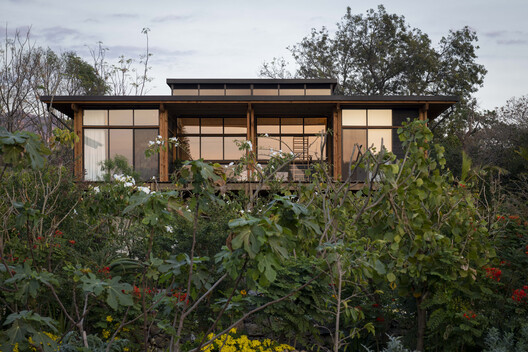