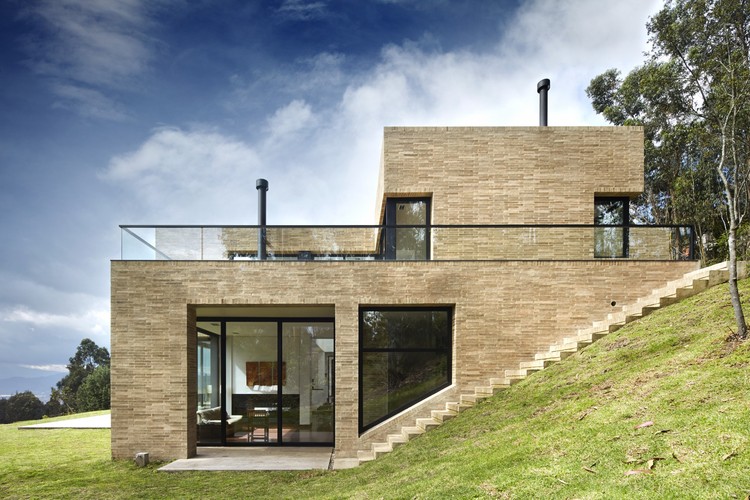 Text description provided by the architects. The project consists of a 600 m2 residence for a family of five who sought the tranquillity of the countryside and a nice garden with a view. The place is located in a rural urbanization in the north-eastern hills of Bogotá and Chía, in Cundinamarca, Colombia. It is a lot with an inclination of approximately 30 degrees and has a size of 3879 m2 surrounded by native forest with a predominant view towards the west over a savannah.

The sunlight coincides with the view in the afternoon, which is very convenient throughout the year at this latitude, altitude and climate (2800 m, temperate-cold). On the other hand, the sun only only starts to shine late in the morning from the east, since the sun is covered by the hill and the existing treetops. The access from the road leads through the lower part of the lot.

The house is implanted adapting to the land in parallel to the contours in two tiered floors each one with a garden: the first hosts the social areas and the service areas arranged in a south-north longitudinal way, serving as containment of the highest eastern part of the terrain and opening to a large outdoor terrace overlooking the savanna. In this way, the roof forms a levelled platform between the eastern part of the terrain and the volume of the first floor.

The second floor is laid out on this platform as a volume arranged in an east-west direction, consisting of the bedrooms and the family room, with an overhang above the social area serving as an eave, with a privileged view for the main bedroom and its private terrace to the west. The three children's bedrooms open to the east to a more private garden at the level of the second floor in relation to the hill. The family living room takes advantage of the south-western corner of the first-floor platform as a terrace and opens onto both views. This is how the house has a garden or terraces at both levels regardless of the sloping terrain, either on the first floor as exterior areas of the living room, study, dining room and kitchen or on the second floor for the bedrooms and the family living room.

The first floor as a long platform is partially covered by the volume of the second floor, which leaves free areas at both ends of the platform to have terraces to the south and canopies and skylights to the north that guarantee sunlight in the morning hours in the service areas. Likewise, the stairs go up through a double-height void in the heart of the house with a large canopy that allows natural light taking advantage of the morning sun as soon as it rises behind the eastern hill and continues until the afternoon, marking the passage of time, not only in the day but in the change of direction throughout the year.

The house was intentionally designed with very few local materials of low-maintenance that generate continuity, such as the large format Bogota brick for all facades, the bright-coloured brushed earth marble terraces, the interior floors and the carpentry in natural wood and blank walls as a neutral environment that the owners can customize. As sustainability strategies, in addition to the hollow brick walls with air chambers, the aluminium window frames have double thermal glass to ensure insulation and low energy consumption. During day time, the naturally well-lit house does not require the use of artificial lighting, which are Led lights, the heating that was installed preventively works with solar panels of hot water on the roof of the garage (which according to the owners is little used because of the suns heat and the insulation of the house). A reservoir of drinking water and tanks and a treatment plant for rainwater were built.

The vehicular access ascends along the perimeter through the northern part of the lot to a guest parking at the level of the first floor. The garage is the extension of the longitudinal volume of the first floor framing the view. The access facade is very closed and private. The pedestrian access crosses a water patio formed by stone walls and finds the door in the centre of the general scheme of the house at an intermediate level between the first and the second floor.

The main circulation defines a north-south axis that ascends the stairs relating the two volumes, always with visual links through windows to the outside. By descending a few steps from the access level one reaches the dining room with a more collected proportion of three meters hight. By descending some steps further one reaches the living room and the study of three and a half meters hight. The living room and the dining room form a large common space without columns but at a slope to differentiate them, and have a large 180-degree window that opens onto the terrace and western garden under the cantilever of the main bedroom. The studio forms the glassed south-western corner. The large central fireplace is shared by the study and the living room, while it also separates and defines the two spaces.

The kitchen at the dining room level opens to a terrace higher than the living room terrace, generating a set of levels that follows a continuity from the interior to the exterior. The kitchen and laundry room have longitudinal skylights that heat the space since the morning. Due to the uneven terrain at the north end, the service room and technical room are located one level below the garage and open to the western facade with its own garden. A general deposit was projected behind the stairs in a continuing line with the study and a workshop or multipurpose space that can serve as a guest bedroom with a facade to the south-west.

When ascending the stairs along with the illuminated void, the circulation ends on the terrace of the family room that gives the impression of reaching another first floor. To one side of the staircase hall, the central void is crossed by a bridge to access the main bedroom, while the children's bedrooms are accessed on the other side. 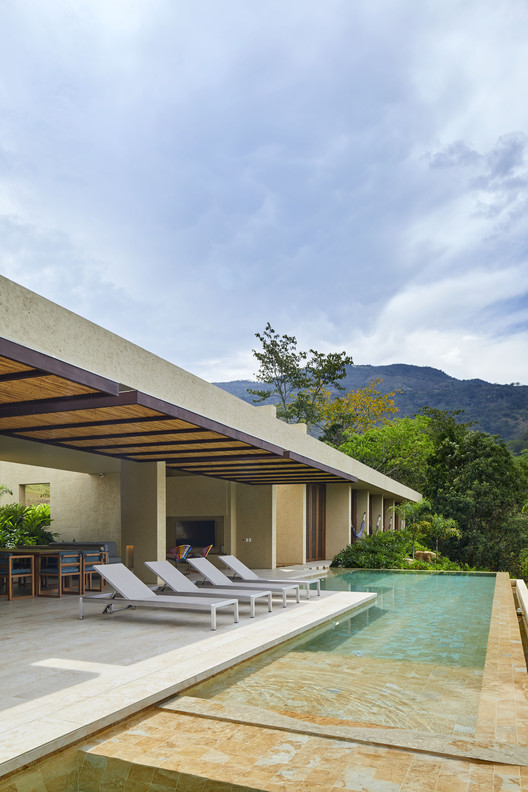