The City of Sydney has chosen Adjaye Associates and contemporary Aboriginal artist Daniel Boyd to design a new public square, plaza building, and public artwork. The project attempts to uncover the lost history of the site, reconcile cultures and define identities.

Located near Circular Quay in Sydney, the new Plaza will be a focal point to retrieve the Eora origins of this part of the coastal city. In fact, the concept based on the meaning of place, heritage, and identity, will generate a space of dialogue, discovery, and celebration, where “lost history” can be uncovered and displayed. In an attempt to reconcile the past with the present in order to project into a more prosperous future, the new urban intervention has a theoretical depth, rooted in the needs of the population in establishing “a dialogue around the complex relationship colonizers have to their indigenous communities”.

Inspired by simple unitary forms and place-making in Aboriginal culture, we imagine the new community building and plaza as a ‘found place’ based around the notion of the shelter, a symbolic respite away from the busy streetscape that is discovered and dissolves through light. To connect this profound center with the sites heritage and origins, we have collaborated with Daniel Boyd, a renowned contemporary artist of Aboriginal descent, on the projects key feature – a 27x34m perforated canopy that shelters and unites the community building and the plaza under a poetic layer of light and darkness. -- Adjaye Associates

With a hybrid form that merges the Aboriginal origins with the legacy of early settlers and the industrial materiality and language of the nearby harbor, the program that includes an open plan café, gallery space and garden terrace, is scattered in a flexible, free-flow space “with activated connections to the plaza and adjacent developments, where encounters with art and community are made easy”. Daniel Boyd, inspired by Aboriginal dot painting, will curate “a cosmic journey of light that filters and refracts through multiple, randomly scattered, circular, mirror-lined canopy openings”. In fact, these patterns continue onto the paving through a series of steel circles and cylindrical glass skylights, in order to extend the play of light down into the bicycle facility under the plaza.

We have envisioned a highly interactive environment that connects holistically to its neighboring buildings and the public realm. Our proposal, in addition to the new community building, includes the George Street public plaza, Circular Quay Tower pedestrian bridge as well as the integration of the proposed cycle parking facility. Incorporating these public interventions with our design proposal ensures a building which is tied to its location and community. We believe the new community building and George Street public plaza can become a newly cherished destination in Sydney’s CBD, a generative place for people to connect, recharge, reflect and take a pause from the rhythm of a fast transforming city. -- Adjaye Associates

Established in June 2000 by Founder and Principal, Sir David Adjaye OBE, Adjaye Associates is known for its sensitive approaches with heritage, identity, and conflicts. Their largest commission to date, the Smithsonian National Museum of African American History and Culture, opened in 2016 in Washington D.C portrays the firm’s commitment to creating an architecture that reconciles cultures and embraces differences. 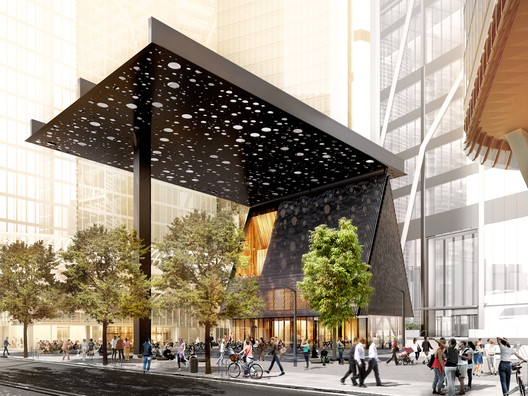