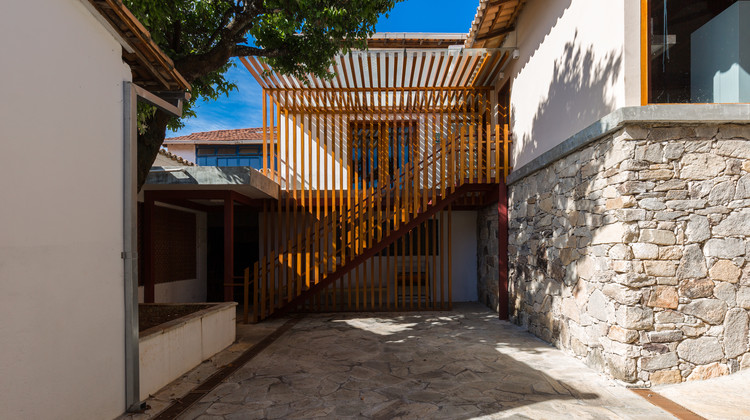 Text description provided by the architects. The proposed intervention for the new Diocesan Archive had as basic assumptions: restructuring the outside space of the property in order to host the new needed installations for the operation of a new and structured research center for the community and the contextualization of the property in the street urban ambience. The proposal seeks to highlight its contemporaneity and, at the same time, respect the urban morphology of the site it occupies.

For a better understanding, we comprehend it is necessary to clarify the work area. It extends itself through the whole frontage external area and the left side of the property up to the guesthouse boundaries, in the rear of the land; it encompasses the building of the current archive, as well as the covered parking lot; and, finally, it extends itself by the wall through the whole extension of the lot.

The former situation of the property, concerning not only the work area but the entire lot, was characterized by a great fragmentation concerning the use program, with several independent buildings stripped of the context of its own lot. The property could not be considered as a unit and it was also out of the context of the city. This fragmentation caused, besides esthetical damages, prejudices to the Diocese operation: conflicts over vehicles and pedestrian flows, the non-establishment of a Diocese function hierarchy and the lack of wide and continuous spaces.

Regarding the colonial city urban morphology, besides the mentioned fragmentation, that caused a distance among the buildings, uncommon in the surrounding area, the frontal buildings are distant from the frontage of the land. This situation is a result of the sequence construction of independent volumes in a historical moment that the current architectonic “styles” proposed a distance among the buildings regarding the lot lines, disregarding its contextualization in the urban context, which has a very different configuration. This situation caused an interruption on the normal set reading of the colonial city.

Considering this issue and the assumption of creating a space for the New Archive, the intervention adopted the following solutions: suppression of all elements constructed inside the established work area; creation of a new volume distant from the boundary wall and near the main house regarding the floor plan, but with a roof that extends itself up to the neighbor wall; and maintenance of the green areas located in the interstices among the buildings.

With this proposal, an open space receives the user and split the external public flow from the internal public flow. When the users direct themselves to the New Archive they can enjoy some external spaces without necessarily enter the central building. The project uses this different accesses configuration to create an ambience for the external public that could feel a more visual integration among the external spaces, more pleasant to their use. For that, it was necessary the use of glass as enclosure material, allowing a view up to the “green” wall, guaranteeing, at the same time, a controlled natural lighting.

The access through the vehicle gate it is now restricted to the users destined to the guesthouse, to the service area and to be used as a second access to the main building. Finally, in order to maintain this visual continuity without obstacles, it was chosen to place the public sanitary close to the existing sanitaries, located next to the entrance of the main house.

Regarding the second assumption, the contextualization of the property in the street urban ambience, the following actions were required: demolition of the existing wall to build a single element with the same superior closure alignment, in order to “tie” the set and grant a unit; creation of the necessary openings in order to mischaracterize the wall aspect, that is very harmful to the street routine, and also to allow that this element could be treated more like a façade of the building, which can be noticed as the whole property; relieve its dimension out of proportion in relation to the street; and to site the new building in the boundary of the lot line, in the same way that the colonial city land use proposed.

We believe that these decisions will rescue the idea of the urban set of the street, at the same time that it creates a required wall with a façade aspect. For that, it was fundamental the option to bind the wall openings to the internal use, whether it is immediate (collection rooms and reception) or the ones that are more far (main house functions). This binds, on the other hand, bring the user closer to the street. 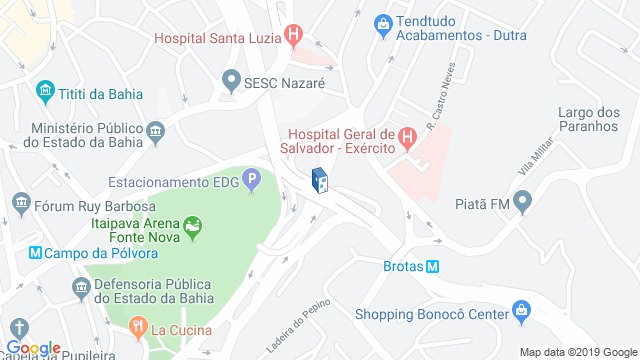 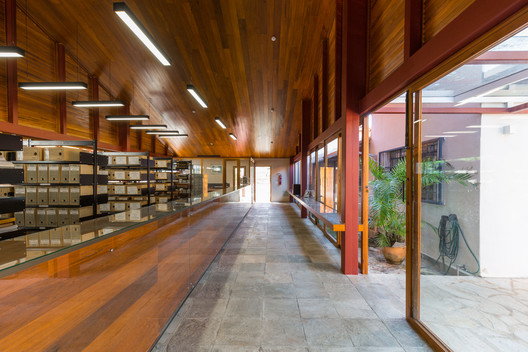