Save
House in the Trees / Luciano Kruk 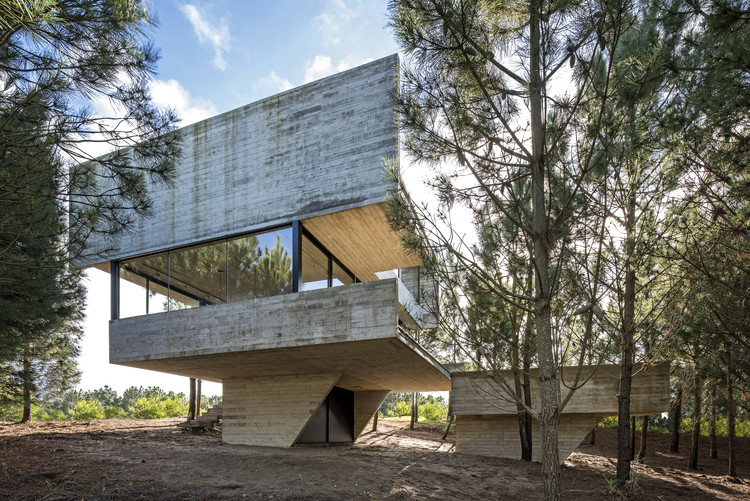 Text description provided by the architects. House in the Trees was designed to be built in Barrio Marítimo II, a neighborhood in Costa Esmeralda, located thirteen kilometers north of the city of Pinamar and four hours away from Buenos Aires City. Parallel to the sea, this neighborhood is separated from the coastline by a screen of leafy pines, thus producing a setback that complies with provincial regulations. The lot’s highest level is at the front, and slopes downward as it gets farther from the street, just as sand dunes do as they interfuse with the sea.

The clients commissioned a leisure home that could also be rented out eventually. The house had to accommodate a typical program: one master room and two secondary bedrooms, a social uses area, and an outdoor swimming pool. They requested that the house, protected by the woods, had minimal impact on its environment. Supported by a minimum tread structural volume – which lodges the entrance and the service and engine rooms – the house was situated on the highest level of the lot. We decided to set the house back beyond the minimum required by regulations. Surrounded by a pinewood, the house merged into the landscape’s natural atmosphere gaining privacy and the possibility of increasing its glazed surfaces.

Regarding the request to minimize the maintenance needs, we proposed the house to be made entirely of exposed concrete and glass. Dark bronze anodized aluminum was chosen for the exterior framings for them to be visually invisible. In this way, the contrast between the spans and the concrete shell is emphasized. Common areas were disposed on the first floor—two meters above the natural terrain’s level—while the bedrooms floor plan was organized above, at a higher level. Emerging from the natural ground, a wall goes all the way up to the rooftop, organizing both floor plans. The humid locals were disposed towards the street and the nobler ones, sheltered facing the woods.

While the lower floor has low partitions on both sides and on the front, it opens on the rear through total height framings towards a watching terrace that, embraced by the pines’ canopies, serves as an expansion for the living and dining areas. Except for a few metallic columns set around the shell’s perimeter, the greatest part of the structure is located at the center of the floorplan so it is almost invisible from the outside. The side partitions go all the way up to the rooftop, providing the intimacy of the bedrooms from neighboring houses.

Regarding natural lighting, one of the purposes was to prioritize the staircase area with a skylight on the rooftop. Moreover, slabs cantilevering over both levels as eaves protect the front of the house from the vertical north sunrays. Designed as an independent structure elevated artifact, the swimming pool is detached from the natural terrain and connects with the house through the social area’s expansion. In order to preserve the visual continuity between the house and the vegetation, the pool was disposed perpendicularly to the constructed volume.

House in the Trees sought to merge with the woods to enjoy its scents, textures, and visuals, proper of its leafy natural environment, so powerful but at the same time balsamic for the senses. The higher volume seems like a compact, massive floating box over the lighter and transparent lower floor. While the stony materiality’s austerity and honesty aimed at guaranteeing the project’s perdurability, the architectural synthesis of its floorplans represents nothing but the reflection of such a lifestyle.