Dutch design practice Mecanoo has revealed their design for the Konka mixed-use project in Shenzhen, China. As the team states, Shenzhen is searching for new models for urban and architectural innovation to replace the traditional model of large-scale indoor shopping malls and focus on flexible development. The new Kang Qiao Jia Cheng development was made to provide an urban regeneration paradigm and a new icon for the Shenzhen skyline. 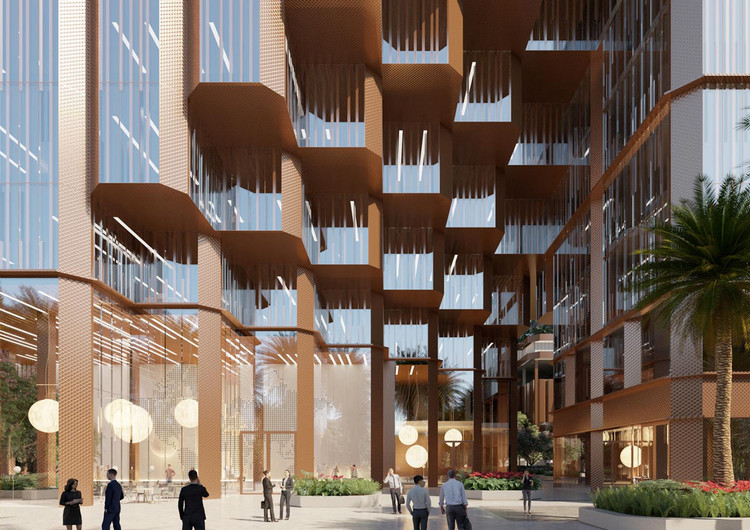 The Konka mixed-use project was inspired by the small-scale urban tissue of historical Chinese towns. The design was made with a permeable urban fabric to allow pedestrian connections within the site and to neighboring areas. Located on a sloping plot bordering the highway, the scheme consists of two facing towers, connected by a network of plazas and green terraces. Two stepped platforms solve the height difference between the northwest and the southeast corner. Easily visible from the highway and soaring 280 m into the sky, the tallest tower occupies the south-western corner of the site. The building hosts the Konka Group Headquarters, an electronics manufacturing company with an international reach.

On the opposite corner, the business apartment tower provides panoramic views of Shenzhen Bay and the mountains towards north. Lower heights along Enping Street achieve a smooth transition to the smaller scale of the surrounding buildings. By extending the pedestrian circulation network towards north, the complex will connect to the OCT (Overseas Chinese Town), a new upscale neighborhood, home to many creative industries. The spatial strategy for the urban design relies on a system that should work at different scales and maintain the building’s identity when seen from afar or up close. A 9×9 m grid system facilitates a transition between the office tower and the smaller scale of the apartments, creating a diverse urban space.

Porous at street level, the building has a plinth that accommodates workshops, bookstores, retail and restaurants. Gradual setbacks shelter the entrance zones and open the building to a public passage that leads to the inner plazas. While the low retail buildings are mostly covered with perforated copper panels, the towers are transparent, reflecting Konka Group’s culture of openness. On top of high-performance glass, a copper mesh accen­tuates the office tower’s beveled modules. Using the same inclination, balconies with slanted sides surround all the levels of the business and apartment tower. Throughout the development, the pattern and position of the panels reduce solar radiation and optimize daylight exposure. 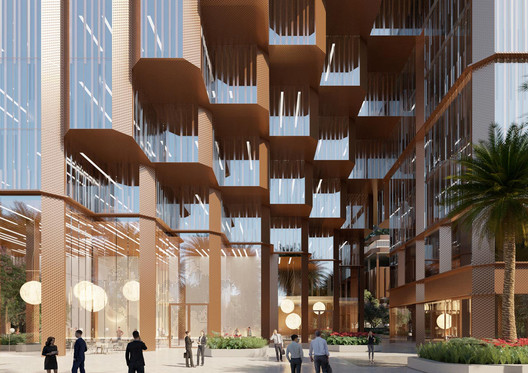