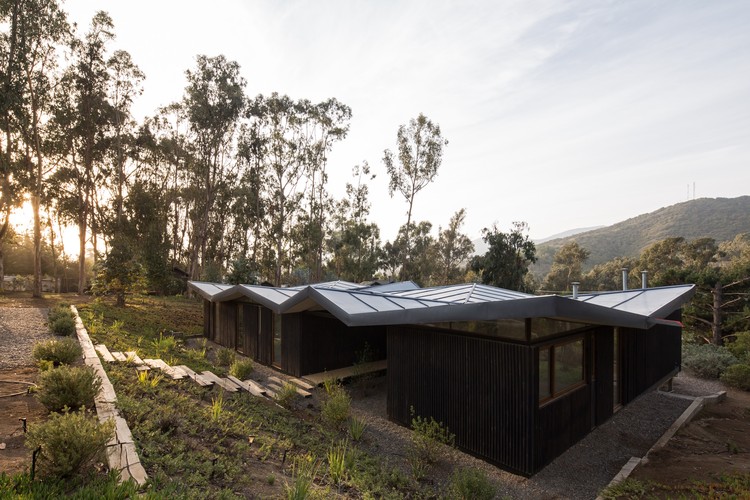 Text description provided by the architects. Origami house is a vacation home located in the coastal region of Valparaiso, Chile. Away from the sea, it seeks for tranquillity and views of the nearby hills through the peaceful native surroundings of the inner ravine in which the house is built. To deal with an initially low-cost requirement, the house is thought out from its beginnings with prefabricated and modular materials, engaging in a fast execution which lowers the construction cost and enables the owners to inhabit the house in as little time as possible.

The house settles in the middle point of the hill`s slope, and its axis is rotated gaining as much north -and sun- as the terrain allows. The terrace is delimited by two walls that strengthen the general layout of the house, by narrowing the exterior view into the landscape and avoiding its neighbours. Looking for an enriched spatial experience, the roof unfolds over the structure like an Origami piece, where its triangulations allow light in the interior delivering a unique character to the construction.

In its 180 square meters, the interior layout contains four dormitories, including the main one, a living area which integrates the kitchen and its dining room, plus a service area that allows the house to function properly not only as a vacation one, but also on a daily basis. Large spaces were built using steel structures over the SIP panel construction system. The latter one not only supports the structure, but at the same time delivers an excellent thermic isolation according to the weather conditions normally encountered in this area. Finally, the walls and ceiling are lined with native treated pinewood, giving out a warm environment by bringing the surroundings into the house, concluding the project as a simple, low-cost and efficient construction.