Text description provided by the architects. The environment of "Los Bajos" is located in an intermediate space, between the boulevard and the city, the sea and the countryside, the square and the city, but it was turning its back on everything and everyone, it was a "no place". Its fenced perimeter formed an edge, an island outside its surroundings that prevented any type of urban and socio-cultural relationship. Returning the city a landscape and the citizen a place of relation were the inseparable objectives of this proposal.

We think of public space as the place where cultures are founded, a space where to favor and ensure equality and social relations, a place to strengthen ties with neighbors and with one's own city. We understand "Los Bajos" as a completely open, accessible and flexible place, where all kinds of activities are mixed, where there is space for community, but also individuality; covering a wide range of the population, from children to the elderly. Because only by responding to diversity we can ensure the full development of society.

It departs from the current urban plot rearranging it through a system of visualization, routes and accesses that allow a continuous gradient of the park towards the city and vice versa. From any perimeter street, the interior is accessed through a small square with a jacaranda tree that marks the access to the interior through paths that disintegrate and rejoin with other squares that house the park areas for sports and leisure. To the north, the park extends to the boulevard, incorporating and revaluing the municipal sports hall and the bullring.

The Aduana Avenue is pedestrianized and its base is removed by raising the street level to the level of the commercial shops (using landfill from the park's clearing). This action is complemented by placing the buildings of the park in front of them, reinforcing the commercial and flexible nature of this space. The new facilities consist of two porches, two viewpoint terraces overlooking the landscape, one cafeteria and a library.

Under the cafeteria there is a program of sports locker rooms with direct access to the semi-excavated sports fields, minimizing the visual impact and the park's surface area while adding great spatial value. All routes are adapted to allow equal accessibility, architectural barriers are removed and the topography is resolved with small slopes. The equipment is also fully adapted. 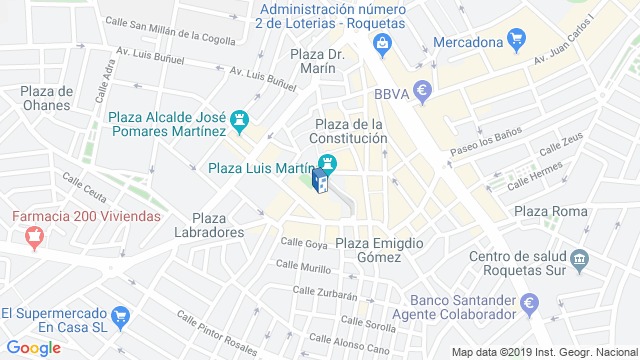 Location to be used only as a reference. It could indicate city/country but not exact address.
Share
Or
Copy
About this office
Emac Arquitectura
Office
•••