✕
Save
Digging Deep: Is Going Underground the Solution for the Future?
Share
Or
Copy

Helen Taylor of Woods Bagot and Rachel Cooper of Arup Associates team up to explore how deep basements may be the future of the city as density and population growth result in the need to dig deep as well as build high. Using their current joint project as a case study, they share their experience of building the deepest habitable basement in London and among the deepest in the world. Set to open in 2020, The Londoner will offer 350 rooms, multiple restaurants and lounges, a rooftop bar and underground spa with swimming pool, Odeon cinema, and a 1,000-capacity ballroom. At over 35 meters deep and containing a large percentage of the FOH floor area, the basement presented several challenges that required innovative architectural and engineering solutions from both teams, which are presented in the following interviews with Helen and Rachel.

In the video interview above, Helen Taylor, Senior Associate and European Technical Innovation Leader at Woods Bagot, talks about the architectural challenges of designing and building this kind of underground project. In the written interview that follows, Rachel Cooper, Lead Structural Engineer of The Londoner and Associate at Arup Associates, presents us the structural and engineering challenges associated with building the deepest habitable basement right in the center of London.

SS: What was Arup's role and your specific role in The Londoner project?

RC: Arup provided lots of services: we had 16 different Arup disciplines working on it, so mechanical, electrical, and public health which is relatively normal, but also lots of specialists like fire, acoustics, vertical transportation, advising on accessibility, and facade engineering. There was a massive Arup team working on the project. We've been working on it for 7 years, which adds up to around 100 different people over that time. We got involved in the project in 2012, right at the beginning, and had worked together with Woods Bagot right from the start.

Because there where so many things to fit into the building, that meant the challenge for my team from the engineering perspective was to create this huge basement to fit all these things in. Because we couldn't go any higher, we couldn't go any wider, we've already taken the whole of the city block, there was only one way to go - and that was down, which is a new challenge. We still can't find an example of a deeper habitable basement. We can find basements for car-parking, scientific research, or subway stations, but to have a building basement for a luxury high-end hotel that deep - it's a massive engineering challenge to create such a huge hole in the middle of London. So, 50 meters by 50 meters on plan, and then sort of 31'-ish to the bottom - but then, there's bits of it that go even deeper to about 35 meters, because at the bottom of the building you've got the lift pits, the drainage tanks, and all that has to be pumped out. From an engineering perspective it's just a massive challenge overall.

SS: What would you say was the most challenging aspect from an engineering perspective?

RC: From the bigger perspective, trying to coordinate everything that needed to be there: you need a lot of equipment just to get fresh air down there for everybody. There is a lot of stuff - if you just consider the primary services of the building, it already looks like a building, but there's no building yet. So you've got to fit all that in. That's a challenge, as are the architectural aspirations, which are really high because it's gotta be amazing - you don't want low ceilings and things in there, because it's gotta feel spacious. And then from the structural perspective, all the slabs that are in the basement are holding the basement walls out. So we can't just put a massive rise, or put an atrium, so bringing all of these things together is a big challenge, because everyone has high aspirations. It was a challenge, but an enjoyable challenge, like a puzzle that needed to be solved. So me, Helen, and the lead mechanical engineer would lock ourselves in our offices, we would open the 3D model, and say, "OK, today we are going to walk around this floor and we are going to look for problems in the 3D model." We couldn't mend all the problems there, but we would agree on a course of action, log it, and move on to the next thing. We would spend days, weeks, months just getting there, until it all came together. And so far, it's coming together well.

SS: What technologies did you use for the entire process?

RC: Everything was done in 3D. We didn't have a mandate on the project to be BIM level 2, and no one was telling us that we had to do it in a certain way, but I don't think we could have done it any other way. So we have a combined model, we share models every week, and we combine them into one, solving problems. We make use of the Jira platform to track issues, because there were thousands. There's a little plug-in you can use for Revit: you just click on it, type what the problem is, who will deal with it, and you can attach a sketch or photo. I don't know if we could have coordinated the building as well without those tools. I mean the heart of it all is having good relationships, which i hope came across in the presentation - we have a really collaborative relationship. So I think that was the heart of it, but I think these pieces of technology really helped. They can really help managing something when it's so big and so complex.

SS: There's very little documentation on city utilities and underground shafts on a site, how do you approach this issue?

RC: Normally we run a search, we ask for records of everybody, the gas board, electric company, etc. But the records sometimes are inaccurate, or there is such a far away scale that you don't know. So then we come and scan the site as well, but the scan doesn't always pick everything up. So then, we have to actually dig in pits, lift lids, and look down. There's an element of risk until you fully get to the bottom of what's going on.

On the site, where there was an existing previous building that already had a single basement, we kind of knew what was going on there. The complexity came when we decided to stretch our excavation area to the street. The amount of utilities we had to divert, just to get that few extra meters on every side - that was a year and a half long process. You can build a building in a year and a half! So to have to do that before you even start digging - it was shocking.

Once we diverted all city utilities, McGee, who where on contract, did an amazing job. They had a truck leaving the site every 4 minutes in the center of London. They made use of loads of different bits of technology to help make it a really smooth process. It took them 9 months to dig that, while it took us 18 months to divert existing structures.

SS: So, is digging deep the future of architecture?

RC: I don't really know if that's the future, but what I do know is that at the moment, that space below ground is not being utilized properly in cities, or in fact, anywhere. And when it is used, all the basements are shallow and used for car parking. I think that what our project shows is that there is actually way more potential. You can do a lot more, and initially might think, "Um a basement, what would you put down there?" But actually there's loads of these leisure uses, that just fit really well down there. A cinema is perfect - you don't want a window in a cinema, you wan't a black hole, and it's much better for the acoustics. So there's a lot of things that can be put in these spaces whereas you might initially think "No, I don't think there's any." So I think there's definitely more potential than perhaps people have realized in the past, but I suppose for us there was a specific set of constraints that led to us going down - we were forced to because of the aspirations for the project and the site regulations, but actually I do think it has proven that there is potential to put more stuff below the ground.

Maybe as we go into the future, since we talk a lot about resilience and designing things for future climate and extreme weather events, I actually that space is probably better suited to those extreme weather events. So I think there's lot of potential there, and I think it's something we should be exploring it more.

SS: What's your take on how should architects evolve? What are the skills or what should we be learning to be up to the challenges for tomorrow's architecture?

RC: I think what we are finding is that things are changing really fast at the moment. There's lot of stuff going on, and it feels like a very turbulent time for all of us professionals, because the world is changing really quickly. The velocity with which we are adapting to new technologies is shocking. So I think there are huge problems that we need to solve as a group - not just architects, but all of us. We are going to be building a lot more in the next 30 years, but climate change is real, and we need to be thinking about how can we do these things better and not have that impact. We've got to work together to solve these problems because they are massive, and I don't think an architect could solve them on their own, and I don't think an engineer could solve them on their own, and I think it's going to have to be a team effort. So I would say that the skill you have to have is an awareness of the wider world and what context it is we are working in, and to try to understand those bigger problems. That can be quite scary, but still try to have an idea of whats going on around you. Work with people and make the most of their skills, and try and solve things together, because nobody can do it in their own, it's too big.

The Londoner Hotel was one of the many projects presented and discussed during the Architecture of the Future Conference, held in Kyiv, Ukraine, October 2019. 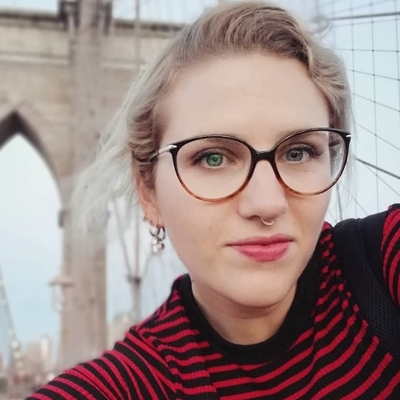