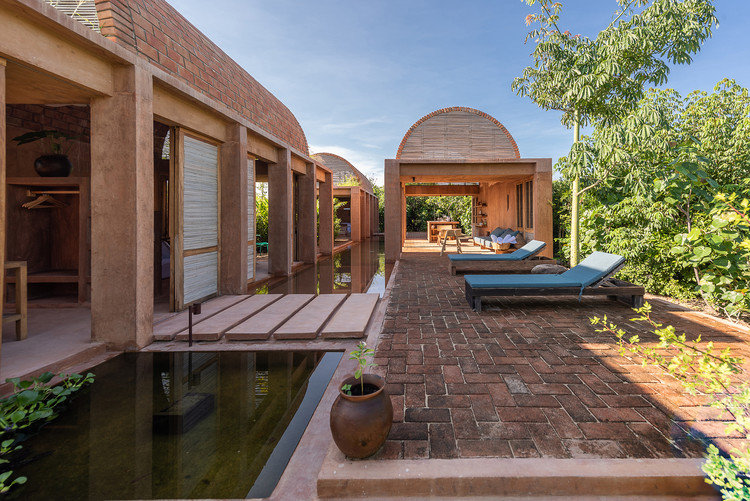 Text description provided by the architects. The first thing one notices approaching Casa Volta are three brick vaults floating in the middle of the dense Oaxacan coastal vegetation. Maybe it is just a mirage provoked by the heat and humidity of this place. Afterwards, following a small path deep into the vegetation, the vaults disappear. Then a clearing opens, and surprisingly a small bench appears next to a long pond surrounded on both sides by symmetrical columns and its reflections on the water. It seems that one has arrived to an abandoned classical temple.

The house has a rigorous, Kahnian order. It is a rectangular plan subdivided in six alternating rectangular areas: three open courtyards, and three spaces covered by the vaults. The rooms and its bathrooms are located in two of them which open and close with timber and reed doors; the kitchen and living and dining area are located in the third one, which is always open. And at the centre of everything, water, as a constant presence, as a reminder of the closeness of the sea, that even if it can’t be seen from here, is just a mere 300 feet away. A practical and economical circumstance determined the materiality of this house. Foundation Casa Wabi is located nearby, a place where clay is fired, and where at the time of the construction there were leftover bricks available for recycling. So, the idea of using brick vaults built on top of a concrete structure pigmented with clay colour emerged. A simple construction method that would allow to fulfil the tight construction schedule. On the other hand, the vaults, along with the reed lattices on their sides, make the wind flow profusely in the closed spaces, while water refreshes the exteriors. All of this produces an atmosphere of warmth and freshness at the same time.

Casa Volta is the proof that an adequate relationship between architecture and nature can be achieved with few well-thought elements, that constructive order is not in contradiction with the apparent chaos that surrounds it, on the contrary, they can merge in a harmonious way. It is also a reminder that simplicity is always elegant. More than a house, this building is a small haven of civilization in the middle of the jungle, the cabin where Heidegger would have taken shelter if he had a more tropical vocation. 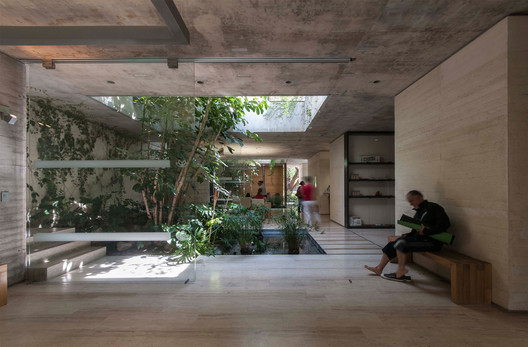