Simbiosi, an architectural installation investigating the relationship between humans and nature was just unveiled in the Arte Sella sculpture park in Italy’s Trentino Valley. Conceived by Edoardo Tresoldi, the site-specific artwork mixes the transparency of a wired mesh structure with the materiality of local stones.

The famous open-air museum and park, has just reopened during springtime to the public, after being badly damaged by a storm during winter, and after finalizing the reconstruction works on the artwork. Arte Sella includes pieces by internationally acclaimed artists and architects such as Eduardo Souto de Moura, Kengo Kuma, Michele De Lucchi, and Ettore Sottsass.

Through Simbiosi, the artist, for the first time, “hybridizes the transparency of the Absent Matter, expressed through the wire mesh, with the materiality of local stones”. The architectural installation generates a space of rest and meditation, an open space to the skies, “a ruin suspended between architecture, nature and temporal dimension”. In deep connection with Arte Sella Park, Simbiosi is located on a hill that did not exist prior to the storm of 2018.

Reaching 5m of height, the structure challenges gravity. In fact, the artwork states that it is a personification of “a body in suspension that levitates between consciousness and unconsciousness, between the material and immaterial world […] a living organism, permeable yet intimate: an emotional communication channel with nature.”

Simbiosi experiments with the concept of ruins. It became a reconstructed entity, through unusual methods. In fact, the artist’s design is inserted into the structural elements of the decay. Between earthly and spiritual dimensions, the installation merges with nature and becomes part of the landscape.

Simbiosi is an interpretation of the surrounding landscape through the intentional connections between architectural and natural elements, whose continuous exchange defines the aesthetics, meanings, and logics of sculpture. The architectural archetypes, through which Tresoldi narrates the landscape’s elements, become here the channel through which they can be interpreted. -- Edoardo Tresoldi 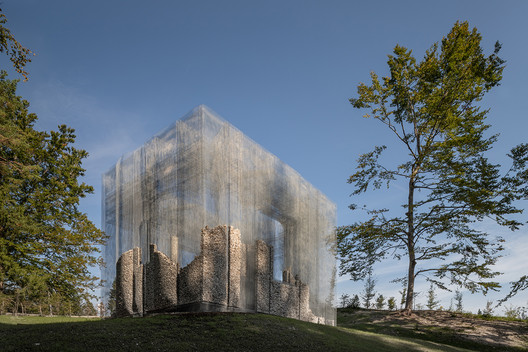