KCAP + Felixx have won the international competition for the revitalization of the coastline of Dapeng, severely damaged by the Mangkhut typhoon in September 2018. The winning proposal developed a logic of “Triple dike strategy”, a barrage system to ensure future resilience. 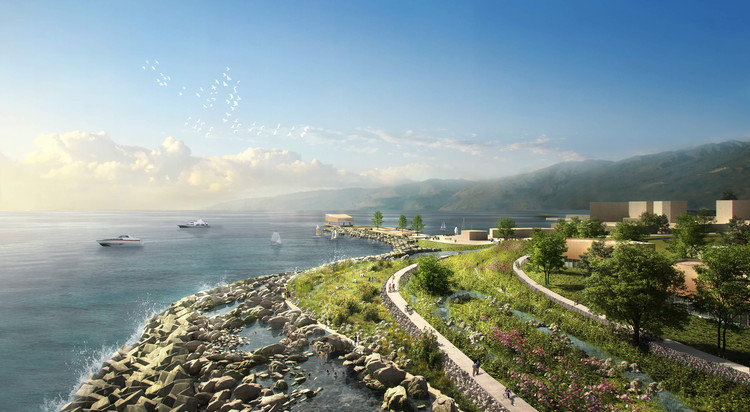 Situated in a green peninsula in the bay between Hong Kong and Shenzhen, the infrastructure of the coastline suffered tremendously after the natural disaster. An international competition was launched promptly to “develop a plan to restore the coastline and raise protection standards against the more frequent occurrence of extreme weather events”. Expected to be completed in 2021, the concept of KCAP + Felixx is divided into 6 strategic projects, along the 32 kilometers of coastline, in order to create a resilient framework for social and economic growth.

The imagined project by KCAP + Felixx puts in place the “Triple dike strategy”, a multifaceted fortified structure enabling “an integrated approach towards the climate adaptive reorganization of the shore”. The system “moves away from a generic protection wall along the coast, towards the creation of three development zones”.

In fact, every area has a different purpose and responds to specific future needs. The first one works on decreasing waves, reducing erosion, and ameliorating the process of sedimentation. On another hand, the second dike holds a program with a multifunctional wall that includes a park, an elevated waterfront with urban promenades, and a public building. The embankment “stops the storm surge and the water pushed up by the waves”. The final hybrid structure absorbs and manages rainwater.

Moreover, the implemented system protects the villages along the coastline, “enhances the existing qualities while unlocking potentials for growth”. Actually their character and identity are protected and strengthened. The designers worked thoroughly on the connectivity from the water, in order to reduce the impact of the infrastructure on the island. 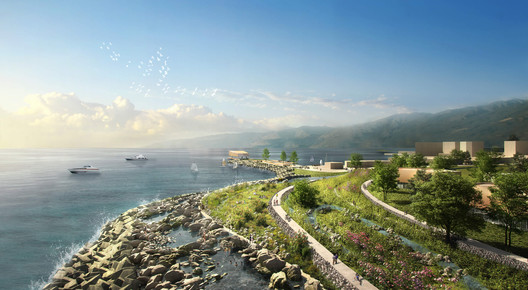