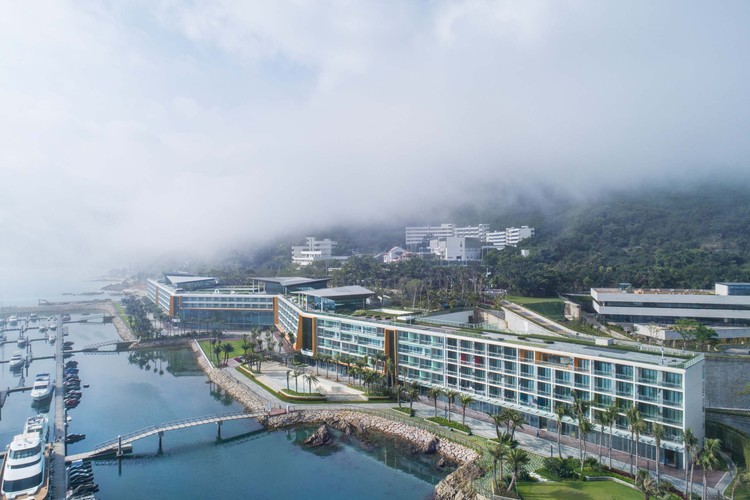 Text description provided by the architects. Longcheer Yacht Club is located in the Judiaosha of Dapeng Peninsula, Shenzhen, who is 50 kilometers away from the downtown area. It is extremely popular as a sailing venue for it has been held many international competitions.

This project is to rebuild the yacht club and the dock on the original site. The total floor area is 55,000㎡, including a private club, a 300-room hotel, and an outdoor sports school. The site owns a 470m long coastline, but the building will be easily forming a long "wall" which may block the city’s view to the see when it is horizontally arranged on this narrow site. Therefore, this design aims to share this beautiful seascape between the yacht and the city by keeping both of their view to it.

The scheme makes efforts to suit with the site’s north-south height difference and set most of the volume under the level of unban streets, except 4 small “pavilions” with 40m distance between each other, through which people can still easily see the sea. These pavilions present a light image by polygonal plate roofs cantilevered from all sides, they are injecting protruding points upon the horizontal long building, bringing in an undulating skyline. Besides, they provide resting stations to sea viewers.

The main building below the urban road level is 5 stories with a length of 400 meters, which is bent into 4 segments in accordance with the coastline. Each two balconies belonging to hotel rooms form a rectangular “cell” on the façade. The depth of cell frames is changing, which makes subtle differences of sunlight projection and the reflected image of the balcony glass between adjacent cells. The frame of each cell is made up with light-silver aluminum panels. Inside one cell, the two balconies are separated by a double-layer frosted glass which contains lights inside to achieve a soft and vivid lighting effect at night.

There is a folding "floating belt" between the hotel room part and the public service functions such as clubs, restaurants, bars, etc., which clearly distinguishes the public space from the private area, and also strengthens the contrast between the cell facade and the large glass curtain wall. The gene of “belt” actually comes from the bending of the building shape on masterplan along with the site boundary. We continue this kind of bending from the fifth façade to the main façade as another of our response to the shape of mountain and sea wave from the environment.

When we set out to the sea from the dock and look back at the yacht club, the shape of the building shows a humble posture. The overall color of the façade is plain and elegant with some partial interesting elements. Seeing from the hill behind it, the green roof and blue pavilion seem to be hidden into the mountains and the sea，showing the respect for nature and people. 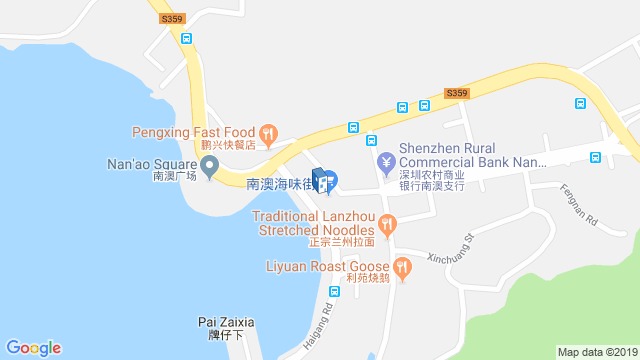 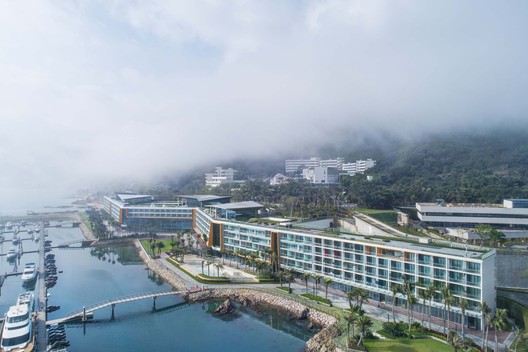