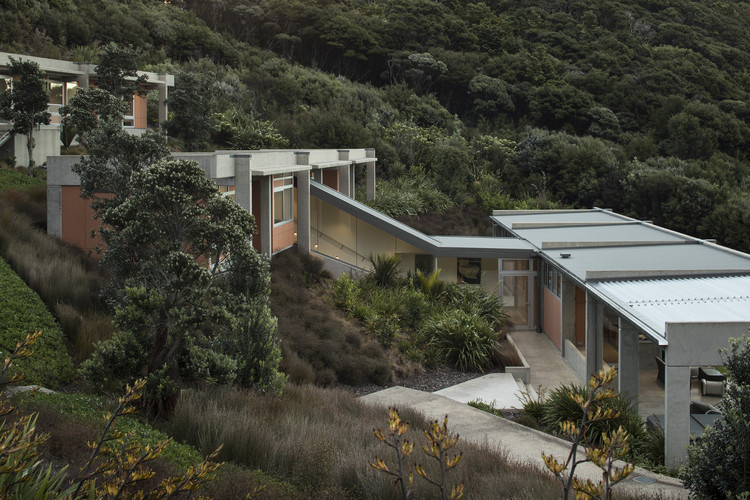 Text description provided by the architects. The site is a relatively constrained valley which runs north towards the sea, with prominent headlands to the east and west. It is planted with regenerating natives, with an open lawn area between the house and the sea.

Although the overall site is 5.3ha, the Buildable Area is relatively small, constrained by the road to the south, the sloping land to east and west, and the 30m Foreshore Setback. An archaeological site has a 10m setback from the western side boundary, and the Geotechnical Engineers identified a ‘building Limit Line” which restricted building to the west of the valley floor. A 5m rolling maximum height provided another tight restriction.

The house is another iteration of our “encampment” houses, whereby three separate wings sit almost parallel to each other, following the slope of the land and gently rotating in plan as the drop down the hill. Levels were set up to ensure views from each wing over the one in front. This ensures they fit well in the landscape and minimises the impact of a single large building when viewed from the sea. Planting between the wings provides additional concealment of the true size of the building.

The clients wanted concrete. Rather than a concrete walled house, we developed a language using finely detailed exposed frames of pre-cast concrete, with lightweight framing clad in through-colour Eterpan as infill. This creates a lovely rhythm, articulates the masses, and breaks the expanse of roof when viewed from above. The glazed walls are patterned with infill panels of plywood.

Large overhangs to the majority of the windows provide shading for efficient solar control, and also ensure the windows are recessed to reduce visibility from the sea by minimising the reflection from glazing. 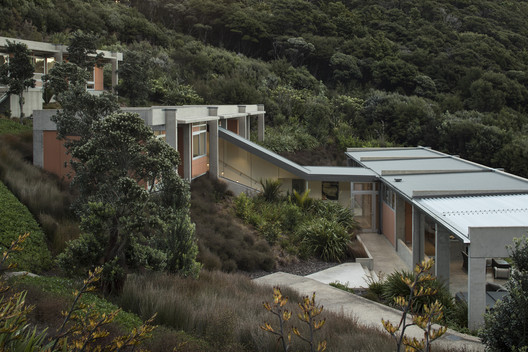