Save
Up Yard House / Architects H2L 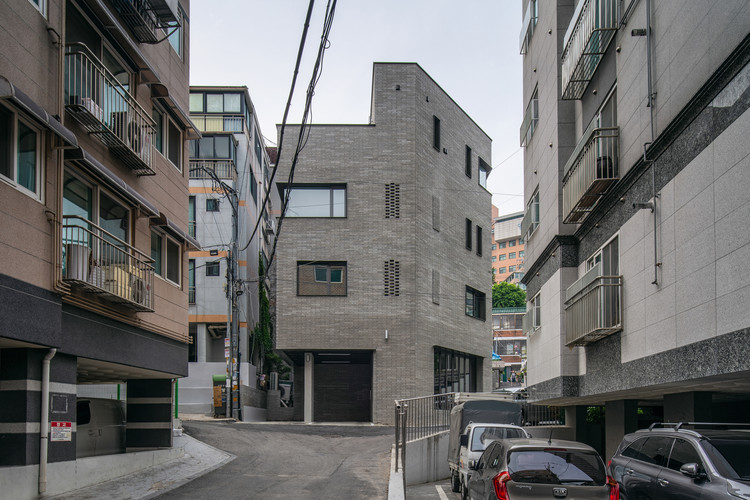 Text description provided by the architects. Project site was the third land where clients and architects had their heads together. The young couple in their early 30s, who wanted to find joyous inconvenience in their own home away from the agreed uniformity overshadowed by life and convenience in their apartments, took their young daughter's hand and carefully sought the architect. The builder was pleased to assist the couple in the will of the first land where the deal was not made and the third plan was finally settled. The living conditions for a mask apartment are unexpectedly simple. A house where children can play freely without worrying about noise between floors, a house where they can enjoy a life with a yard, and a house where I can make the basis for it, not a framework that matches me.

The couple's request also did not deviate significantly from these conditions, but there were additional conditions for the completion of the project. In order to cover the murderous cost of land and formidable construction in Seoul, rental areas should be secured and planned as commercial houses. To this end, the architect planned the neighborhood living facilities on the first floor of the four building-able floors, and the rental generation with a wide acceptance spectrum on the second floor in advance so that rental areas and conditions could be finalized early, thereby helping clients operate the building costs efficiently.

After planning the rental section with a single step to solve the construction cost, the residence space was trimmed with a long breath. The client's demands were simple, and they worked out the design from dividing the couple's and their children's bedrooms, living rooms and kitchen and dining rooms on the third and fourth floors. While satisfying the universality of a two-story house for a family, the architect proposed the overthrow of the program to counter the specialty that the two floors were located on the third and fourth floors of a commercial house.

If it is common for single houses to place public spaces, such as living rooms, on the lower floor and private rooms on the upper floor, the architect suggested placing each bedroom on the third floor from the public stairway to the front door, and a living room, kitchen, and restaurant on the fourth floor, where the terrace occurs due to the retrocession of the solar right. For those who had been trapped in the universality of apartments, the space structure from the front door to the living room was marked as a formula, but the client happily accepted the unfamiliar space structure after understanding that by putting the public sector on the upper floor, the drinking space and terrace yard can be connected and the noise between floors can be avoided naturally.

After the yard on the upper floor and the bedroom on the lower floor, the vertical movement of the house was forced to mean more than just a staircase. It had to be a place where you could greet your family after returning home, where you could naturally lead guests to the upper floor, and it should be a place where children downstairs and their guardians could easily communicate. To that end, the four-story slab will be opened small, with the opening and the wooden staircase that will also be stored for storage, but the children's room will be placed just below the opening so that they can easily look down from the living room on the upper floor, and the living room will be used to stay with their friends for a while in front of the visit.

As the living room on the fourth floor devoted a generous floor area to the opening, it placed a net playground in the opening so that children could have an exotic experience, and placed ceilings on it to give them bright and warm light to the room in front of their children's room. For a family who dreamed of changing their lives through space despite the difficult process of building a house, we hope that a big change in life will begin from the feeble change of the upper yard.