Save
Arc by the Sea / Bar Orian Architects 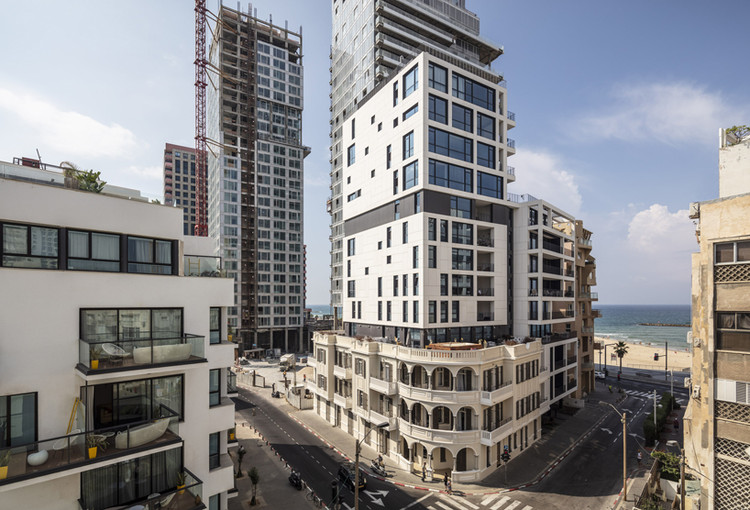 Text description provided by the architects. The residential/hotel building on the corner of Trumpeldor and Hayarkon Streets Tel Aviv showcases the story of urban renewal and of the evolution of the city’s architecture. As part of the city plan, and unique to this lot, Bar Orian Architects saved the building from demolishing, intended for the widening of Hayarkon Street. The city then provided guidelines for preserving the building and for constructing the two new residential buildings.

The underlying understanding was that options for connecting the eclectic-style, 1920s corner building to a contemporary residential tower were limited, and that new tactics were to be sought for making a new, coherent statement. We chose two main tools – contrast and volume division. We created contrast between the new and old using a current architectural language, one that neither mimics that of the structure designated for preservation nor tries to maintain it. This goes beyond being an esthetic decision – it is an ideological statement that architecture should be true to the principles and spirit of time of its creation.

Applying volume division, we defined five secondary volumes, one of them being the building designated for preservation, which created a visual division and an affinity between the scale of the original volume and that of the new ones. Between the volumes we planned detachment floors, emphasized by recessed construction and dark surfacing. Another vertical detachment was planned between the new buildings, connecting each of them separately to the urban scale, obscuring the feeling of a long facade.

Often, towers are surfaced with anonymous curtain walls. It was our decision that the building’s design will be an attempt to relate to the architectural tradition of Tel Aviv and to the low residential buildings of the city’s center. We surfaced the facade with white cement boards of various sizes, and designed windows of non-uniform size that hint at the internal functions concealed within them.

In designing the facade, we also had to consider the stairwell core and the secure spaces that were placed on the busy facade toward Hayarkon Street, using fireproof windows for the staircase that, for the most part, blocked the natural light, allowing additional opening of the facade. A vertical and horizontal gradient, created by the window arrangement and sizes visually transforms the facade, with varied opening that begins in the east facade (facing Hayarkon Street) which is relatively closed, through the north facade, all the way to the west one, which is completely open and offers sea views from all apartments.

The back facade of the building designated for preservation is revived through the building’s interior design, the green-wall interior of the residential lobby that stretches three-stories high. The main entrance connects old and new, residential tower and hotel. The facade of the building designated for preservation and the historic woodwork combine with technology and contemporariness, as clearly seen in the vehicle-receiving space visible from the lobby. The architectural evolution of Tel Aviv emanates from its past which is the opening phrase to a new architectural narrative. 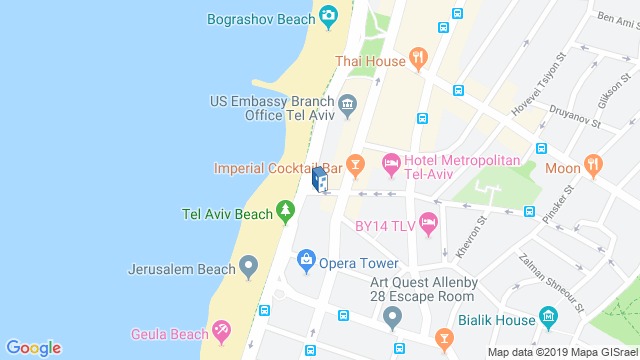 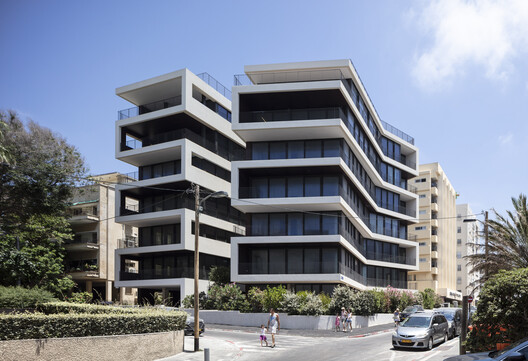 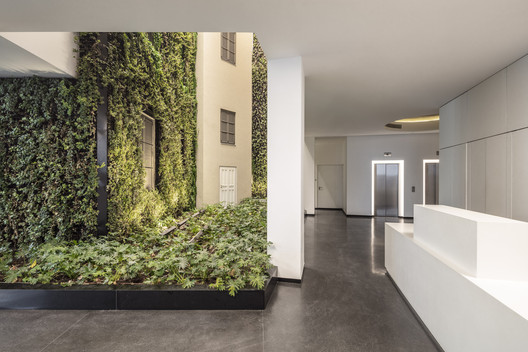 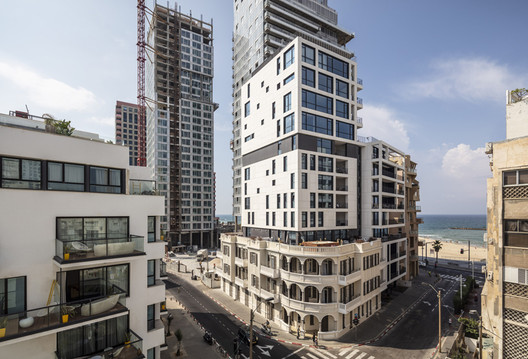