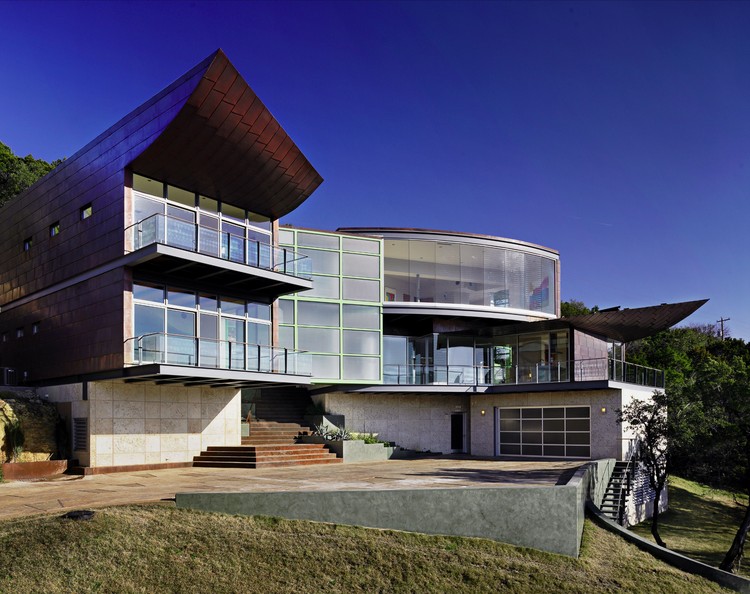 Text description provided by the architects. Soaring Wings was designed by architect Winn Wittman and built for an undetermined client in the early 2000s. The home’s name is derived from the large copper wings, reminiscent of birds of prey which circle the Texas hills. The home is separated into a public volume, containing the living, eating and entertaining spaces, and a private volume, containing the bedrooms, separated by a two-story glass and steel bridge.

Two large wings face the west façade, clad in copper, which provide both sculptural expression, and shading. Motorized mesh shades programmed to an astronomical clock raise and lower with the sun. The home is highly energy efficient, despite the many windows, due to bio-foam insulation, low-e films, and passive solar technologies. There is also has a provision for rainwater collection. There is a three-story elevator which makes the entire house accessible. The courtyard, carved from the hillside in back, contains a salt-water pool, and Zen-like rock garden, and is a private refuge from the hot Texas sun.

The owners believe the home is a complex, rich, and ultimately satisfying framework for their life. Soaring Wings has won a Dream Home award for Best Contemporary Home of the Year, and was selected as Architectural Record's House of the Month. The project has also been published in the German book Die Neue Villa, 2009 and a Chinese book 50 Top Houses, 2011. The home has also been featured in such magazines as Robb Report, Spaces (UK), HOM (DL), Objekt, (NL) and Hinge (HK).