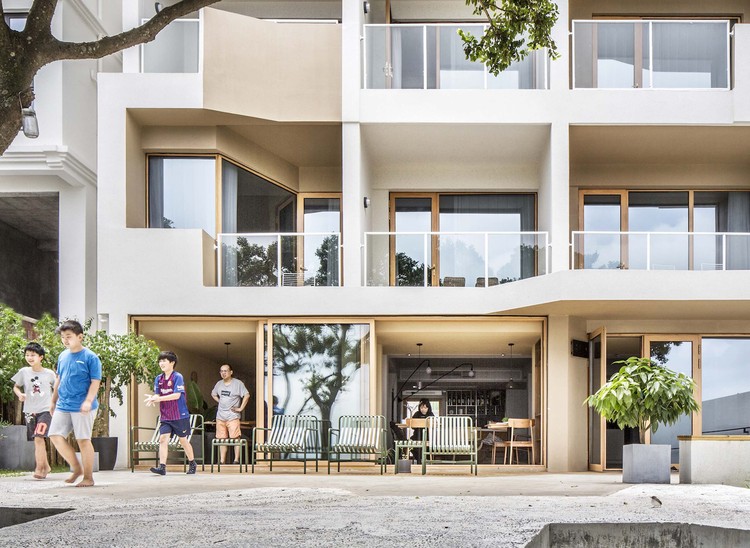 Text description provided by the architects. One day in August 2018, a friend came to us and said they wanted to build a beachside hotel, while their old house was under construction in Zhujiajian island, Zhoushan. The couple are both filmmakers, they fascinate in the peace and simple lifestyle of the fishing village in the old times, and always want to do something for their hometown.

However, memories are always better than realities, the village is no longer a quiet place. When we first visiting the site, we found that the whole village was becoming a big construction site, each family wanted to build a “European Style” villa, which is the same as other countryside in Zhejiang Province. The fishing village was full of anxiety and uneasiness.

The site is right at the north-west part of the village, facing the bay and a sandy beach. The main structure of this four-story building was almost finished when we began to start the design process, neighbours on both side were under construction at the same time, with a intensive distance of 2 meters from each other. The assignment is to design a 12-room mini hotel with this circumstance. Confronting the overwhelming “European Style” facade language which was fullfilling in the fishing village, we started with resistance instinctively, and turned to find an alternative way within the context of architecture, so as to bring another possibility of the site-specific residential building.

The experience of traveling on the long coastline of south-west Europe may provide us some inspiration to redeem ourselves from the narrow formal language and a frenetic consumer world. Le Corbusier once described the house on Capri as “A continuation of rock, a branch of island, buildings growing like lichen from the land of Capri and becoming a tool for gazing into the nature”. Those sturdy villages, made up with granite and limestone, grown on the hillside of the sea, and closely connected to the earth, have a rough character as well as a site-specific identity. On many Zhoushan islands, the building type in the fishing village has already experienced several evolutions: from the earliest single-story stone house to the prefabricated concrete building with an external balcony on the second floor, until the recent reconstructions, the cheap and vulgar “Euro-style” facade decoration brought by mass-production has become the dominate building style language, with the completely abandon of necessary functional space such as balcony, terrace and so on.

We decided to find a way to define spatial patterns by the building element itself, instead of the decorative facade. The former floor plan layout required more usage area but ignored the interaction between building space and the sea. So we intervene the original structure by bringing “balcony” element, resulting a new sea-viewing interface. With the inspiration of Can Lis from the great architect Jorn Utzon, the added-balcony not only enrich the spatial layer from the interior to the seaside, but also form a “frame view” from the inside-out, which could benefit each room for its unique seaside view. Rather, this approach provides a more intense way for people to perceive the world outside the building from the inside-out than the extra-open view of the sea. For the people in the room, “frame view” is also able to avoid today’s chaos in the fishing village, and alsohelpspeople more focuse on the sea in front of the tranquillity.

On the south side towards the mountain and the way-out the village, the added-balcony brings a stacking form, simply and powerful, which is also indicating the mountain shape. We hope to give the building a soft character with a roughness surface, like the flowers growing on the seaside reefs. We are also trying to find the simple building features after stripping away its vulgar decorative symbols, it could be functional and site-specific, it might also be literary and lifestyle. We hope to provide the local people the other possibility with these simple facade language, instead of the symbolic “Euro-style” decoration, so that people who live by the sea could able to build  houses with the primary consideration of their own lifestyle, rather than defining the self-identity by blindly following the symbolicbuilding facade.

People living in the village often gathered under the trees in the past, we hope to maintain this traditional living activity in the new place. The height difference on the original site is preserved, and the new design creates a continuous landscape experience by guiding movement from the seaside to the front door. The path starts under the tree shadow at the north-west corner: you turn back to the sea, enter the front gate, go up the steps alongside the wall until the sea-view platform. The platform is built with the five trees originally on site, as an extension from the internal floor to the sea, forming a fold-shaped retreat to the open field. Three different materials is applied to this geometric platform in order to form a wave-like pattern, and connect the wooden floor to the sand beach. On the platform under the five trees, the master grown up in the village would invite neighbors and passers-by to come and have a drink, it is a childhood memory, and also for the back-feeding of hometown.

As a resort space, the design also paid more attention on the interior public space. We set two public space in different levels, with the sight view of sea and mountain. For the sea side, it is the main living and dining space on the ground floor, providing reception and leisure functions; while the sky living room which is facing to the mountain on the fourth floor, is used as the sharing living space for the upper level rooms and attic room.

The original ground floor has lots of columns and a very limited height, so we introduce two colors to create the space, by contrasting partitions in yellow and white. The surrounding yellow part is used as front door, dining space and tea bar, while the central white part, which is wrapped by the yellow, is used as reception and leisure space. We deliberately exposed the beams and columns in the white part, and illuminated them by indoor lighting, so as to show the tension of the building structure themselves, and it is also good for increasing the comfort in the low height space. We also design a four-glass sliding door,  which can be completely open,  allowing the integration of the interior space and the exterior sea-viewing platform.

Limited by the rural construction technology, there are many dense column space in the building, however, it also helps to create an abstract experience with the building elements themselves, for example, by exposing structure and contrasting with different materials. The space is ought to be simple, and make others focusing on the sea and the dispearing horizon . One can also spend a whole day quietly in this space, willing to catch the experience shifting between the monumentality brought by dense pillars and the everyday nature of the seaside life.

The Summer Hotel renovation project lasted nearly one year from design to completion. It is a very difficult time during the construction process, due to the ambiguous local management policy and the complicated neighbourhood relationships. Once after it realized, every day you can see that passing neighbors and tourists curiously look out for questions. This also gives us more confidence of discovering the next generation building in the fishing village, with the concept of architectural elements and simple building language. And we also hope the building character and the functional space will bring people new spatial awareness of architecture and help to develop a local daily life. 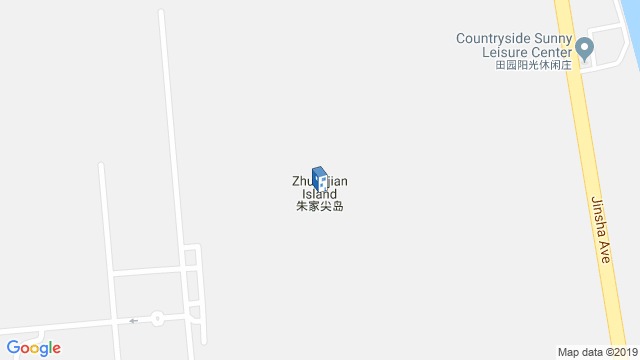 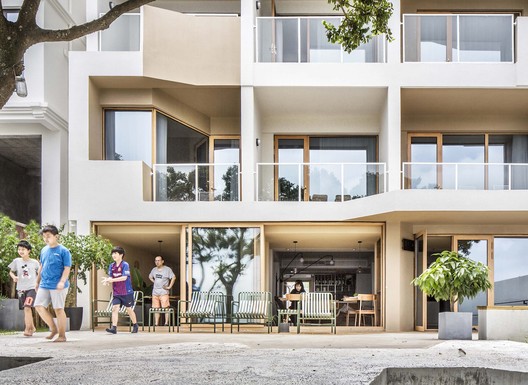