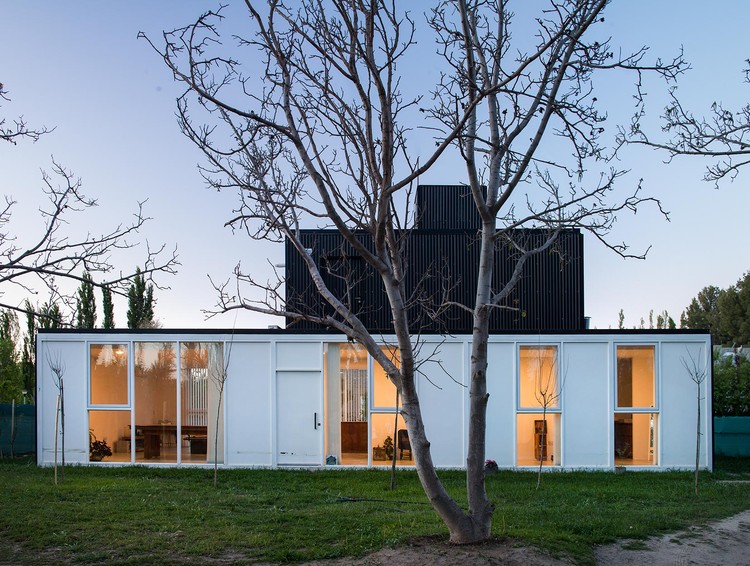 Text description provided by the architects. This project is developed as a metal box covered with metal sheets on the east and west facades. The north and south sides are left ajar to the visuals of the longer sides, having contact to the exterior. This relationship with the surrounding environment is based on controlling the privacy of the home and solving the needs raised by the people who use it.

The project is located in a neighbourhood on the outskirts of the city. It covers an area that corresponds to the established regulations of building surfaces, creating a rectangle of 107 m2 of covered space on the ground floor and 32 m2 on the upper floor.

The metal structure is covered externally with an opaque ventilated sheet as a skin on the sides, while the front and the back facing sides are resolved by using carpentry with transparent and blind openings, according to the needs of each space. The flexibility of the north-south facades allows the house to have cross ventilation in all the spaces to provide thermal comfort and to save energy.

The constructional decisions of the house were based on the premise of a fast and orderly construction. The problems of the work were measured according to the technical possibilities of the place. Thus, a dry construction method was chosen, which through a structure of modulated metal frames, not only creates a structural arrangement but also gives the floor plan flexibility. This structural regularity allowed the use of construction components and auxiliary elements in the most rational way possible, reducing the range of materials and solving the entire constructional work with four types of structural pipes.

The house has a central service core, leaving the location of the primary functions on its perimeter, thus achieving free movement over its entire rim. A series of modulated fabrics, glazed and opaque, opens and closes the contact with the outside.

The research was focused on the development of a metallic construction system, maintained as a visible element in the house and conceived through a precise and orderly construction system. The distances between columns define a basic module, which dominates the resulting form. Here language is deduced from a discrete and rigorous architecture, achieving a univocal relationship between visual order and the construction system.