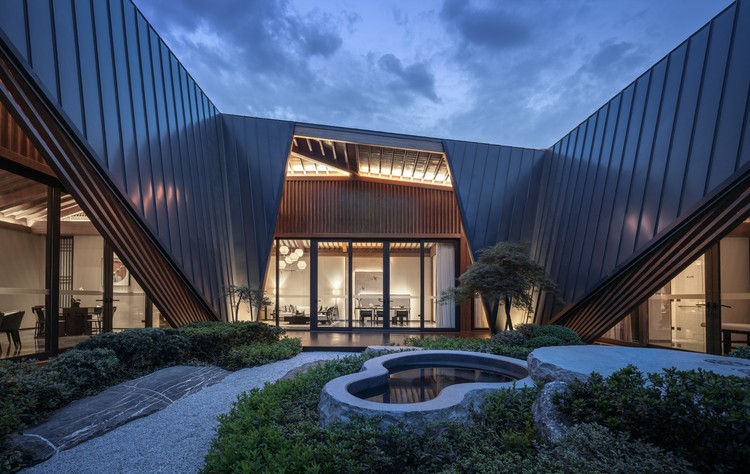 Returning to Simplicity
The beauty of Wabi-sabi, while moderate, modest and pure, also expresses vitality. The designers of this project pursued the simple beauty of nature, which is fitting in its own right, ultimately returning to simplicity after careful revision.

Vision Beyond Appearance
This project is situated in Luozhou Town, Fuzhou, which is known as a town of hot springs. It has three lanes and seven alleys in the north, as well as the ancient town of Luozhou in the south. The base is composed of three plots. The luxury SPA resort lies at the northeast corner of the base and is connected to an inland river. To the north, it faces contiguous mountains that serve as its main scenic view. The buildings are based on the place. With oriental culture as their main theme, they go beyond material and functional pursuits, and they mark their spatial attributes with culture.

Oriental gardens are usually small yet exquisite, lonely yet mysterious, abstract yet profound. Located in such gardens, the buildings maintain tranquility and go deep, borrowing from the natural scenery and leading people to the quiet nature of Buddhism, which is both indifferent and tranquil.

Converting Meaning into Shapes
“Harmony, respect, clarity and stillness” are the spiritual essence of oriental culture. The SPA resort continues the style of traditional Luozhou architecture, taking the ancient town as the base texture and applying the form of courtyards and a symmetrical layout. Modern techniques are utilized to innovate on traditionally sloping roofs, as broken lines are used to create five slopes with an opening at the rooftop but running down to the floor, creating a corridor. The rooftops of the VIP SPA room and the dining hall follow the big overhangs of traditional architecture, but they are presented in a simpler way.

The whole space of the building changes gradually, level by level, while the heights of the rooftops vary according to different functions. As the most private space, the VIP SPA room has a lower rooftop with dynamism and stillness complementing each other.

The indoor and outdoor spaces are divided by glass and wooden fences to guide the sight and form three framed sets of scenery that include the mountains far to the north. With silence, light and shadow, the elements of architecture come closer to the nature of the world, allowing for greater resonance between people and the space. This is aimed at creating a spatial atmosphere in which stillness is maintained in a noisy neighborhood.

The architects turned their designs into intangible visions by Human-centered thinking, repeatedly weighing the details. Starting with the entrance of the building, people will feel warmth, elegance and simplicity. A large amount of finishing was applied to the outdoor space. CLT was used to replace traditional wooden apron to reduce com。plicated lines and to harmonize with the structure.

Shapes, In and Out
The designers fully respected and preserved the essence of the materials, using wood, a natural material, to ensure the “original color” of the architecture. The exposed glulam structure was processed as a plain surface, showing the clear texture of wood through a soft and natural gloss. Unlike other large wood structures, the small wood components that represent the “particlization” of materials have refined into modules to form building components.

The gambrel roof enriches the changes in the indoor space and breaks the original regularity. When light passes through the gaps of the wooden fences in the corridor, it is diverged more evenly and softly, balancing and unifying the indoor and outdoor spaces and speaking of “changes without traces” in the purest and simplest language.

Constructed Based on Shape
The glulam structure was constructed in the winter and took only two weeks. Walls and rooftops made of wooden components were prefabricated and assembled on-site, and there were no installation errors due to an unstable environment or climate. To keep the texture and natural beauty of the materials, all wooden components are polished manually by workers, eliminating all redundant decorations and perfectly showing simplicity and harmonicity.

The connections of the variously shaped roofs are complicated and irregular. At the overhang of the eaves, the NLT technique breaks through the traditional beam and column system and realizes a big two-way overhang via the three-dimensional interlocking of traditional corbel brackets, simplifying traditional components with modern technologies.

The project ignores exterior decorations but pursues simplicity, nature and purity, making the space, shape, structure, surface and other elements of the building “invisible.” From the expression of form to the expression of connotation, the beauty of Wabi-sabi has been given new interpretations and explanations continuously. 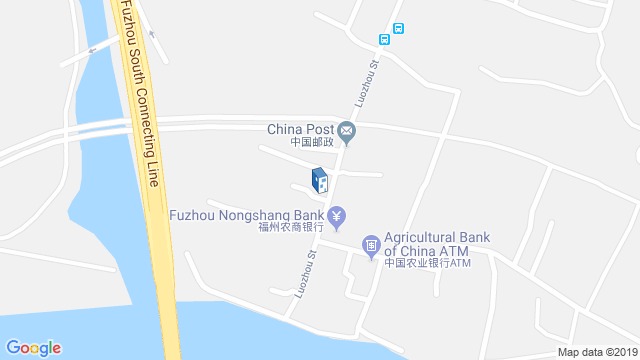 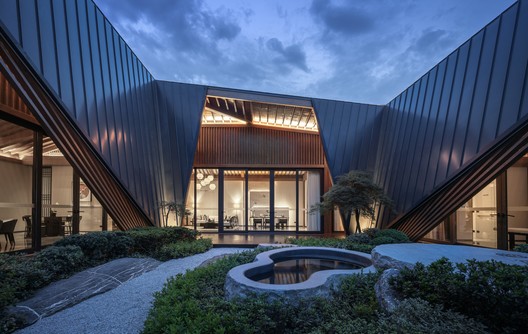