Save
House I / Thiermann Cruz Arquitectos 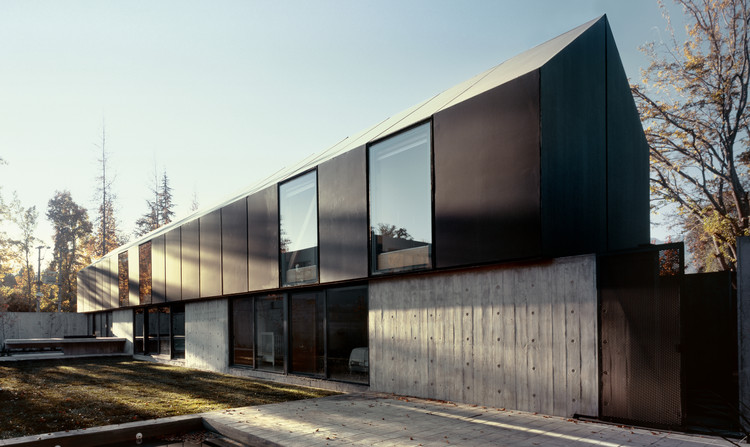 Text description provided by the architects. Good houses are artifacts that are crafted to conquer land as much as they are devoted to distance their inhabitants – as much as possible – from it. This was clear in Chile since the time of the colonies, and one of the few truly Chilean inventions, the so-called Casa Chilena or Chilean house, is the built manifestation of this. It embodies the specific typology of a courtyard house used to organize the territory based on agricultural production, but also a specific kind of domestic life detached from it.

And it embodied a circular time that organized cyclical rituals around the courtyards, galleries and enfilades, parallel to the cyclical time that structured agricultural production. Since the second half of the 19th century, this type faded away, not so much because of the obsolescence of its spatial configuration, but more due to the banishment of the specific kind of life and land that it previously organized.

Addressing a different type of land—and life—this house is located in a former suburban lot, now subdivided into three smaller pieces. This process of densification exemplifies how an urban configuration expands outwards in Santiago, colonising and occupying previous strictly suburban land. The house occupies the 20 by 40-meter plot with a thin 4.8-meter bar, subdividing the property into a series of different courtyards.

Each interior space is connected, at least, with two exteriors, which are treated, simultaneously, as interiors though their large built furniture and materiality. Negotiating the irregular shape of the plot with the regular geometry of the house, its limit is set back a few meters behind the property line, and a walled courtyard elbows out from the continuous line defining the sidewalk.

Overcoming the regulations promoting a garden city, the façade becomes a walled courtyard, bringing life to the edge of the otherwise life-less suburban street.

Doors allow subdivision and differentiation, but also flexibility and contamination among domestic programs. Kitchen, dining and living rooms, and patios can be combined into a single space or can be temporary divided depending on the season or whatnot.

The interior surfaces of the suspended volume are defined by a weaving of different kinds of wood, creating a relentless repetition of constructive elements covering walls, floors, and ceilings. 5-centimetre thick prefabricated black concrete panels hang from the wooden structure rendering the house completely opaque to the exterior. Similar to the residence that Des Esseintes designed for himself in Joris-Karl Huysmans’s novel: the fun remains in the interior.