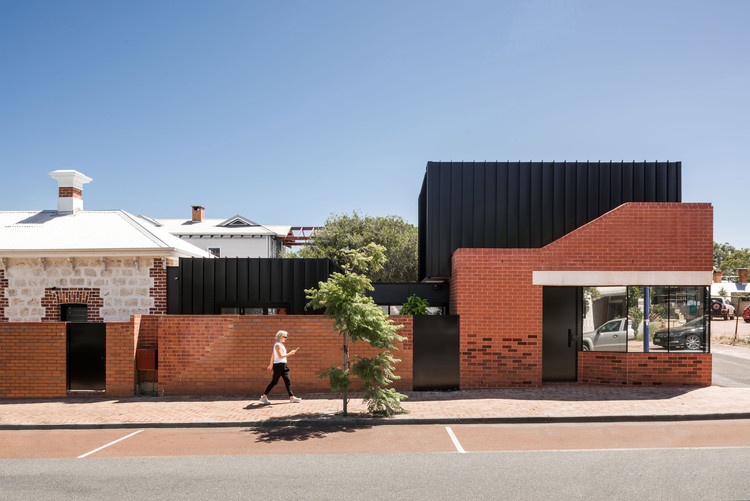 Text description provided by the architects. This Grade-A State heritage listed workers cottage on the corner of George and King Streets, East Fremantle, provided an exciting base to create a modern family home.  The concept was to respect and highlight the existing cottage by distancing the bulk of the extension to the ROW, linking the two with an internal courtyard.  With a mixed-use zoning, the home is designed with a self-contained office and bedroom which can be leased in future should the owner decide to do so.  The highly polished introduced finishes of “Nero Marquina” marble, white oxide concrete flooring and glossed black timber lend a dramatic contrast to the raw and matte finishes of the cottage. An intentional contrast that references the original materials with an opposing finish.  The owners intend to use the nearby parks and cafes as extensions of their home, hence gardens are minimal and low maintenance.

The brief called for a modern working family home; to be respectful of the much-adored cottage yet provide additions that functional and exciting.  There were minimal interventions to the cottage; insertion of skylights to hallway, conversion of existing run-down kitchen and bathroom into a larger family sized bathroom, powder, and laundry, reinstatement of original bullnose verandah and general restoration works.  Heritage Architect, Phillip Griffith, was engaged and his recommendations were adopted.  The only alteration to the existing external walls was to widen an existing opening to form the link to the new works.  New building walls were tucked under the existing eaves.  A kitchen, courtyard, office, garage and upper floor bedroom and ensuite comprise the new works.

A mixed-use zoning allows the office and bedroom suite above to leased out in the future if desired.  The ground floor office had to relate in scale and form to the neighbouring commercial tenancies on George Street.  Quality materials with reference to the existing vernacular of the area was crucial in maintaining George Street’s character.

The angled parapet of the office references the original cottage’s roof line; a suppression of building height through the centre of the site rises across George Street to align with the commercial parapets to the east.  Materiality links the project to its context; red face brickwork picks up on existing tuckpointing, and the concrete lintels a modern interpretation of the cottages lintels.  Three-toned glazed red brickwork laid in an ombre pattern wraps around the office, a play on the heritage reds of the cottage.  The charcoal aluminium cladding above was intended to recess into the background, allowing the street level scale to dominate.

Key to the brief was a sense of spaciousness on the small site.  Sight lines from the entry through the courtyard to the ROW was a key design move.  A dropped dark ceiling forms the transition from the cottage into the higher ceilinged kitchen.  Level thresholds and matching floor finishes run from kitchen through to courtyard.  Storage insertions into the existing bedrooms modernise the home respectfully; the robes do not abut existing surfaces.

Landscape was envisioned as an extension to the architecture.  Architects, CAPA, crafted various insertions; reflection pond, concrete BBQ plinth (a literal extension of the ground floor slab) and landscaping.  Jack Flanagan, furniture designer, was engaged to create a sculptural metal base to the freestanding marble dining table, which was designed to link into the fixed cabinetry.  Steele & Co steel fabricators collaborated in the design of the vertical fins filtering western sun to the upper bedroom and other custom steel elements. Commendation 2018 AIA WA Awards “Alts & Adds."