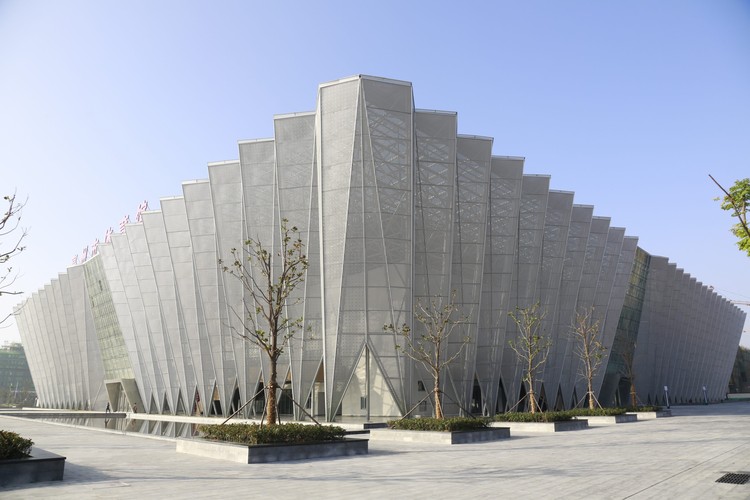 The roof space truss structure is supported on concrete cylinders and columns by fixed and unidirectional sliding spherical hinge support. The upper end of curtain wall trench is connected with the upper chord of the space truss through horizontal connecting rod, and the lower end is fixed hinge support.

Architectural Concept
Out of the pursuit of simplicity and publicity, Bozhou Gymnasium abandoned the traditional outdoor steps and two-tier platform. A circle of half-indoor and half-outdoor public space is designed between the main function volume and the outdoor environment as a space for people to gather, distribute and buffer. The public space on the east, north and south side is the public hall on the first floor and the underground courtyard on the West side. Vertical traffic is incorporated into the public hall, and the flow of people is introduced into the public lounge on the second floor through a wide staircase.

The three-sided continuous public hall forms an L-shaped grand three-storey high-shared space, which is a place for audience rest, event information transmission, news conference and other urban public activities. The roof of the hall is illuminated by transparent glass roof. The steel grid structure of the roof, three-dimensional honing on the side and hollow metal skin form abundant light and shadow effects in the sunshine. Steel structure three-dimensional honing shrinks into a continuous triangular "columnar" at the landing site. People can travel freely inside and outside the building. The functional significance of the gate no longer exists, but is a symbol. The city square naturally extends to the inside of the gymnasium, and integrates indoor and outdoor space. It realizes the real "publicity" of public buildings in space, thus creating a "city living room" open to all people all the time, and realizing the ideal of "returning space rights to the people" through the design of public buildings.

Constraints and Solutions achieved
Contemporary sports facilities are faced with challenges of spatial organization - not only to meet the needs of conventional competitive sports competition and training, but also to take into account the needs of citizens for fitness and the commercial operation of gymnasiums. This requires the gymnasium to be more flexible in the organization of functional space, higher space utilization rate and maximum value. We divide the main function of the gymnasium into two independent and closely related volumes: the east part is the gymnasium, the main entrance of the audience is set in this direction; the west part is the relatively independent training hall and the national fitness function.

Even in race time, it is possible to use two areas at the same time without interacting with each other. The two functional spaces are combined organically, taking into account the different demands of space functions in both race and non-race periods, and satisfying the flexible and changeable requirements of functional space in operation. The architectural form is also integrated, and the unified, complete and pure volume realizes the symbolism of public buildings.

Details of supporting structures/ancillary facilities/parking/access/circulation
The Bozhou Stadium Project, completed in 2018, is located in the southern New District of Bozhou City, Anhui Province. It covers an area of about 82,000 square meters, with a total floor area of about 48,650 square meters, 1-3 floors above ground and 1 floor below ground. The venue is positioned as Grade B medium-sized venue with 4371 fixed seats and 1652 temporary seats. After the completion of the stadium, it will be able to host large and medium-sized domestic and regional events, and meet the requirements of Bozhou to carry out fitness activities.There are 353 parking spaces on ground and underground. The underground parking lot has two double-lane entrances and exits, which are located in the southwest and northeast of the building respectively.

The east side is the main entrance for the audience of the stadium, across the street from the municipal park opposite of Xianweng Road, and the west side is the secondary entrance of the stadium. In planning, the buildings concede to the East and South Main roads, leaving a wide urban public space between the two main roads and building forms to accommodate the functions of evacuation, parking and landscaping. Plaza space is not only the ideal background for expressing the image of landmarks, but also conducive to the formation of more ceremonial places, which can accommodate mass activities of tens of thousands of people and meet the demands of large-scale mass gatherings. The gymnasium and its surrounding environment have become a stage to show people's daily life and social public life, bringing vitality to the city.

Details of landscaping etc
The architect abstracted inverted trapezoids from the shapes of buildings and utensils in the Han Dynasty as the basic geometric form of architecture, and used the square pools around the buildings as the horizontal "base" to foil the architectural form, emphasizing the purity and strength of the building. At the same time, through the reflection of the pools, the "rigid" characteristics of the building were softened and the landscape level was enriched. Shallow pools are also reservoirs for rainwater recovery and play a role in regulating microclimate. Especially in hot summer, they can reduce the temperature around building and send humid air into open public halls.

PROJECT AMBIT
Bozhou City, located in the northwest of Anhui Province, is in the southern end of the North China Plain. It is in the southern edge of the warm temperate zone, belonging to the warm temperate semi-humid climate zone. It has obvious transitional characteristics, mainly manifested by obvious monsoon, mild climate, abundant sunshine, moderate rainfall and distinct seasons. Because of the transitional climate, there are frequent confrontations between cold and warm air masses, changeable weather and great changes in inter-annual precipitation. The average annual temperature of the city is 14.9 C, the average sunshine is 2184 hours, the average frost-free period is 213 days, and the average annual precipitation is 831 mm. Based on the above climate characteristics, in the construction of half indoor and half outdoor public space, the design of the outer skin of the building is particularly important, which needs to play a role in regulating the microclimate - shading in spring and summer, as well as cool convective wind; and direct sunshine in winter.

In this project, perforated aluminium sheet is used as outer skin material, which is attached to the structure skeleton. After repeated deliberations and field tests, the diameter and spacing of the epidermis are determined to be 4 cm and 6 cm respectively. The final result achieved the semi-transparent effect that the designer wanted to achieve, while losing the sense of "weight" that the landmark building should have. On the one hand, the hollow outer skin can effectively shade the sun, on the other hand, it can "filter" the outdoor air through the holes and slowly send it into the public hall. In the hot season, air conditioning system is not used to ensure the comfort of public space. The horizontal trench of the roof is a transparent glass skylight. Although the summer sun shines directly from the upper part, due to the opening of the space and the effect of convective wind, the sunlight will not cause excessive thermal radiation.

In winter, the lower sunshine elevation angle directs sunlight from the East and south into the hall through the triangular corridor. Like a kaleidoscope, the public hall will show Bozhou's changeable weather throughout the year. It is a stage of sunshine, wind and rain. In different weather, it also becomes a wonderful stage of Bozhou people's public daily life.

Bozhou is a famous historical and cultural city in China. Many  historical celebrities such as Huatuo and Cao Cao were born there, which Breeding splendid culture of the Han Dynasty, the Three Kingdoms and the Wei and Jin Dynasties. "Han Style" is not only the requirement of the overall style of the city, but also the conscious choice of architects based on the principle of regional culture. The designer abstracted the inverted trapezoids from the shapes of the buildings and utensils of the Han Dynasty as the basic geometry of the building. The folded surface of the epidermis originated from the shoulder style of the warrior armor of the Han Dynasty. The folded surface of the armor was constructed by a continuous triangular three-dimensional space hone. The silver perforated aluminium plate was attached to the structure skeleton, reflecting the metal texture of the armor. Because the building shape is an inverted trapezoid, the continuous folded surface of the epidermis inclines gradually with the horizontal extension of the elevation, forming a dynamic effect, and opens naturally at the position of the main and secondary entrances, just like a stage curtain slowly opening.

SIGNIFICANCE OF PROJECT
As an important public cultural facility of a city, large and medium-sized stadiums and gymnasiums often bear the "mission" of the cultural landmark of the city, because of their relatively large volume, complex functions, large crowds gathering and complicated traffic flow. This makes the construction of gymnasiums become an important public event. Thus the publicity of buildings has become one of the important indicators to evaluate the contribution of gymnasiums to the city. The design of Bozhou Stadium focuses on the construction of public space and the expression of public culture. It transcends the requirements of the building's own functions and presents the "publicity" that sports buildings should have: the "city living room" that anyone can enjoy at any time, and realizes the social ideal of "returning space rights to the people" through the design of public buildings. 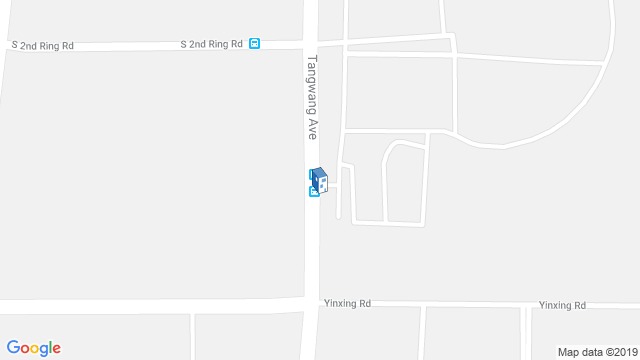 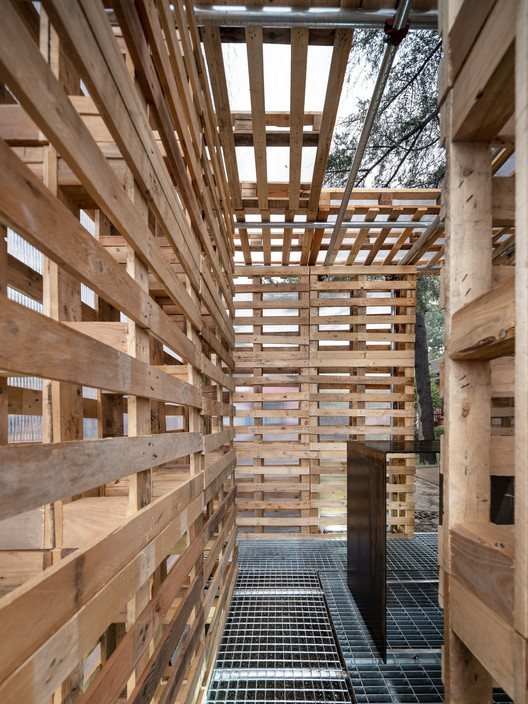 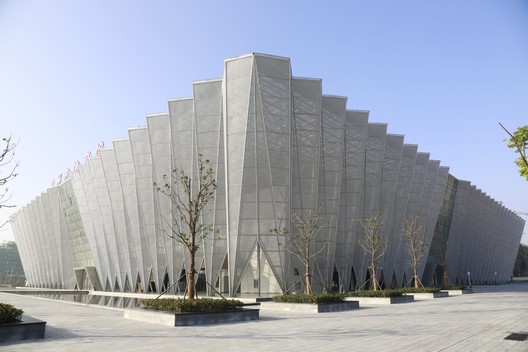