“The Forest and The Pavilion laid on Waves”is both a painting and a house. The courtyard is named Zisheng and located in the old city area of Beijing. The owner is Beijing Breeding Culture.

Introduction - the image association from the site
In the spring of 2018, we met this "garden" covered by shed cloth, which is about 200 square meters. You need to pass through a messy alley and then enter the courtyard from the north gate.The entire site is like a valley. Its west, east and south are all buildings, only the north side is relatively open. I tried to find the relationship between this courtyard and the surrounding old town.

I climbed the small white building in the south,and looked at the north on the roof of the 8-meter-high building, in which the orderly or messy roofs of Beijing traditional quadrangle courtyard continuously extends to desheng gate, just like water waves surging north, and pentium not stop. However, due to the additional construction in recent years, there are numerous attached buildings of various forms growing on the roof of the surrounding quadrangle courtyard, which are extremely rich in attitude. They have various relationships with the roof and the courtyard, such as embedding, hanging, leaning, and entanglement, which formedthe unique organization chaos of the Beijing Courtyard. This is also the status quo of most Beijing quadrangle courtyards.

These interesting relationshipsare the beginning of my thinking and design: Thinking of the roofs as waves, building a group of houses that grow on the waves...

Describe a picture
"A smashing and undulating endless stream of water, the water is rushing, the waves are rising. The waves are densely forested, and the rocks are smashing. The waves are on the pavilion, the floating pavilion is lying, and the boat is full of paintings. Tea, listening to the sound of the waves, fishing in the virtual boat. It is night, the waves in the forest, the bright lights rise, blend into the boundless ink, the waves are endless." This is“The Forest and The Pavilion laid on Waves” I think of, and the picture I want to build.

Building a picture
Starting from the picture, I divide the transformation process of the entire building into "five steps." The first two layers of "step": such as painting, the beginning of composition is to construct the large form - the "wave". The first layer of "step" is the house wave, which is layer upon layer, and forms a big gesture of the waves. The second layer of “step” is the ground wave, which reinforces the concept of the wave and forms the platform foundation of the building.

The next two layers of "step" are the long pavilions, which form the mian tone of the picture. The long pavilion is the house itself. The first time the long pavilion stationed is the main building under the curved wave, which is the process of building the wall. The second time is a flat roof pavilion floating on the "wave". This type of house has a categorized name -"Fu Ge". The spatial combination between the various pavilions forms the main layout of the building and also constitutes the large frame of the picture.

Finally, the stationing of the "Layered Forest" is a process of portraying and perfecting the picture. It’s mainly composed of doors and plants. The doors are imitation of the forest, and the plants are forest. The vertical door is either real or virtual, and intertwined with the fresh pine and bamboo to form a layered forest in the wave.

The opening and closing of the door between the East and West courtyard forms a rich courtyard space in the square, which is suitable for moving and static.

Open the door of the entrance bridge, you can directly view the landscape of pine trees and stones on the south side of the pool.

The rock on the surface of the ground wave create an artistic conception of water and stone, forming a stacked stone landscape.

Open the solid door between the west courtyard and the east courtyard will allow this two courtyard to be integrated into one and maximize the courtyard space.

Painting to space
Painting is one of the most direct forms, endowed with functions, and completed the basic construction by the expression of objects. In the picture, the mimicry words "wave" and "pavilion" are the core of the vivid atmosphere. Architecture is an act of realizing material creation, intention, structure, material and node connected with each other. From the picture to the building, it is the transformation process from "wave" and "pavilion" to the roof, the ground and the building.

Stacking wave
Waves have curved surfaces and arcs, cascading ups and downs, and potential stretching. There are crest and tail, crest high and tail low.

Build a "wave" roof
It needs to simulate from the roof form and tile method to make the roof like wave. In the design, we usethe curve of the roof to compare the posture of "waves". The curve of the roof comes from the curve formed by the folds of the Beijing quadrangle courtyards’ roofs.We also give it the action of “stacking” to create the momentum and emotion of the roof, thus forming a high and low roof form.

The roofing materials are made of slate and stacked on top of each other to form a line texture. It’s also simulate the shape of the wave from the material as far as possible.

Roll a "wave" terrain
The waves of the terrainrise from the ground, like the wind and the clouds. Formally, it starts from the pool in the east, and finally ending under the west wall. The pool at the starting point is a place with real water waves. The concave curved surface forms a wave at the edge of the pool and naturally turns to the east courtyard. This wave tip also forms a good boundary between the pool and the east courtyard. This is the most subtle place to convert.

Long pavilion
The pavilion is a general term for two types of buildings in Breeding. One is the main building of the curved roof that grows in the "wave": water gallery, drawer hall, pine garden, water courtyard, Yun room, etc. The second is the flat roof pavilion floating on the "wave": Shisongwu, Xiaohuopodi, Xiechunfang, Tiyunfang, Haitangjian, etc.

The room that grows in the "wave"
One: water gallery
The water gallery is located at the east end of the courtyard. It is a building built on stilts above the pool. The west elevation of the water gallery is provided with rammed Windows. The branchesof Windows make the space flexible and form a transparent pavilion and gallery space.

The south, north and west facades of the water gallery are all maintained by glass. There is an empty space between the glass wall and the courtyard wall. All three sides of the corridor are wrapped in bamboo shade, and surrounded by green color all the year round.

The ground of water gallery is paved with clear glass, and the sense of all water wave exists below glass truly just like you walking on water surface. Sitting there, the imagination of red fish swimming at the foot has becoming reality.

Two: drawer hall
The drawer hall is the main building of Dongyuan. It is called the drawer hall because it has a removable box inside the courtyard. When the box is pulled out, it is integrated with the lobby space to form a large event space. This is also a discussion of flexibility in my architectural practice.

Three: Yun room
Yun room is a tea room on the second floor of the West Garden, which is used by hosts.You need to step on the rocks, and climb up the steps along the south wall ladder.It’s pine forests and waves when you open the window.

Four: Songyuan
The Songyuan Room is one of the main buildings of the West Park. it is called Songyuan because of a pine tree with a neckin in the courtyard,. The independent courtyard paving in the northwest corner continues the practice of paving the land, which is a continuation of the waves.

Five: Water House
The Water House are located on the west side of the Songyuan Room. Its southern courtyard is a shallow pool. A staircase is hoisted on the west wall of the courtyard, leading to the tea room on the second floor of the guest room. The south side of the room is surrounded by three sets of grille door. The east boundary of the room is intersected by three sets of solid wood door. When the east door is open, the line of sight can penetrate to the water gallery.

Pavilion floating on the "wave"
One: Xiaohuopodi
Which was taken from the poem "Fish and bird living outside，have a good reading on bed." Xiaohuopodi is a two-story pavilion with a lavatory on the first floor and a viewing deck on the second floor. It’s hanged on the south wall of the courtyard, half of it float above the water, and another build across the wall, Which was the tallest building in the east. Stay in it, you will see pine tree and stone aside, while the waterrushing the stone.

Two:Shisongwu
Shisongwu is a pavilion compared to a dock on water. It’s also hanged on the south wall, a bent pine tree that’s half-man high grows under the “dock”. Step on the pine tree and stairs above the tree, and stoop into the “dock”, you’ll see reefs and green pine trees in water through the glass floor of the pavilion.

Three: Haitangjian
Haitangjian is above the courtyard in the northwest corner and it is the tearoom of the Song Yuan. The tearoom is suspended in the courtyard, It seems like build above mountain stream. On the east wall the tearoom face to, we constructed a Haitang shape hole, a branch of a pine tree stretch out through the hole, that’s what Haitangjian means.

Four: Xiechunfang
Xiechunfang is builded on wave-like roof above the Drawer Hall. Because of a Cedrela sinensis outside the southeast corner of the courtyard, the Xiechunfang is rotated 45 degrees, to watch Cedrel asinensis in the room on “waves”

Five: Tiyunfang
Tiyunfang is located on the westernmost roof and it’s the tearoom of Shuiyuan. It is also the tallest building in the “waves”. Sit in here, taking the rope as a ladder, taking the moon in the clouds, watching the waves rolling

Conclusion
Space abstraction has always been an eternal proposition of architectural design. In the process of trying to find the spatial intention through abstraction, I combined the understanding of the painting space and found that in fact, for the design: whether it is abstract or figurative, they are just looking for a method with some kind of atmosphere property, and design In fact, it is necessary to obtain the unique atmosphere attribute of the space through the basic judgment of the site.

In process of the Zisheng Courtyard progresses from painting the conception of “The Forest and The Pavilion laid on Waves” to implementation, the picture repeatedly guides the construction, from form to material to method. The construction itself is also trying to restore the scene described by the picture.

This practice from picture to building is An Artistic Spaceconstruction based on simulation. It is also mybrandnew attemptabout how to construct a space with artistic meaning as an architect. 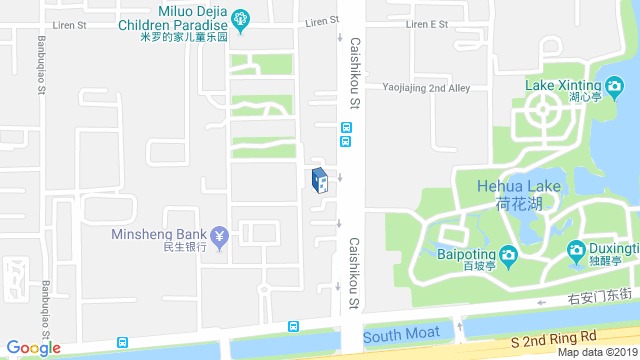 Location to be used only as a reference. It could indicate city/country but not exact address.
Share
Or
Copy
About this office
Jiejie studio
Office
••• 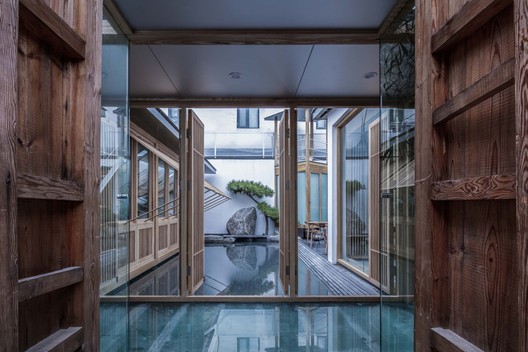