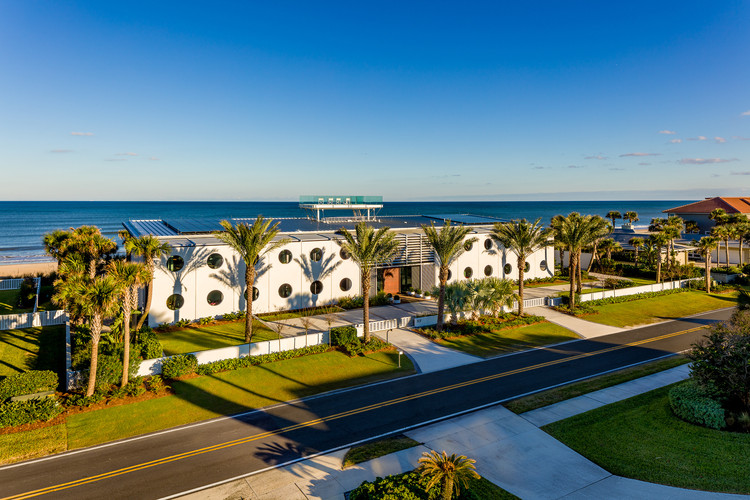 Text description provided by the architects. Architects Bryden Wood have completed a stunning beach-side residential retreat in Ponte Verde Beach, Florida. Inspired by both its tropical location and industrial design, the Beach Shack is a 900sqm home fitted with concrete interiors, innovative interventions, such as a retractable hydraulic staircase, and sustainable elements throughout.

The concept of the design, initially developed in conjunction with Sir Nicholas Grimshaw, is a continuation of similar architectural themes explored in a previous scheme in Germany, built for the same client. Comprising of two symmetrical wings that extend from a central foyer and entrance, The Beach Shack is a bold, linear residential project with striking facades. It creates panoramic views of the ocean and flowing movement through internal areas.

Beach Shack’s western, street-facing facade is built as a separate layer from the main house. It uses large precast panels dominated by a pattern of portholes. The facade shelters the interior from the West sun and generates transitioning temperature and lighting conditions. This zone houses a semi-interior garden that serves as a private interior space for contemplation. In contrast, the East facade is fully glazed with composite aluminum-oak sliding doors and window panels that open up and embrace the beach landscape. The sliding Alaskan yellow cedar louvred panels control the amount of light in the interior.

The interior space flows around the open foyer which links the kitchen, living room and library as a single continuous, fluid space. This is surrounded by a balanced combination of the exposed vertical structural concrete surfaces and polished concrete floor that forms the structure, softened by the deep timber mullions of the glazed façade, white walls, fun colourful furniture and art.

Inside is minimalistic and high-tech with guests greeted by a stunning retractable hydraulic powered staircase and three stainless steel, glass and timber platforms. The design is inspired by the industrial background of the owners, and was built to the highest standards by an experienced ocean front residential construction team, which included nautical engineers and fabricators. The central stairs, operated by two Hydraulic engines cylinders built into the platform, can lift when desired, freeing up the dining and living spaces to merge into one for hosting and events.The platforms articulate the space both horizontally and vertically at the heart of the house and take the user from the ground floor to the rooftop where the topmost platform rewards the visitor with a 360 degree panoramic view of the ocean and marshes surrounding the site.

Despite the tranquil weather of the spring and summer months, the area is subject to the effects of the Caribbean hurricanes. In conjunction with the exposed concrete structure, the house is designed of withstanding winds over 140mph. The ocean façade is completed with sliding Alaskan yellow cedar louvred panels to control the amount of light in the interior. The untreated timber allows the exterior panels to weather naturally with time.

The careful attention to the control of the direct sunlight and reduction in solar heat gains in all facades combined with integrated PV panels makes the house energy efficient and close to zero emissions. Again, sensitively working with the character of the site, landscape designer Ben Dinkins planted a variety of species indigenous to the region that blend well with existing beach dune vegetation. Further environmental damage was significantly reduced by use of deep orange lighting, specifically selected to ensure that turtles, present in the area during their reproductive cycles, are not disturbed by the lights at night.