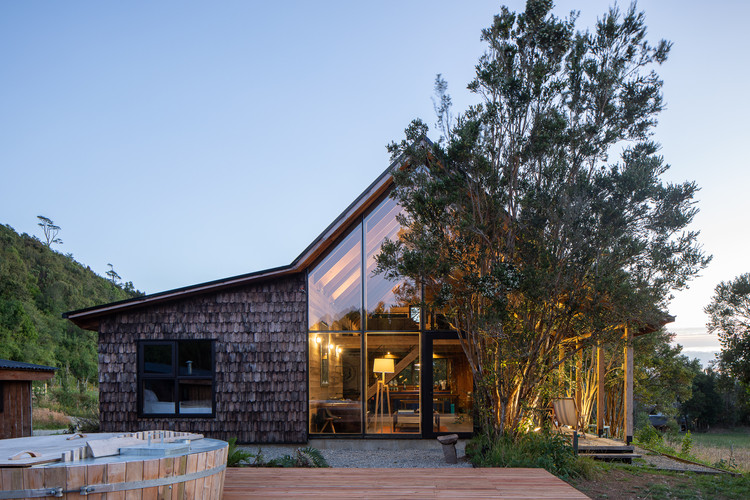 Text description provided by the architects. This lodge is a 120m2 house located in a rural scene in a southern region of Chile. The brief was to design a house with two bedrooms and two bathrooms with a main shared space, interpreting an old small traditional southern Chilean dwelling.

The challenge of the proposal was to get that traditional southern look, which implies very opaque facades, but with a full translucent side where the landscape and light can get inside the building, creating its own private world. The house is placed between a forest of native trees, giving its back to the main street. So, the house is oriented to the north and west to get the most of sunlight, which this south down is much appreciated.

The concept of the design is organized based on 3 contrast between old and new: Removing non-structural walls and floors: the main structural shape and volume are maintained the same as the old traditional house, but the interior is liberated from any non-structural dividing element, which helped to create a clean and continuous space.

Concentrating the apertures: The main source of light is the north façade, keeping the other free opaque as a traditional southern house would have, so the proportion of void and mass was not lost. Material contrast: Big floor to ceiling windows in contrast to recycled traditional timber shingles, an evident contrast between old and new.

The distribution of the house is developed in an almost square plan, divided into three volumes: The main one has the public areas of the house: kitchen, dining room, sitting room and mezzanine. The east one, the widest, has sleeping rooms and bathrooms with the main access of the house. And the west one is 1.5m wide acting as a corridor and informal dining room adjacent to the public areas of the main volume. The mezzanine is an opportunity to use the roof space, with a lot of light and natural heating, having control over the main space. 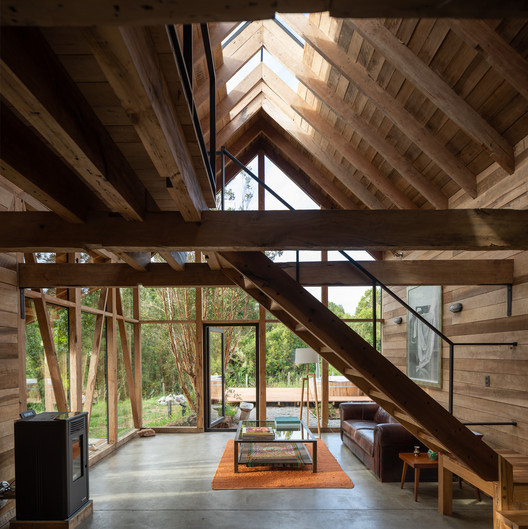