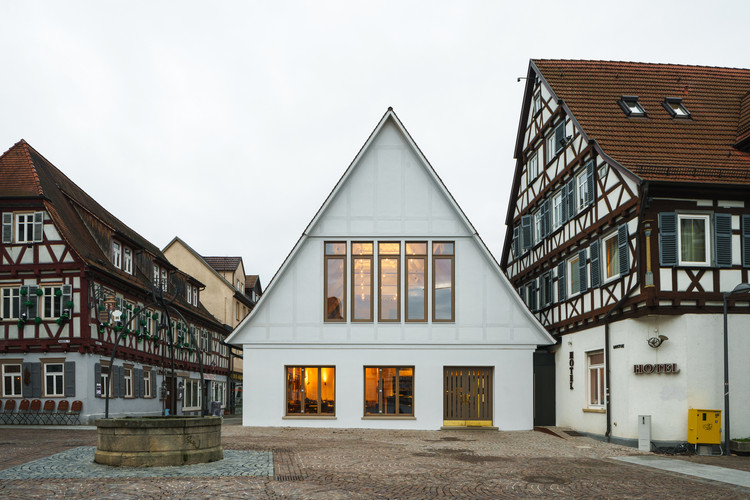 Text description provided by the architects. The medieval old town of Kirchheim near Stuttgart is substantially characterized by its small-scale edificial structure. At the heart of Kirchheim, the “Gasthof Waldhorn” — a run-down ancient inn — has now been demolished. Both the applicable building regulations with the city’s particular “Old Town Statute” as well as the city council with its designated architectural advisory board give little leeway to subsequent construction.

Based on that, the distinctive urbanistic footprint of the “Gasthof Waldhorn” was to be mimicked. At the same time, the city and its advisory board called for a contemporary new building that was to adequately approach both the aspect of timber framing and the town’s small-scale urbanistic structure.

From outside, the silhouette and the materiality of the new edifice appear similar to those of its predecessor and feature a dark tiled roof, walls finished with pale plaster as well as the visible wooden structure of the upward-stepping gable of the market-facing facade. In contrast to the historical neighbouring buildings close-by, the surface colouring may be more homogeneous.

However, due to its carefully manufactured timber structure made form brushed Douglas fir which shines through with varying intensity – according to incidence of light and the weather –, both the appearance and the impression of the edifice change constantly and naturally. The new inn “Gasthof Waldhorn” is accessed via the facade from the market. At the ground floor, the rooms are connected to the adjoining hotel via a contiguous dining area. The attic of the two-storey building contains the function hall, designed as an open-plan room.

The interior of the building is dominated by its architecture and simple materiality. The edifice sits on a massive foundation – made up of the basement with several secondary rooms and the wine cellar – that carries the ground floor – with dining area, kitchen and bar – which is again followed upwards by the wooden roof. Thanks to the visible wooden beam ceiling, this transition from heavy, massive structural elements to woodwork can already be divined in the dining area.

In the attic, too, all elements of the wooden roof truss are still visible while the complexity of the crooked roof that sits on the contorted outline of the former building can only just be assumed. The function hall itself opens up to the entrance with five generous windows in the facade, offering views on the bustling Kirchheim market and providing insights into the wooden interior of the attic from outside.

The building’s interior is further characterized by lasting natural materials. Among these are the large oakwood floorboards in the dining rooms, the downstairs stone floors, the plastered wall surfaces, the wooden windows and the visible elements of the timber structure.

Even the interior fittings follow this specific material concept, with old and new solid wood furniture completing the picture. With only one year of construction time and in a planning process that involved the constructor, the architects and specialized planners, the city council with its architectural advisory board as well as the interested and committed citizenry, a new urbanistic brick was layed in Kirchheim’s historical ensemble. 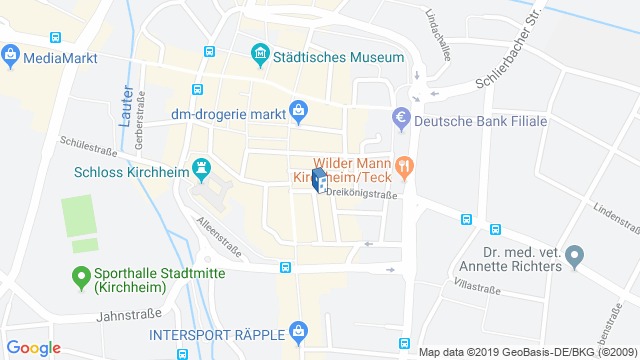