Adam Sokol Architecture Practice (ASAP) have revealed the design for a hotel tower made to be a piece of urban geology in downtown Los Angeles. Called the Spring Street Hotel, the project is designed to capitalize on the accelerating growth and development of the downtown LA area. Situated in the core historic district of downtown, the tower aims to build on its distinctive location and cultural context to create a landmark destination for the city. 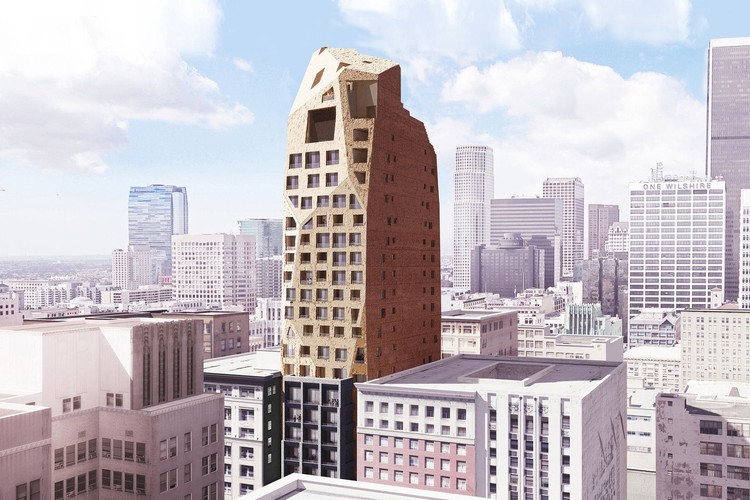 The new downtown hotel will contain 170 guest rooms, including about 20 suites. Public spaces will include a roof bar with pool, fine dining restaurant, garden bar with film screen, banquet space, conference facilities including screening rooms, outdoor whirlpool, retail space, business center, and fitness center. The lower levels of the tower are designed with a geometric grad which matches the height of neighboring historic buildings. This concept changes on the upper floors, which feature a sculpted rooftop culminating in a pointed crown.

As the ASAP team states, "The design of the hotel is based on the idea of a large rock in the landscape, drawing on a generation of land art in Los Angeles and the southwestern United States. It benefits from the tension with the existing historic buildings to create a distinctive icon in the landscape, framed by outdoor public spaces adjacent to the entry. Interiors will be simple and modern, using materials such as concrete, wood and glass, with a design tailored to emphasize the hotel’s cultural program. The roof bar will be downtown Los Angeles’ highest outdoor public space, with panoramic views of the skyline and mountains."

Construction aims to begin in Spring 2020 for the 28-story hotel tower. Completion is expected in 2022. 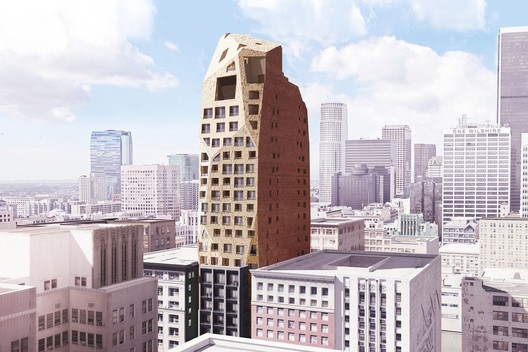