The new skyscraper will be sited on the corner of Second Avenue and Virginia Street, according to developer Pacific Virginia's design documents submitted to the city for review earlier this year. With a majority of the building's program dedicated to condominiums, the project will also include a hotel and co-working space. The new project's historic Terminal Sales Annex will work in tandem with the proposed hotel programming and the existing building's floor plates. Made with a series of vertically-oriented "regulating lines" and a stepped massing, the project aspires to aesthetically align with the existing historic structure.

Setbacks for the project will create a small plaza at the corner of Second and Virginia as a series "telescoping" volumes from the lot line are made to work with the geometries of the existing building. Spaces on the ground floor will also include a restaurant, elevator cores for the residential and hotel programs, and loading dock spaces. Renderings also depict vertical bands running up the length of the tower with an inset arcade and porte-cochere flanking the corner plaza.

A construction timeline has not been released. 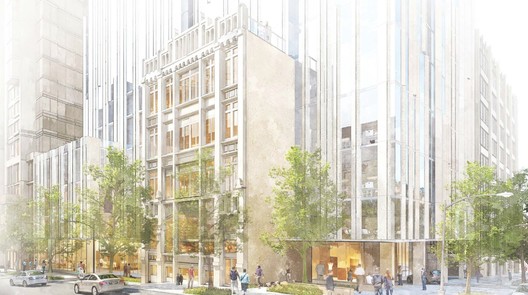