Ennead Architects has unveiled details of the Zhangjiang Science City, representing a conscious shift in the planning and design of large-scale urban blocks in Shanghai towards a human-scaled design that integrates a wide range of programs. Responding to a masterplan mandate, the scheme creates an open campus designed to foster a holistic built environment with a focus on providing a balance of living, work, and play spaces. 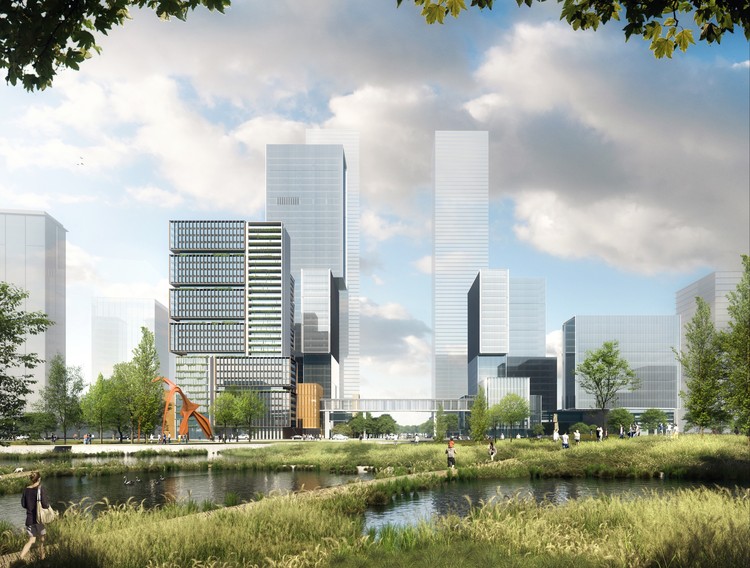 For the core of the Zhangjiang Science City in Shanghai, the team aimed to deliver spaces along an “Anti-Icon Iconic Building” ethos. Taking advantage of surrounding natural assets, such as the planned Central Park at the core of the masterplan, the Xiao Zhangjiabang River to the east, and the wetland park to the south, the design organizes five towers into an open, integrated network of urban gardens.

To merge architecture and landscape, a series of gardens at the ground plane and atop roofs connect people to nature and elevate user wellbeing. Central to the masterplan’s identity, the design celebrates the science of architecture by exposing the structural inner workings of a skyscraper and by expressing the various programs through a series of sheared volumes.

Recognizing the increasing collaboration in scientific research, three commercial towers integrate open spaces to foster dialogue. Specifically, the design is composed of a series of atriums, with remaining spaces designed as an open floor plate. The expansive atria are enclosed with a curtain wall that uses LED embedded scrims. During the daytime, these facades are translucent to allow for access to daylight and provide views in and out of the space. By night, the scrims turn into urban television screens to showcase scientific milestones. 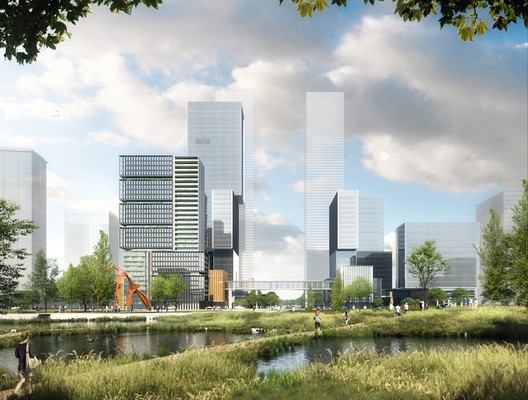