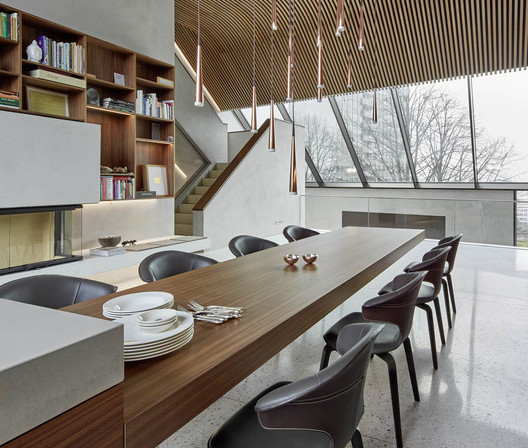 Text description provided by the architects. The Palmaille was layed out in 1638 for the italian ball game palla a maglio (dutch Palmaille), which is related to croquet, by the then-landlord of the slope along the Elbe between Altona und the bailiwick Ottensen. In order to create a “public alley” four rows of lime trees were planted along the bothsided lanes in 1717. Since the end of the 18th century mostly representative buildings were developed on both sides of the street. Especiallythe villas, the classisist danish architect Christian Frederik Hansen built between 1786 - 1825, shape the image of this boulevard. In the course of the 19th century, the avenue became a favored upper class residential neighbourhood.

In 1905 the almost 200 years old lime trees were fellt. Through replacement planting the wide green medial strip is again covered by the leaves of this time only a double-rowe of lime trees. In the air rades of the second world war the Palmaille was destroyed to two-thirds. For the reconstruction the „Decree for the design of the Palmaille from 9th of september 1952“defines: “As architectonic reference for the design of the northern side of the Palmaille serves the historic part which is still preserved on the plots with the street numbers 100-124.” The new building is comitted to this heritage. The upper class residing, which was almost eliminated by notary´s offices and shipping companys, should get a contemporary expression. The residential use on the third and fourth floor is complemented by an office use on the second floor. The entrance level serves for the technical and traffic circulation, parking and a room for the dissection of game.

The most beautiful house of the elegant boulevard, the “One-Window-House” C. F. Hansen built for himself, served as reference. In favor of a self-confident appearance he didn´t meet the lower hihgts of the neighbouring buildings and kept a distance to create the typology of a free standing house. According to the desire for an individual presence in the civil society a differentiated image evolved in the course of the centuries. This kind of self-concept of the owners established the character and mirrors the relevance of the palmaille for the city on the whole.

In front of this background the new building is also presenting itself self-confident. The distance to the neighbours, Hansen preferred for his own house, is recalled in the new design through glased setbacks towards the historic buildings. The preferred mediation between the different existing eaves heights was rejected. Which resulted in the extension of the eaves height and slope of the lower multi-storey-dwelling from 1790. The horizontal zoning of the Palmaille 100 of ground floor, main floors and roof is as well borrowed, as the motive of the gateway.

In following the historic garden salons and the depth of the adjacend building from the Wilhelminian time, the building is developed along the neighbours fire wall. Instead of a faceless fire wall, the new facade is defining the edge towards the green interior of the block. The site underlies an implementation programme, a design code, a social preservation regulation, a high noise exposure, is situated above a metro-tunnel, in direkt neighbourhood to listed monuments without basements. All this required an intense discussion and coordination with the town master mason, historic monuments protection authority, building authority, town planning office, district building counsil and the neighbours.

As a result of this effort, the design an function was approved by all parties and a building permission for 770 sqm, instead of the codified 350 sqm, was enacted. Conceived was a monolithic plastered masonry-building with a self-supporting concrete facade along the street, with concrete slabs and a bracing elevator core, without basement. For large scale glazings post-and-beam facades are introduced, smale openings are realised with window elements. The Terraces can be accessed via glas-sliding doors. The Profiles are powder-coated with a bronze tone.

The main escape route leads through the sculptural staircase of the four storeys building the second route via a planted ramp-building in the back of the building and hand ledders of the fire brigade. The landscape design for the new townhouse is characterised by the needs of the fire brigade and parking facilities. In the rear end of the plot 3 parking spot are placed an along the northern facade the emergency ramp is situated. The driveway leads through the building via a ramp to the parking area, which is one meter higher. The ramp for the fire brigade leads another one and a half meter up.

The steps and retaining walls made out of cortene mediate the hight difference and seperate the drive way from the with grasses and shrubs planted strips. The floor covering consists of large-sized cast stone paving slabs matched to the building facades, which is laid in the area of the pitches with grass joints. Sandstone-colored cobblestones convey in the entrance area between different heights as well as public and private. In addition to the old trees in the neighboring gardens, a large beech was planted at the request of the client, which offers effective privacy and an impressive eye-catcher right from the start. It is accompanied on the west side of the garden by three tall-stemmed magnolias. The enclosure to the north forms a beech hedge and to the east an evergreen bamboo strip. In the evenings, recessed wall lights in low height and a Ground recessed spot under the beech for a subtle illumination of the garden.

The material concept relies on a deliberately limited selection of materials whose surface treatment largely preserves the natural character and and allow aging in dignity. Sand-colored terrazzo for the floor, natural fine plaster on walls and ceilings, walnut wood for doors and furniture, as well as architectural bronze for separating rails and fittings prevail. For the terraces and open spaces a stone with natural stone surface was chosen, which is oriented in appearance on the terrazzo floor inside the house. glass wall separates the floor-level shower. Room-high glass elements in matt sandstone combine the wet room requirement with a comfortable atmosphere. The layout of the main bathroom is designed for washing, showering and bathing on the look-out into the green space. The guest bathroom receives a glass mosaic on the walls and on the floor aligned with the wood color. The main bedroom has a textile wall surface. In contrast to the more homely sleeping areas is the open spaciousness of the main room, which is oriented both on the front terrace to the green courtyard and on the studio glazing to the port. Here, the walnut lamella ceiling supports the warmth generated by the fireplace optically and acoustically.

With the implemented energy concept, the requirements of the Energy Saving Ordinance 2009 and the Hamburg Climate Change Ordinance are clearly exceeded. In addition to the high insulation standard of the building envelope with highly thermally insulated exterior components and windows with triple thermal insulation glazing, the geothermal heat supply contributes significantly to this. In addition, the concept for residential use provides mechanical ventilation with highly efficient heat recovery. A photovoltaic system with a capacity of 3 kWp covers about 25% of the electrical energy demand of the building. All in all, the implemented measures have reached an energy standard that falls below the requirements of the Energy Saving Ordinance by around 50%. The garage is equipped with a charging station for the electric smart and a dehumidification system for historic vehicles.