Argentine-American architect César Pelli, known for designing some of the tallest buildings in the world, such as the Petronas Towers in Kuala Lumpur, the Torre de Cristal in Madrid, and the Costanera Center Building in Santiago de Chile, died today at the age of 92 years, according to Juan Manzurel, governor of the province of Tucumán.

Born in Tucumán, he studied architecture at the National University of Tucumán. Marrying and emigrating to the United States, Pelli received his Master's degree from the University of Illinois, School of Architecture at Urbana-Champaign. Recognizing the prospect of a budding talent, a professor arranged for Pelli to work for Eero Saarinen, where he would work on notable projects such as the Trans World Airlines Terminal at John F. Kennedy Airport (1962) and the Ezra Stiles and Samuel Morse Colleges (1962, renovated by Kieran Timberlake in 2011) at Yale University. These early designs would prove prescient for an architect interested in publicness, materiality and formal expressions.

Pelli then became design director at Daniel, Mann, Johnson Mendenhall (DMJM) in Los Angeles, where his design for Sunset Mountain Park Urban Nucleus (1965) emerged from the crest of hill like a ziggurat carved out of the land. In 1968, Pelli moved on to Gruen Associates, where he was a Partner of Design. Advancing methods for steel and glass construction, notable projects at Gruen include the San Bernardino City Hall (1972) and the Commons and Courthouse Center (1973) in Columbus, Indiana.

On the verge of establishing his own firm and becoming head of architecture at UCLA, Pelli was instead offered the deanship at Yale School of Architecture, a position he held from 1977-1984 in New Haven, where Pelli Clarke Pelli is still based.

In 1995, Pelli was honored by the American Institute of Architects (AIA) with the prestigious Gold Medal Award. In 2004, he received the Aga Khan Award in Architecture for the Petronas Towers, and their harmony with Islamic culture in Malaysia. Pelli was honored with Cemex's Life and Work Award in 2006, and in 2012, the Konex de Brillante Award, the Konex Foundationdistinction for being the most relevant figure in the visual arts of Argentina over the past decade.

"Cities,” says Pelli, “are our most important responsibility. They are the whole of which our buildings are the parts. Making a building one with its place has been a constant goal of architecture throughout the ages. Technological and cultural changes have weakened this relationship, and it is the responsibility of each one of us today to consider it in our work."

A diversity of approaches and locales is the calling card of Argentina-born, America-based architect César Pelli (born October 12, 1926). The common thread of Pelli's work is a strong sensitivity to place and environment. 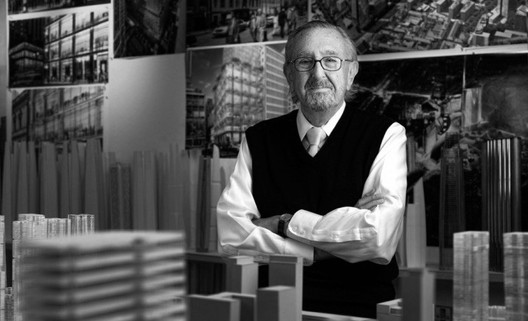