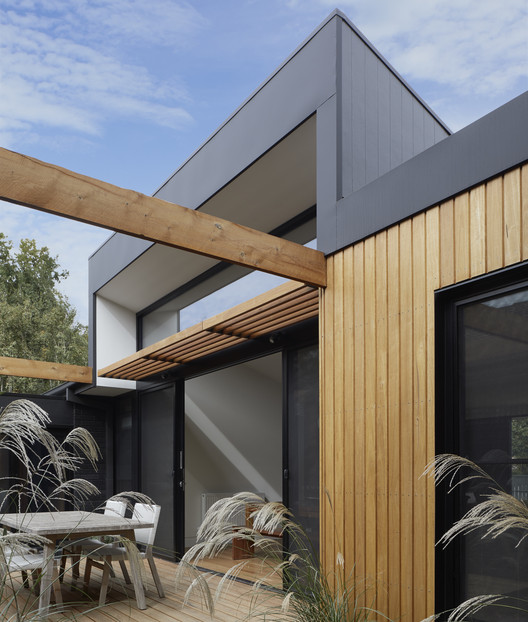 Text description provided by the architects. Hawthorn Villa is a villa unit in a group of four, reconfigured to accommodate the owners needs for additional functions within the home and improved connections to its outdoor areas. Generous planning setbacks provide the street-facing home with a surprising large front garden for a unit. It also enjoys a more typical smaller rear courtyard that faces north. The design aims to use the living areas as a funnel between both of these outdoor spaces creating a home experience amongst garden.

By making the existing plan more efficient, most new accommodations have been able to be placed within the existing footprint. The only extension to the footprint is the kitchen, which sits almost in a nook allowing the living zone the freedom to be articulated as a bridge between front and rear courtyard. A subtle lowering of the floor level across the living and wide glazing either side further reinforce the design aim. Internally, a flared ceiling line over the dining injects north sunlight deep into the home and creates a sense of scale that increases the perception of space available to the rear courtyard.

The unit had a garage that was accessible from the common driveway to the side of the house. This has been repurposed into a convenient bike store on the driveway side, with the majority of it returned back to the home as a cosy kid’s space accessible across the deck. Timber finishes are used extensively internally to define areas and in details, complementing the style of the existing brick veneer building. Colour is used to create transition to more private zones.

A value judgement was made at the project’s inception to decide whether the existing home was worth keeping. Consideration to other units in the development and visual consistency of the group, as well as the high embodied value and condition of the existing dwelling led to the decision to keep the home and rework it. Hawthorn Villa demonstrates that much can be improved to basic building stock, particularly when considering how the rest of the site can be unlocked. Close attention to the existing conditions, but not being constrained by it has allowed a new story to prevail.