Text description provided by the architects. The house is located on a plateau of a mountain almost three hours outside Mexico City and seeks for two seemingly contradictory things: shelter and openness. On one hand, it strives to be a refuge from the radical climate, which in the same day varies with almost 30 degrees centigrade and where it rains almost daily for 6 months, and, on the other hand, tries to open up as much as possible towards the vast landscape.

In order to meet both the need for shelter and the desire for openness, the house is arranged around four courtyards. The first, a curved courtyard, works as a transitional space between the exterior and the house; the second, larger and in the central position of the house, marks the transition from the most private to the most public areas. The third, at a lower level, is a veiled space that leads to the terraces on the roof and the fourth forms a kind of house in itself for the service areas.

These four courtyards allow generating different areas within an endless landscape and frame the views in a precise way. They also provide a greater dialectic between the interior and the exterior, for example, each space is turned towards a courtyard on one of its sides and a free exterior on another, which produces cross ventilation in each space, sun in two or three different orientations and generates one house on the inside and another on the outside.

The roofs of the rooms, the study and the living-dining room are concrete vaults that generate a new topography that coexists with the vegetal landscape of the flat roofs that correspond to the areas of lower hierarchy such as the kitchen, the bathrooms and the storage spaces. In this way, a game is established between the organic forms of the clay-covered vaults and the green roofs. 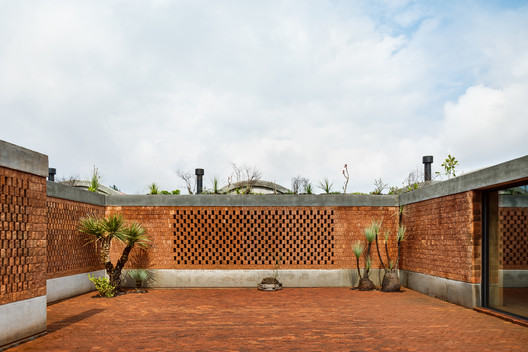