Save
The Royal Institute of Art / Norell/Rodhe 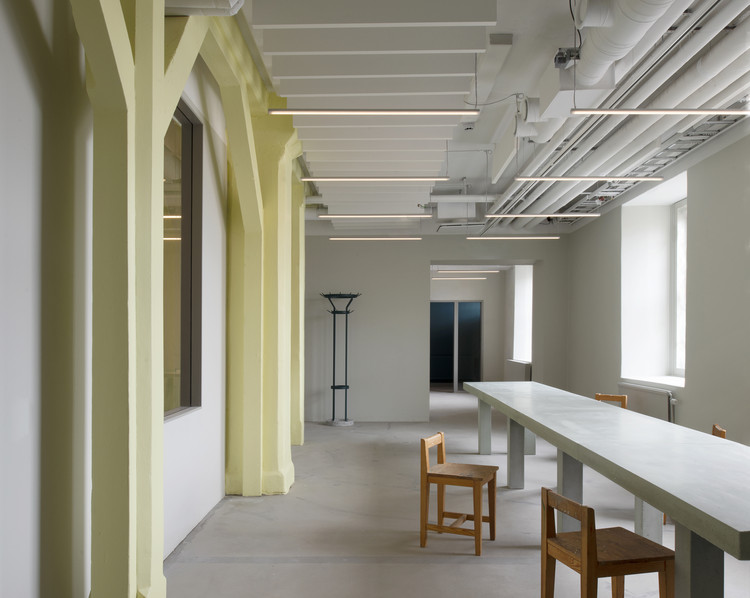 Text description provided by the architects. Architecture studio Norell/Rodhe has completed a new interior in an historical building for The Royal Institute of Art, a leading art school located on the island of Skeppsholmen in the heart of Stockholm, Sweden.

The Royal Institute of Art lost several ateliers and workshops in a devastating fire in 2016. In the aftermath of the fire, the institute decided to expand locally, utilising the existing building stock on the island. As a pilot project, Norell/Rodhe was asked to transform the interior of an old navy building into a new home for faculty and students working with photography, multimedia and moving images. The project explores a new pedagogical model, where hierarchies between professors, workshop staff and students are flattened by gathering them around a disciplinary subject rather than based on academic rank.

The building was erected as a small single storey building in 1732 and has since then gradually grown in all directions. It has undergone many shifts in function, from a mine factory for the navy, to different types of workshops and cultural activities. The design of the new interior sifts through these historical layers of the building, juxtaposing them against each other and against new additions. The programme is laid out in a sequence that spans from discursive spaces such as seminar rooms, to spaces for production, such as a film studio, video editing rooms, and a digital dark room.

The front part of the building facing the quay contains discursive spaces. This part is characterised by a long stretch of diagonally braced timber posts that were inserted when the building was extended vertically in the 1800s. Windows towards the quay are transferred onto the wall behind the posts in order to provide daylight for seminar rooms. The back part of the building faces a hill and is more industrial in character. It features skylights and an overhead crane and contains spaces for production. Several rooms can thanks to blinds, curtains and flexible furniture be used for film screenings.

Throughout the project, key existing elements such as the braced posts are articulated with colour and complimented with bespoke fittings and furniture with a monolithic materiality: A long table in cast concrete, shelving, cabinets and vitrines in pigmented particle board, and a kitchenette in stainless steel. Most rooms feature ceilings with exposed existing installations in white.

Chairs and stools for seminar rooms and social spaces were reused from the institute’s main building. The chair Lilla H (“Lowercase H”), and the Ateljépall (“Atelier stool”) were especially designed for the institute in the 1990s by renown Swedish furniture designer Åke Axelsson. 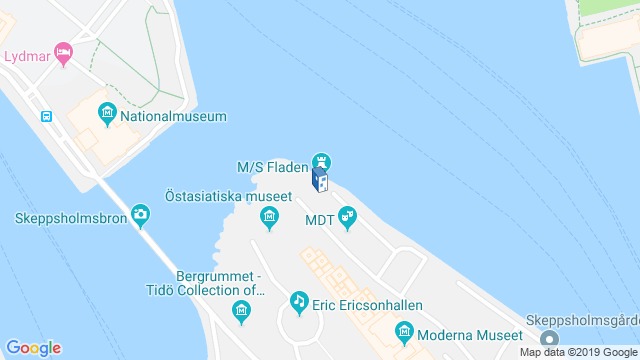 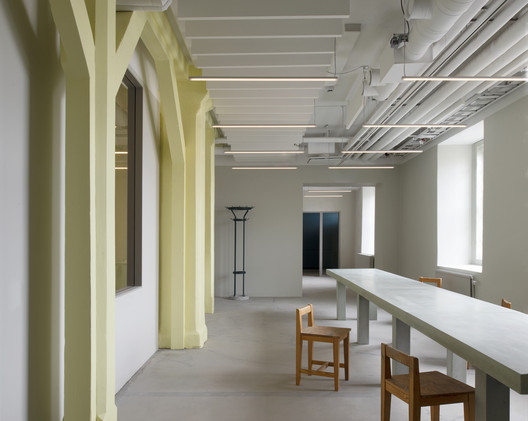