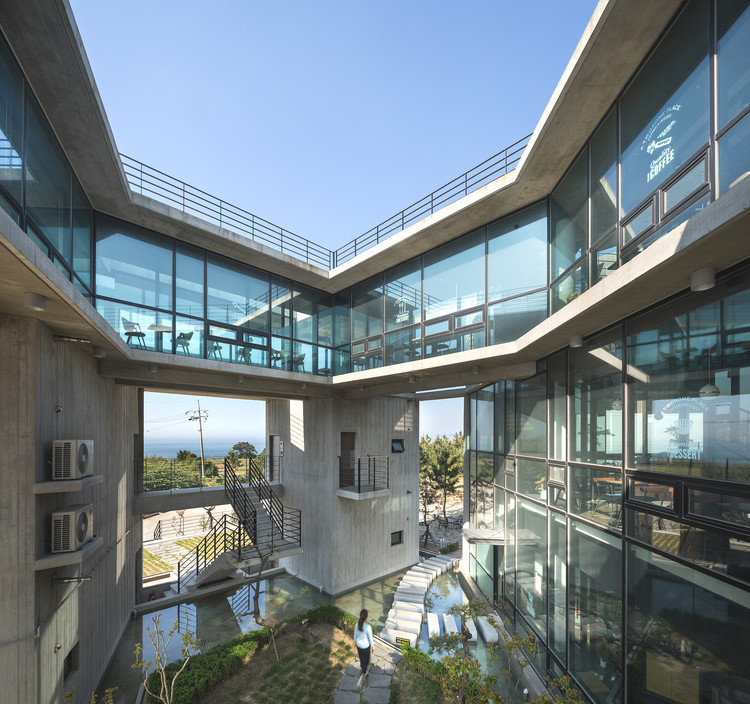 Text description provided by the architects. This site is located in Ganjeolgot, which is famous for the earliest sunrise in Korea, and surrounded by the lands reserved for the creation of a new neighborhood park so as not to be available for any further development. Amongst the neighboring areas, it is located at the highest hill, a remote spot farthest from the existing commercial facilities in Ganjeolgot, and in its vicinity a public parking lot is supposed to be built, which we thought need to be considered for our proposal.

For the program, the client required a commercial building (which was originally a personal cafe but changed during construction to a franchise store) run by himself as well as a guesthouse. We wanted not just to fulfill the client’s programmatic needs, but to recover the public sense of architecture by suggesting a commercial building for those who visit the neighborhood park and Ganjeolgot, as a culture complex mixed with the park.

Due to the low budget, we shunned a large-scale building but created void spaces in between buildings that can communicate with the outside and be recognized from anywhere without a particular direction. This process of design brought forth a layout resembling a pentagon, naturally. Also, the directionless quality will enable future visitors to approach this building from anywhere in the neighborhood park, communicating anytime with one another. We emptied out the center of the irregularly-shaped site and created a café space on the 3rd floor that circulates along the surrounding periphery, designing programmatic masses of guesthouses at the corners underneath as supporting piers.

The pentagonal central courtyard formed in this way is mediated with the in-between void spaces on the 1st (ground) and 2nd floors, interlinked again with the circulation outside, so as for the light penetrating the in-between spaces to reflect off the water inside and outside on the ground floor, thus creating a sense of profoundness and mystery. We wanted to make the users feel the changes of light and the sea in the various spaces inside and outside. That is to say, we wanted them not to be restrained within their circulation inside but to use various spaces inside and outside, where many visitors can plan and hold exhibitions, cultural events, and performances so as to utilize the café as a cultural space beyond any simple commercial space. Probably when the neighborhood is developed into a park before long, this building will have the stronger potential than it does now.

We intended to combine different functions into one and apply to the café the concept of circulation, which is what we hope will be used for the function of observatory when the Ulju-gun county incorporates this place into a park. Those who visit this place want to see the sea and the sunrise. Thus, we proposed a three-story―not a one-story―building and  convinced the client to locate the café on the 3rd floor (within the height limit of 11m). The client was much against the idea at first, in that it would decrease commercial accessibility. Nevertheless, we managed to persuade him after a long attempt. Accordingly, we were able to create radical outdoor spaces on the 1st and the 2nd floors, which served to make visual connections between the pentagonal courtyard and the space outside the building in various directions.

We hope this pentagon become the suggestion of a new possibility to show how powerful architecture can be when it settles down as a culture complex considering the public even though it is a commercial building which could be easily alienated from the quality of space. 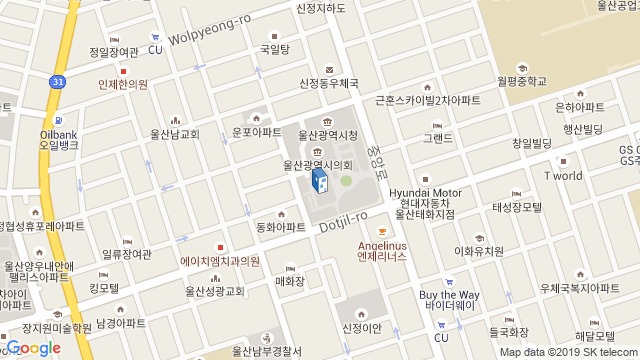 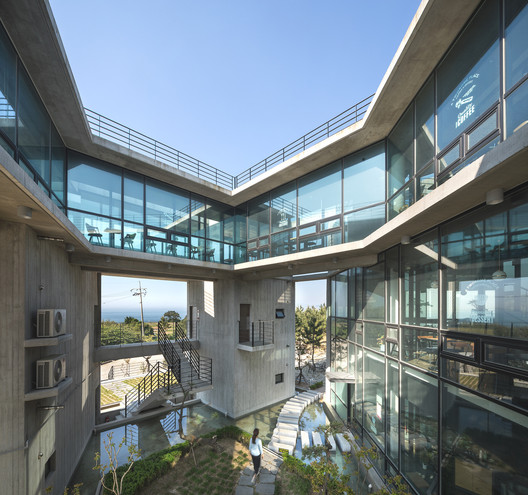