Text description provided by the architects. Guryongpo is a place, which has the legend of falling a dragon out of ten dragons arise from the sea to sky. Since it has rich fishery resources such as whales, crabs, and squids, it became a harbor to plunder under the Japanese colonial era. Japanese House street, where it was made at that time, still exists. One side of Guryongpo harbor is crowded with many small restaurant and pubs but on the other side, relax space such as Ara square is mixed.

The client had run a small restaurant in front of the breakwater since she married 30 years ago. Now, she wanted to make that spot into a small hotel, where is the place to watch the sea. Because of being possessed by that sea view, we stared design under the small budget. We imagined a hideaway place to do nothing but watch the sea view. Not so much design is needed the site, where adjoin the sea. We tried to make a place to feel the sea and listen to the sound of the wave without any artificial obstacles except a single glass.

Trapezoid shape site makes it possible to place a large unit on the southwest corner, and rounded corner windows which maximize the view are attached the triangle windows to make dynamic facade. The hotel consists of 13 units, which are nine standard rooms, two deluxe corner rooms, a suite room, and the corner suite room on the fourth floor. The bathtubs were placed at deluxe corner rooms and the corner suite room to relax in hot water while watching the sea view.

Since the major design point of the interior space is changing the view of the sea from the morning to the night, we tried to make a minimal and natural space without bold colors or designs. Combination of exposed concrete walls, Oak floorings, and white ceiling make a simple yet raw feeling. Minimum lightings and furniture are arranged. 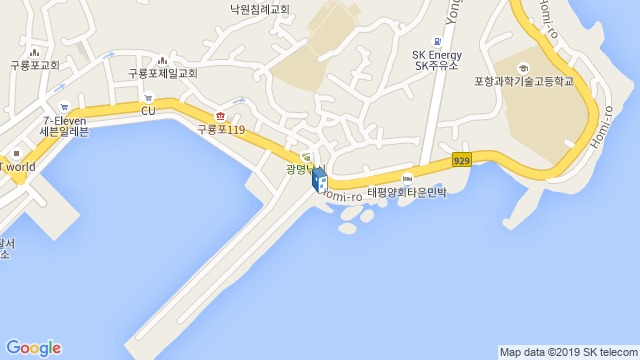 Location to be used only as a reference. It could indicate city/country but not exact address.
Share
Or
Copy
About this office
Snow AIDe
Office
•••