Text description provided by the architects. In 1833 the town of Northam was gazetted; with the Ballardong Noongar people suffering intense and bloody repression until 1841 when relations became generally peaceful. In 1905 The Aborigines Act allowed the State to have complete control of ‘protection, control and segregation of Aboriginal people’ and in 1933 the whole Aboriginal population of the town was exiled to the Moore River Native Settlement- some 200 km away and in another “country”.

The laws that enabled this were only repealed in 1954, and the Ballardong families returned to the town.  In 2016 the Shire Council obtained funding to create a new Cultural Centre that would promote and support the Ballardong Noongar people of the Avon Valley.

IPH and the interpretive designers Thylacine worked in parallel with the Aboriginal community of Northam to design a place to teach Aboriginal and non-Aboriginal people about Noongar culture and the environment. A project working group drawn from representatives of Elders and key families in the region who worked directly with the design teams to generate the brief for the building, decide how it would function and how Noongar Culture would be presented.

They were keen to have a building that appeared unlike any European building of the town- a place that responded to the landscape and revealed it through Ballardong eyes. The Centre appears as two intriguing curve-linear black forms, with a meandering slatted timber screen facing the river to the west.

These forms are perched on columns above the 1:100 year floodline and linked to the ground plane with a long ramp and staircase sheeted in translucent polyester cladding creating a wind-break and shading device.

The afternoon sun and heat load is managed by the long timber screen, formed from vertical planks of local recycled Jarrah timber, arranged to respond to the experience of looking at the river through the fine woodlands that line the banks of the river.

Windows and openings in the facility make reference to the idea of a “cultural compass” and gesture across the landscape to both visible hills and distant Cultural sites- allowing visitors to understand the Ballardong country beyond the immediate place. The river and the flood-drought cycle became a core reference for generating the building form.

From the street side the black forms silhouette above the wooded edge of the levy and from the far side of the river the centre appears like an ancient perched log.  At night the lighting reveals the meandering timber slats and back-lit polycarbonate sheeting shining between the woodland trees like a welcoming campfire. 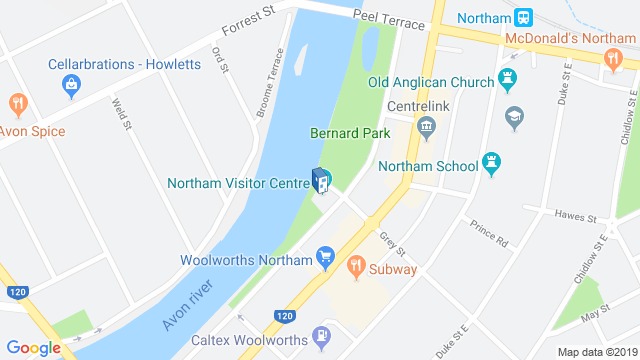