Text description provided by the architects. One-family houses, cottages as a style mean a serious challenge for the customer families and the authorized architects as well. The ground-plan layout and the functional connections should get special attention since they should reflect the habits of the family members as their living spaces. After them the other aspects like façade, design should be considered.

Our office obtained the design work of this villa building in the district II through a competition. It is a great pleasure for an architect if the customers trust him/her blindly. We could act with full power, the customer said only “fellows, I want to see again the same what I saw on the visual plans”.

We were afraid a bit of construction despite of the developed plans because there was a building contractor given who we had never worked together with before. But that enthusiasm and accuracy what we could find exceeded all of our expectations. We would never have dreamt that a four-storey residential building of monolith or reinforced concrete structure could be made ready together with its environment in 8 months.

On the narrow, in two directions heavily sloping plot which is longitudinal parallel to the road the building was located closed towards the road. Because it is a rather high building its mass was divided into parts horizontally shifted per storeys. The first floor (ground floor) ends in an individual wall from the road in the direction of the slope almost floating in the space further increasing the intimate feeling of the living storey. The white mass of the upstairs cube floats above the ground floor part of dark covering also closed to the road but totally opened towards the southern view. On the upmost storey a box withdrawn from all directions is placed having a black, large-panel coverage, where a lovely view of Buda opens up from.

You can feel a rational, economic approach on the whole building. The ground-space of more than 300 sqm is not prodigal at all. Its spaces are reasonable on scale, you can feel emptiness nowhere, but everything is influenced by a familiar atmosphere at the same time. The play of masses and façades with consoles, individual walls, with the “bridge” element having a floating loft can seem unusual but elegance can be felt on them. The clearness, the moderate character and furnishing of the interior spaces show the good taste of the interior designer. The ground-floor layout is clear. On the cellar-storey there is a spare bedroom in addition to the service rooms. On the first floor the living-room-dining room-kitchen and a children’s playing room are located, upstairs the children’s and parents’ bedrooms are. The uppermost storey having panorama is for resting and relaxation. This villa safely stands on its place in terms of variety and moderate character, but the same time it shows both an extent and well-founded richness. 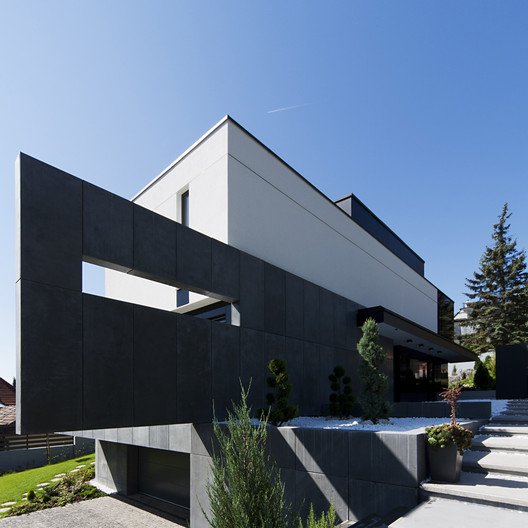