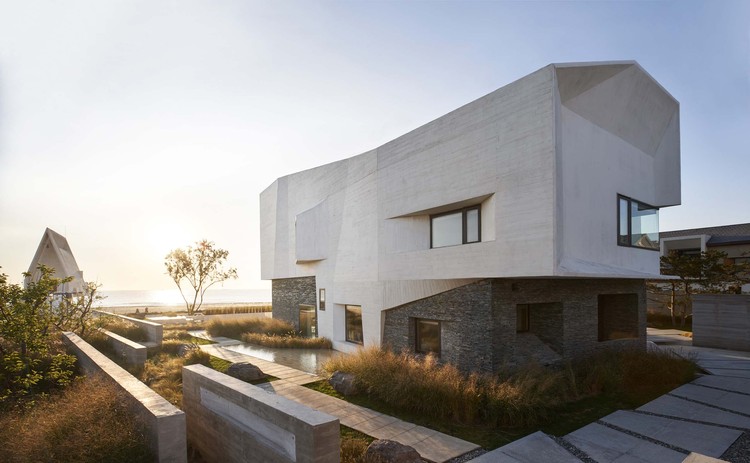 Text description provided by the architects. A new beach house has recently been completed in Aranya, Qinhuangdao, China. Qinhuangdao, with its geographic reason as having the nearest beach, is known as the most populous city for millions of people from Beijing and Tianjin to enjoy their summer holidays. Yet an-hour drive down south from the massive crowd, a small town - Aranya, for its serene beach environment and great community engagement, in the last 5 years has become the destination for the new middle-class, to pursue a "quality holiday resort" lifestyle，and ideal location for beach houses.

Located in a prime position within steps to the beach, this site not only takes in sweeping view of the sea without any obstruction, but also well enhanced by the pitched-roof“spiritual center”of the Aranya Chapel.

While we were asked by the client to redesign a new house to fit its wonderful setting, we thought the previous building that had a footprint running west-east towards the sea and stretching to the south has a potential to orient the house to maximize the sea view while blocking out the summer sun. Thereafter, we reclaimed and altered the existing on-site structure to add a shorter wing on the south side to allow an open-plan for more living spaces. In a sustainable way, we re-create a new spatial experience that flows "through" the building, which engages people with the surrounding of this prime site as one moves through the house, providing a sense of the entire natural/communal environment in incidental moments.

Our architectural intent was to create a series of dynamic spaces that could work for multiple gathering niches and more communal spaces for entertaining. As one wandering into the House T from the arrival entrance, diffuse light streams in from all sides through the building, as well as the airflow. The house has an abundance of strategically located large windows, providing abundant day light, minimizing the need for lighting. While the ground floor been fully open-planned throughout with semi-outdoor vestibule, kitchen, dining and library, the generous heights of the living room give a feeling of openness and airiness which embraces the views of sea and sky. These living spaces positioned at the ground level, facing a maintenance free exterior garden in a flexible state between private gathering and communal bypass, also engages in its best capacity to connect to the beach activities. On the contrary, deep window seats under the skylight in the library take advantage of the secret vista, creating the perfect place to relax with a book for some private time.

The concept of the house also makes it easy to navigate between the 2 levels. Following the stairs next to the library, one will arrive at the second floor with 4 bedrooms, each with distinguished features. Either spectacular view with the sea, or with a balcony from which you can see the sea, and also feel the breeze without the sunburn, or a frameless corner window open to the inner courtyard.

The House T’s north façade is reconfigured with two volumes interlocking together: a thickened white T-shape cast-in-concrete wall sitting on a dark layered schist rock plinth. This solid “T” armour of the north façade shelters the building from cold winter northern winds, while at the same time its undulating surfaces and punched in and out openings provide the audiences with a vivid expression, as most of the public coming towards the beach and the chapel will pass by this prime located property along the north side.

Majority of the building materials were locally sourced, particularly the rock strips for the ground floor extending from exterior into the interior. We also adapted many local craftsmanship from terrazzo flooring to pebble mosaic. The most advanced was the undulating wood grain molded cast-in-concrete on the façade.

Ultimately the House T is intended to provide a myriad of atmospheres defined by the spectrum of natural environment and communal life which characterizes the entire setting of the site. 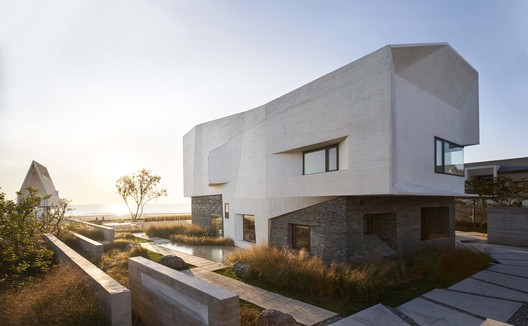