Text description provided by the architects. With a position of respect towards the nature (artificial or natural) of the site and with the aim of integrating the new use of study house, it is resolved to preserve the pre-existing ones: a mediagua that functioned as an office, the green area with a mandarin tree and two pedestrian accesses the first a gravel absorbent floor (informal) and the second a cement platform (formal) which worked as a main income to the office, executing an intervention that maintains the integrity of the artificial system.

The informality that informs the way of life.
From the constant review of the informal that takes advantage of the limits, a light structure is used that allows us to dodge and occupy the place around the tree that acts as a force of expansion, freeing a vacuum that traps everything that binds us to the earth and closing on the facade, disconnects the person from the immediate context.

The two pedestrian accesses are used for space mobility, the gravel road (informal) is assigned to the formal entrance of the house as it brings the user closer to a natural context by the sound it generates. The cement platform (the formal one) will articulate the dwelling with the workshop, which resulted from the analysis carried out when exploring the mobility data in the city, which indicates that, when locating ephemeral functions (informal business) in sidewalks that are used only when needed it allows a variation in its use (from being busy to being empty). Under this argument, the articulating element is hybridized with the kitchen and laundry generating step scenarios and informal coexistence.

The chosen technique allowed maintaining the integrity of the wetland, using prefabricated materials that minimize the impact on cost and time of intervention. The recycled materials of previous works were: iron for the whole structure, glass and fiber cement plates on the roof and façade.

The main beams of the workshop float on the green area avoiding humidity and allowing the flow of air, sustained in 6 points on a concrete foundation isolated. The 4 x 4 cm irons are used to shape the kitchen doors and windows, as well as the structure of the façade that supports the fiber cement plates on the outside and the shelves inside, creating a "furniture wall" that floats like a concrete curtain crossing diffuse images with the exterior.

Wavy Eternit plates painted in a similar shade were installed throughout the roof (kitchen and workshop). On the floor of the workshop, lacquered MDF wood panels were placed, and in the kitchen a refurbishment of resin-protected concrete was carried out to generate a "division" of the exterior floor, preventing the ingress of water. For the wall behind the kitchen counter, auto paint was applied with a compressor, obtaining a total impermeability of the existing irregular surface. The furniture presents a variety of records in its melamine since it comes from remaining previous constructions.

In the interior façade of the existing construction (mediagua), recycled pine wood is used as a finish and in the new part (kitchen and workshop) is placed glass plates, new and used from a previous project respectively. The inner wall is painted light blue to emulate the eternal and eliminate radiation by reflection.

As it is popularly said, it is occupied "up to the water of the vases", having a very clean and friendly construction with the ground, where its inner courtyard turns into a small orchard, making interior and exterior entangle without adornments in a light shelter that if desired could disappear and transported as an informal space leaving that nature in its pure state.

When we sit and contemplate this landscape from one of the armchairs inside the galleries, we will witness a revealing spectacle: that of the eternal succession of the same, to the cycle of the day that of the night happens to him; the rain and the sun, the flowering of the tree and then the falling of the leaves and so on. We generate an artificial representation of the world, a scenario of exchange between heaven and earth that appear as a metaphor for cyclical time with the man and all this in the center of the city. The work of art that life means. 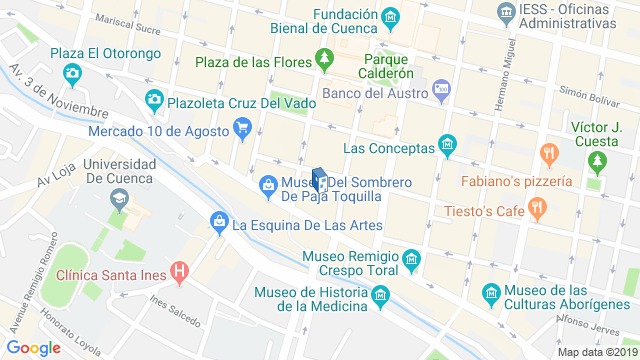 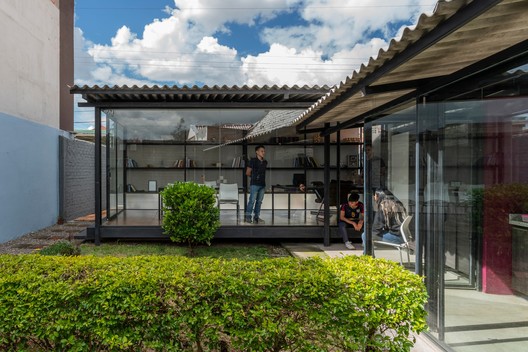