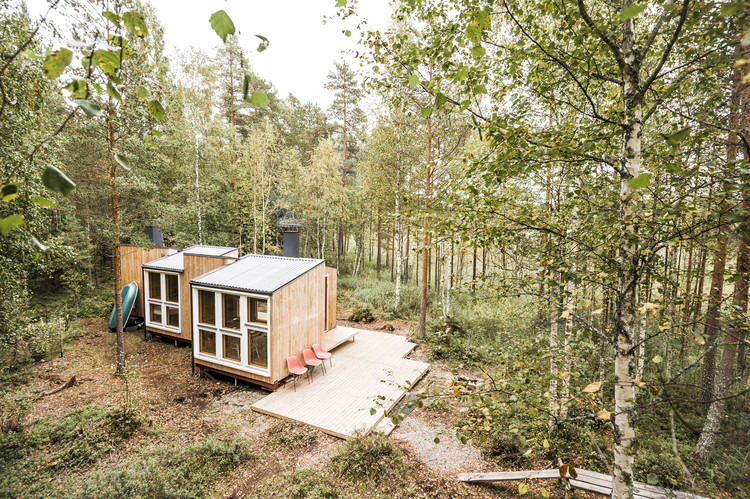 Text description provided by the architects. In the unlikely event of being a passer-by in the remote landscapes of Scandinavia, the cabin – small but fine, situated in a forest next to a lake, provides and inviting yet unexpected sight. Such a sight is only bestowed upon those lucky enough to find it, though, since Berlin design duo studio politaire (Jonas Becker / Timm Bergmann) placed it amidst dense vegetation. “It was important for us not to dominate nature”.

To stick to their tight budget of about $14,000 and get as much experience as possible, the students planned and built almost everything themselves. “Sitting on the roof yourself, pulling a stovepipe through the ceiling and then sealing the roof — that’s something else. We wanted to experience these processes instead of just planning them in theory,” Bergmann says. Their design is complex but has a simple, minimalist effect. “The house is staggered so that you get a different view from each window,” Becker says. The four slightly offset rooms are spread over 26,8 sqm and surrounded by an impressive natural landscape. The rooms are arranged for ease of use. The kitchen, left, leads to a small living room, which leads to the bedroom and the sauna. The rooms are identical but rotated in relation to one another.

“As we built everything ourselves, we not only cut costs, but we were also able to make changes along the way. As a result, we extended the terrace, built the roof ourselves after all — contrary to the initial plan — and made the stovepipes ourselves,” Bergmann says.

The two set up a base camp in the house where Bergmann’s grandparents once lived. Since it has electricity and water, it provided them with the infrastructure to prefabricate as many parts of their house as possible without being dependent on the weather.

“The house has a modular frame. In total, we installed 17 squared lumber frames. Plywood boards add rigidity, and they are connected to each other with other wood,” Bergmann says.

Out of many reasons we tried to work as much with wood and wood-based materials as possible. It is sustainable, locally produced, cheap, easy to work with, long-lasting, climate-neutral, forgiving, reusable and produces a pleasant living-comfort.

“We wanted to show that a house does not have to be big,” Bergmann says. “Building something beautiful does not have to be expensive,” Becker adds. They want to communicate their values with their design and show that it is possible to build a house even without extensive practical experience.