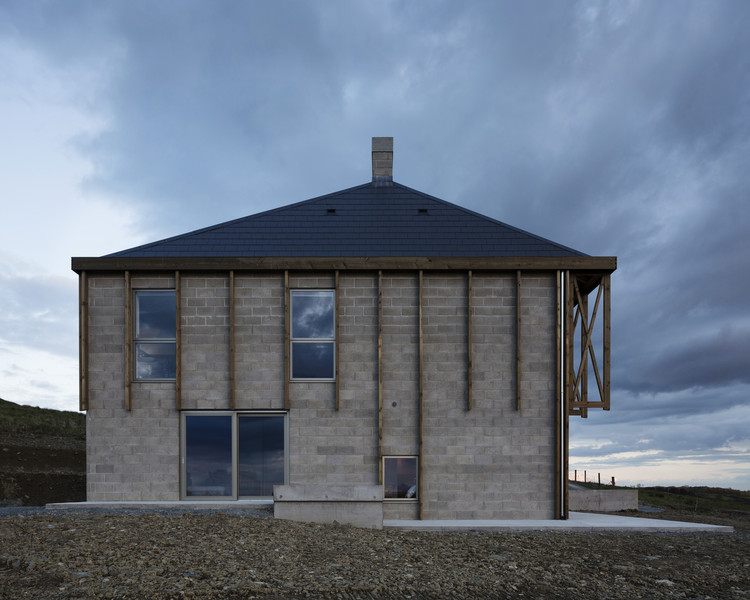 Text description provided by the architects. The Irish countryside is divided into parcels of land called townlands. This  house is situated in the townland of Killan and is built on a hill on the client’s farm. The house is square in plan, the footprint being approximately 12m x 12m. It takes references from the Casino at Marino, the 18th century Neo-classical house by Architect  William Chambers. Though much smaller ‘The Casino’ (small house) is a derivation of Palladio’s Villa Rotunda.  both being  square Greek cross plans, and both offering four equivalent elevations to the surrounding open landscape.

The house at Killan departs from the rigorous order and symmetry of its neo-classical precedents. It was the basement plan of the later villa that I became preoccupied by, where the walls are pushed and pulled to facilitate the domestic programme of the downstairs servant staff, while still bearing the dominant order down from above. The house at Killan is similarly organised for domestic habitual life.

The project is largely unembellished, this is as much to do with a strict budget as any aesthetic economy. The outward form of the building, though square in plan, offers four differing figurative elevations. The eccentric location of the chimney ensures that the pyramidal roof alters the character of each elevation. A massive  douglas fir timber box gutter is propped along its length by vertical fins at regular centres. At the north-east corner these timbers form a portico.  To the south elevation, the eaves is extended out by 1.1m from the wall, to shade the south elevation and shelter the main patio.

Major visual axis through the building are maintained, but here and there the walls are pulled or pushed off axis to form the necessary rooms or to create  a recess or alcove for a door or bench. The ground floor rooms are relatively open to each other, arranged around a central double height hall. A 450mm step in section across the main east west axis separates the upper from lower quarters. Large oak doors  close off  the rooms if desired.

The kitchen space is opened up to the south view by long panoramic opening spanned by a  9.5 x 1.5m concrete beam. Pre-cast concrete floor panels bearing on the walls or cast beams  carry the upper floors. The walls are plastered in an off-white coloured sand cement floated finish and are left unpainted. Oak joinery and flooring bring some warmth to the masonry.

Robust concrete benches and walls are set out around the house to enclose the stepped or ramped areas of the paths.The chimney is a narrow horizontal slot alluding to a pillbox bunker overlooking the terrain. It is the ‘strong centre’ of the house. The landscaping and construction of outbuildings will continue in the coming years as budget allows. The house is deliberately unharmonious, if the house appears half-finished, it is so that it remains open to multiple interpretations. 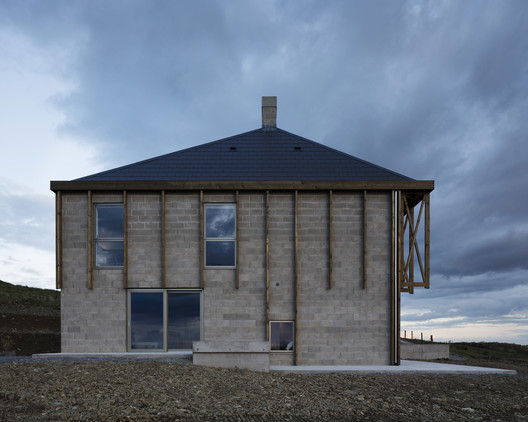