Architecture practice DNKag has designed two corten discs as a rooftop extension to a seaside production facility in Saint Petersburg, Russia. Dubbed Harbor Sea Infinity, the project will become a social and business center overlooking Sevkabel Port. In a short time, Sevkabel Port has become a new point of attraction for urban activities and a popular destination for citizens and tourists in the city. The new rooftop addition aims to bring new life to the industrial warehouse.

Sevkabel Port is a new St. Petersburg public space located in Vasilyevsky Island Harbour by the Gulf of Finland near the historical Siemens & Halske cable factory. “Harbour Sea Infinity” is the slogan of the project concept. It considers the location and history of the place. Cable and reels are both historical and event markers. Thus, the team proposed a superstructure consisting of two “reels” – offices with a 360-degree panorama. It is a symbol of infinite possibilities that complement the atmosphere of discoveries and anticipations in Sevkabel Port.

Most of the roof space will remain open to retain the potential for further development. The project provides for clear zoning of the roof for the public, and this public space includes several zones with different types of activity. A wide promenade with panoramic views stretches along the perimeter of the roof. Multi-level mini-zones for recreation and games are placed along the promenade. In the western part there is a café and a terrace with views of the bay. At the same time, the pavilion is an amphitheater offering views to the central events zone and the city skyline. Mobile benches with plants make it possible to change the common space depending on the scenario.

In the central zone of the roof, under the disk that is raised to the second level, there is a protected public space for exhibitions and recreation. It ends with an amphitheater staircase leading to the first level of the superstructure. The superstructure roof provides for one more point of attraction – a round view platform. Employees of the office area can use the roof space as a park, in addition, they have their own private courtyard, sheltered from the elements.

The office part is a superstructure consisting of two “reels” – offices with a 360-degree panorama. It does not affect the existing facade of the building, since the lower disk of the offices is elevated above the roof of the old building. This solution creates an unobstructed view from the offices, while underneath, the mechanical and storage areas can be placed. The offices offer picturesque views of the water, city and courtyard. The optimal width of the building ensures good natural lighting and allows flexible space planning. Overhanging slabs form a circular balcony also serve as protection from direct sunlight.

The competition was organized by Project Baltia on behalf of Sevkabel Port Managing Company. 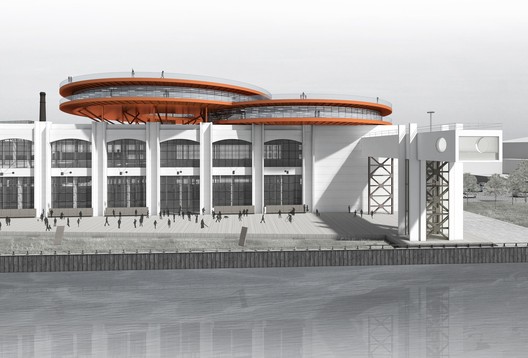