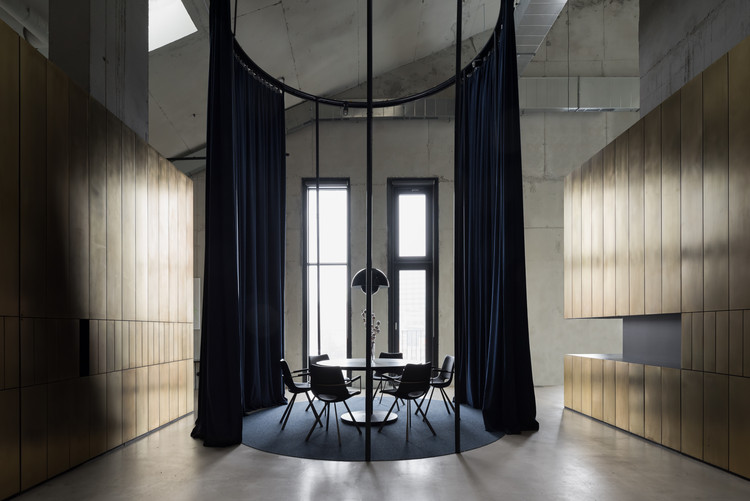 Text description provided by the architects. The 180 square meter sales office of the NV / 9  ARTKVARTAL  residential complex is situated in a penthouse of an apartment building in the Serebryanicheskaya Embankment, is one of the brightest examples of Moscow's modern architecture. Our task was to create an unusual, spectacular and representative office space, taking into account the initial unique character of the site – a large light concrete space with panoramic windows, overlooking the Yauza river. A special detail is the non-standard 8,5-meter high gable ceiling.

The main design solution separates the space into three areas according to the purpose: a living-room with a scale-model, a rotunda-shaped meeting room, and an office for the employees. The zones are separated by two brass-panelled boxes – a kind of ''space anchors'', around which the life in the office circulates. Technical and utility rooms such as kitchen, sanitary facilities, and office storage are located there. The central element is a scale-model of the residential complex, illuminated by a one-of-a-kind lamp, designed by the architects. It consists of 25 bulbs around the perimeter, contrasting with the general lighting concept.

The conceptual take on the interior design here is the work with various scales: the 5-meter high meeting room rotunda is located in an 8,5-meter high space. The rotunda is surrounded by heavy blue velvet curtains, guaranteeing the privacy of conversations.  The 3,5-meter high brass technical boxes with a large pattern of brass panels emphasize the scale variations. Elements of interior decor: minimalist furniture, fine details, carpets and high theatre drapes on the walls serve as accents in different zones of the space. All the objects, manufactured especially for this project, are based on our designs: the lamp above the scale model, multileg tables, table for the scale model. They accentuate the individual character of the space and manifest the purpose of the office. 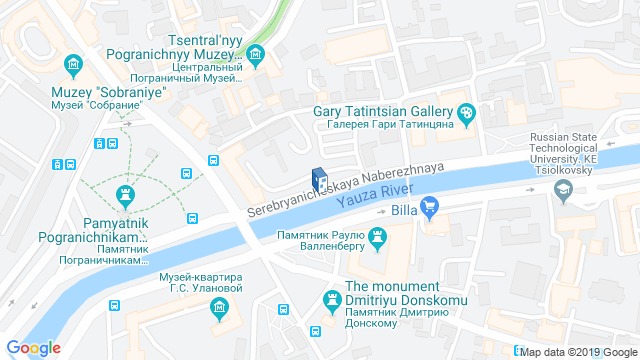