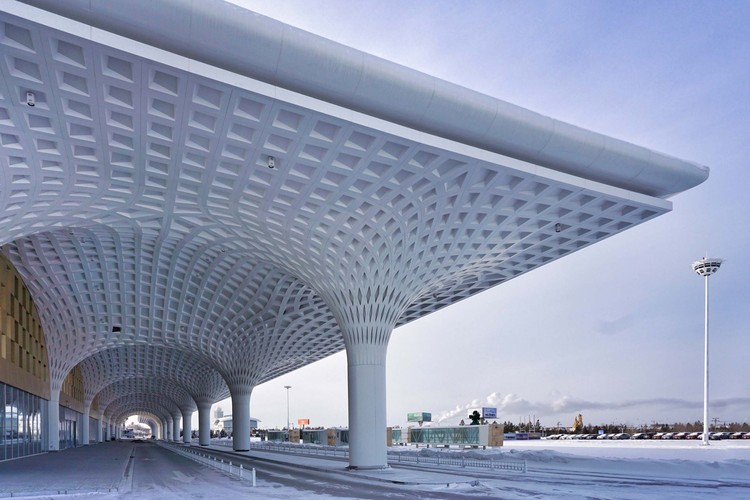 Text description provided by the architects. Hulunbuir Hailar Airport is located in Hailar District, Hulunbuir, Inner Mongolia. Hulunbuir is well known as one of the Top 10 Snowy Cities in China with its most beautiful prairies in the world. The built-up area of existed T1 Terminal was 7,600 m2. It could not meet the need of ever-growing passenger volume for prairie tourism. Obviously, it is necessary for the existed terminal to be expanded.

At the beginning, the boundary and plan of this expansion project were fixed. As a result, we were facing a great challenge – how to design a modern architectural work with rich local features by the fixed conditions.

Concept Generation
An innovative architectural form was produced - frame columns support the huge roof on the second floor by several double-V-shaped diagonal structures. The boundary between vertical and horizontal interfaces is eliminated by the structural integration of columns, ceiling and roof, to create a continuous Mongolian-yurt-like space. This golden and white huge space also makes people feel like they were in the sunny birch forest.

An under-eave space with double-height is created in the landside system by the altitude difference designed between the south and north facades. Clouds and herds, the typical local elements, are beautifully expressed by the elegantly curved roof with bi-directional single-layer reticulated shells. A broad undulating and rhythmic view is shown to the passengers in everywhere of this layering T2 Terminal space.

The stretching canopy is an important element connecting the new and old terminals. A unified architectural language is produced by this perfect connection. Also, the space connectivity is achieved between the front driveways and rear waiting spaces in the two buildings, creating a pleasant under-eave space.

Element Design
The main architectural structure, roof and interior of the planned vertical 7-span terminal building are integrated into two basic spans to decrease the difficulty of construction. Taking the size of roofing grid structure as the basic modulus, aluminum plate is analyzed and classified by its curvature and camber: the plate with less curvature is used as the flat, the plate with more curvature as the single-curved, and some with typical curvature as the double-curved, to minimize the construction difficulty and cost.

Construction Control
Shaped keel curtain wall, TPO roof, and nodes of flowering column made by double-curved aluminum plate are innovatively deepened in the post-deepening design and construction process. And the 1:1 model was set to do some adjustment, so as to ensure the actual construction effect.

Hulunbuir Hailar Airport serves as the first landmark for visitors to Hulunbuir. Hence, the T2 Terminal is designed with strong local features and all the basic architectural elements an international advanced airport needs. It is a key project to promote the development of prairie tourism. It is a brilliant pearl on the prairie. 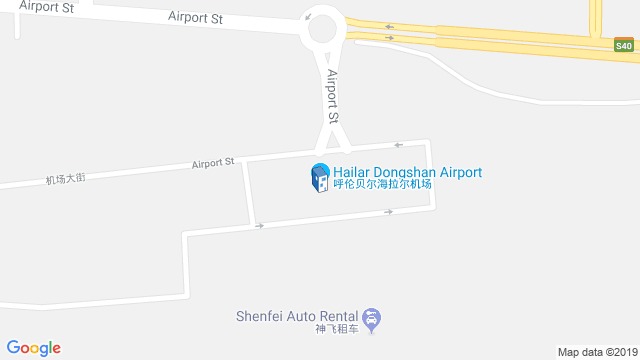 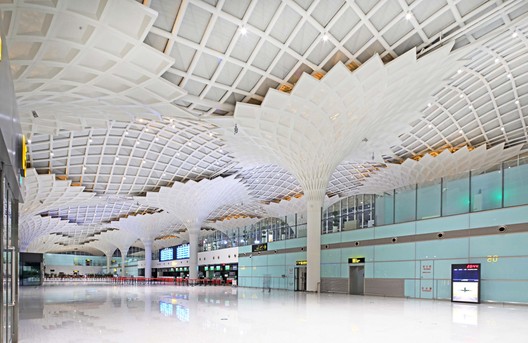 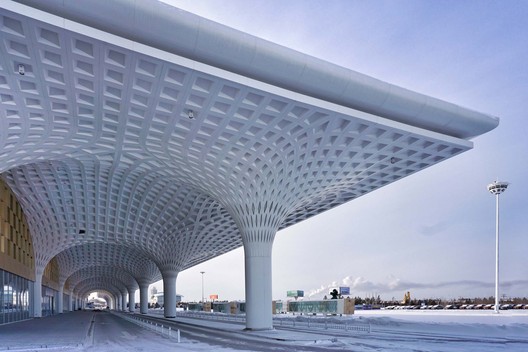