Save
"If You Can’t Do Beautiful Things You Are Doomed": in Conversation with Zhang Li of Atelier TeamMinus
Share
Or
Copy 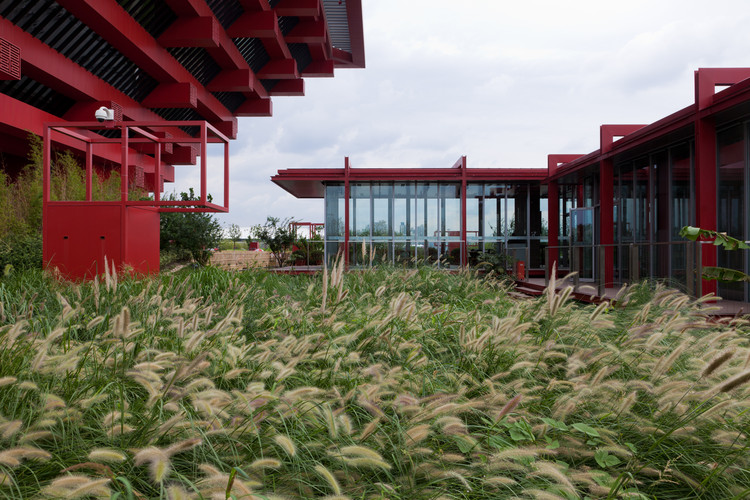 I live in a bubble. I hop from conversation to conversation with architects who live in their own bubbles. I bounce from one bubble to the next. These bubbles are formed by the gross misalignments and discrepancies between what these architects say and what they do. I like venturing into their fascinating minds; they form the mythology of architecture that I love to inhabit. In the following interview Beijing-based architect, educator, and critic Zhang Li helped me to diagnose these discrepancies. He said, “No matter how moral, how ethical, how correct you are if you can’t do beautiful things you are doomed… Architecture is great because it is beautiful.”

Zhang Li graduated from Tsinghua University in Beijing and taught at prestigious European and American universities. He has been a Professor of Architecture and Chair of the Architecture Department in the School of Architecture, Tsinghua University, China’s most prestigious university. His 50-person practice Atelier TeamMinus was founded in 2001. Since 2012, the architect has been serving as the Editor-in-Chief of the leading Chinese monthly magazine World Architecture. The following is an excerpt from our recent conversation at his Beijing studio.

Vladimir Belogolovsky: As a critic, how do you asses the current creative climate in China and opportunities here for Chinese architects to innovate?

ZL: Opportunities are growing but we need to participate more openly in a critical debate. Chinese culture, of course, is dominated by Confucianism, which is not necessarily conducive to debate.

VB: I agree. There is so much of the good work, but the debate seems to be absent. Can there be any architecture without a debate?

ZL: I believe debates make architecture. The current debate in Chinese architecture is, let’s say, – shallow. There are people who are willing to debate. While there are architects who believe their practices are driven by discussions. But in reality, on a bigger scale, the real debate is not there yet.

VB: And the global turn toward pragmatics, away from developing individual positions and personal identities is not helpful. Let me ask you very directly. Would you be able to name, let’s say, a leading figure in architecture here in China? By name, one person? And would you say your opinion is shared by others?

ZL: Yes, a very straight forward question. Very hard. You have to understand that the greatest majority of Chinese architects were trained for very specific tasks. There are very few architects who were trained outside of this system. So, one breed is these newly defined independent architects who are leading non-state owned or state-funded ateliers. Yung Ho Chang was the starter of this breed of architects. He is the big-brother-like figure to these independently-minded architects. His work is not easy to categorize. Most importantly, his way of practice is academic and experimental.

And the opposite of this breed is a big stream of thousands of architects who are working at the enormous system of state-owned design institutes. They are the ones that are truly shaping the Chinese cities. They are actually working better and better. Though the design institute system is not necessarily fostering debates and criticism in itself. Out of this breed, the big-brother-like figure would have to be Cui Kai, the chief architect of China Architecture Design and Research Group here in Beijing.

VB: And you are so carefully avoiding naming one figure that we can’t imagine contemporary Chinese architecture without and that is Wang Shu.

ZL: Probably because he is one of a kind and does not constitute a prime example to most architects, despite his high-profile status.

VB: Out of all the architects you interviewed was there one conversation that you remember as the most rewarding?

ZL: I interviewed Yung Ho Chang and Cui Kai, and the Tsinghua dean, Zhuang Weimin, all of whom are dominant figures. But to answer your question, I would like to mention one specific name: Li Xiaodong. He is somewhat unique in China. There is an ancient Chinese proverb that says, “One needs to step outside of a mountain in order to see it.” I think he is the only architect in China who somehow can distance himself from architecture’s immediacy. He is both serious and not very serious. He is like a guru to many young architects here and he is equally dedicated to teaching and practicing. He is not just about practicing but living and teaching and critiquing architecture and its identity. His practice is very small, and all of his projects are very special.

VB: Let me ask you something. I have visited a number of projects here in China. They are generally praised by international critics and portrayed by the architects themselves as pragmatic and about addressing real issues. They insist that their work is based primarily on the context, site, budget, program, etc. They are not at all about making beautiful objects. But…

VB: Well, I am sure you know where I am getting at. When you visit these places and talk to people who operate them, the first thing they tell you is that nothing works; this is too small, that’s too awkward, and so on. And then they say, “But, this project is so beautiful!” What do you think about this discrepancy and why are they fooling us?

ZL: Very interesting observation. Architects want to see themselves more liberal than conservative, and, if possible, on the intellectual side. And, of course, we want to see ourselves as very ethical. So, there is always an abuse of the ethical line. We deliberately try to mix the line of ethics with the line of aesthetics. But great architecture is always about this line of aesthetics. No matter how moral, how ethical, how correct you are, if you can’t do beautiful things you are doomed. Don’t you ever forget that architecture is about beauty. We have a visiting professor at Tsinghua, Terrence Curry who proposed to have a seminar on beauty. He was opposed by most of our faculty. Another member of the faculty asked, “What age are you living in if you propose to talk about beauty?”

VB: Sure, beauty is very subjective and hard to talk about. But if you say that you want your architecture to do good for society, there is this immediate connection and support. The problem is that they don’t do what they say. And then there is this emphasis on doing social projects. Is there an architecture that’s not social? How is an expensive hotel for tourists more social than an opera house or an exclusive teahouse more social than an art museum?

ZL: I would say that one of the most blatant lies that has been told by architects today is that architecture is not only beautiful, but it is also right. It is a lie because architecture is great because it is beautiful.

VB: Based on my observations, since the early 2000s, Chinese architects succeeded in forming, if I can call it, a collective identity in architecture that can’t be confused with others. Architecture being built here is distinctly Chinese. And despite many leading international architects building in China today, I would argue that the best work here is now being produced by the Chinese. Yet, if we look at this production it is somewhat formulaic. So many architects seem to ask very similar questions. I want to talk about the lack of variety and not enough risk-taking.

ZL: You are correct. The term collective is worrying. You and I were raised in our respective collective societies. And it is hard to distance ourselves from that thinking so quickly. We need some time before we can go deeper and become more diversified.

VB: Let me paint to you a portrait of a typical successful, independent Chinese architect today. His practice (there are very few female-owned firms) has a catchy name in English, which never includes his own name. His work is small in scale and the types are limited to buildings that tend to entertain the tourists. There is ambiguity between old and new. He favors traditional materials, humble building techniques, and he prefers to build in the countryside. He was educated abroad, primarily in prestigious American universities. And as an extension to that, he comes from families that are independently wealthy to the point that he can afford to sponsor or co-own his initial projects. Is this an accurate picture? Don’t you think it is a very particular path for such a diverse country as China? Or is it really that diverse?

ZL: Well, I would agree with you for the most part. I wouldn’t agree only with the part about wealthy families because before the late 1970s China was a very poor country. But you are right, some architects come from families that have become quite wealthy very quickly. But the rest is very precise. I think you already answered your own question. I agree with the picture you painted is not very diverse. We can do better. We need to expect something better, more diverse and closer to real life than these poetic portraitures of tourism-friendly, image-oriented, consumerist architecture. I am glad that you are not satisfied with the constantly updated stream of seductive images. But that’s why I mentioned the work of Li Xiaodong. His work is beyond the surface, beyond the first impression. He simultaneously cares and he doesn’t care about his details. His architecture is not calculated. If you go see his works, of which there are very few, you will discover things that seem to be left there as an error or unfinished. His work is not about perfection. Yet, there is this platonic order, symmetry, hierarchy. But nothing is forced.

VB: When I look at even some of the best projects by the Chinese architects, I see that they are concerned with historical continuity, questions of identity, materiality. What do you think are the most critical issues that Chinese architects face today?

ZL: I will paint this picture with a very broad brush. All issues related to anthropology here in China – space, meanings, people – are very important. Chinese architects have gone through so many influences in the 20th century. These were trends that people very closely followed collectively – from Modernism to Art Deco, Soviet-style architecture, to American Postmodernism, and now to rural, regionalist works. But you are right, the architects’ thinking is still very collective. And many of these rural projects are quite oppressive, even if beautiful. Oppressive because of their prescriptive tone. They force a certain behavior or attitude. We are in short of openness, curiosity. So many architects have become satisfied with their image-making. But this satisfaction is fake. We need to keep asking many questions, constantly.

VB: Wouldn’t you say that architects can only be diverse if they become themselves? If everyone starts searching for their own individuality, ideas will no longer be collective. They may be shared, but not copied uncritically.

ZL: That’s the way to remain authentic and truthful. Each project is different and specific for a certain group of people for a specific place and a specific program.

VB: What single-term words would you use to describe your architecture?

ZL: Situation, anthropological, non-calculated. I don’t mean careless, but not very careful, not too precise. I care not to be very careful.