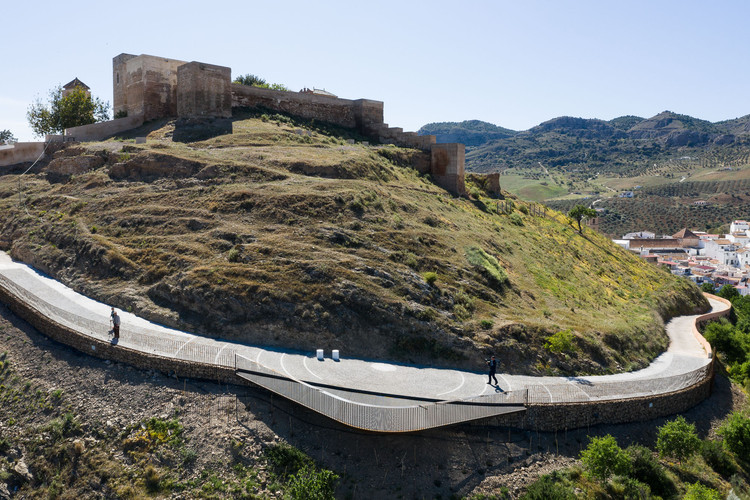 Álora, with its Castle surrounded by an ancient Arrabal, is placed as a bow of the mountainous landscape of Sierra del Hacho. The village has a rich and interesting history related to the Moorish defence against Catholics and about the creation of the malagueña, a kind of flamenco song.

It took place an architectural competition for refurbishing and renovating the castle surroundings in order to renovate public facilities as well as attract new travellers. We purposed an intervention called “tapestry scale 1:1” which captures the energy of its cultural landscape. It would be a kind of stone map which would help the visitant to see, discover, know and experience the cultural landscape. The second phase of the complete intervention has been a part of the path toward the Castle and the so called viewpoint 360º

The path toward the castle which surrounds the Cerro de las Torres (Towers’ hill) joins the Castle with the Plaza de la despedía (main square of the Arrabal). In its main curve, where the 8th via crucis stop is, appears the viewpoint showing Alora’s landscape plenitude.

The path was in a bad conservancy condition and the wall facing to the views painted in brown salmon colour. We have built the pavement as a stone carpet and the wall has been conceived looking for its “invisibility”. The lower part of the wall has been made in brown sandstone gabions with the colour of the hill. The upper part, the veranda is nearly an air vibration.

The stone path modifies its texture as it approaches to the 8th via crucis stop, two nearby marble seats and the viewpoint which suggests a dynamic 360º view. On one side, there is the natural landscape of valleys and the basin of the Guadalhorce with its orchards. On the other, thanks to our aerial position, we could link the main highlights of the cultural landscape: the Gothic chapel of Jesús Nazareno de las Torres, the Arab castle, and the medieval geometry of the village with the mount Hacho on its high.

The materials are used following their own truth. Their way of joining follow our main project ideas.

The edge of the path is made by gabions filled by sandstone from the surroundings. The metallic bars show their oxidation colour as well as stones do. The upper part of the balustrade, empty, makes a nearly invisible limit which alouds looking through the far landscape.

The vibrating floor is defined thanks to the different sizes, texture and darkness of the paving stones of granite. The central “carpet” is done by mid size squared, rough and dark stones. It is flanked by small and flat paving stones. The carpet leads to a dark pavement area geometrized in circle waves whose epicentre is a circled piece of marble which points out the 8th stop of the via crucis. Close to it, two cylindrical seats show their impact on pavement, simbolizing the biblical scene where two women from Jerusalem comforted Jesus on its way to the Calvary.

It is flanked by small and flat paving stones. The carpet leads to a dark pavement area geometrized in circle waves whose epicentre is a circled piece of marble which points out the 8th stop of the via crucis. Close to it, two cylindrical seats show their impact on pavement, simbolizing the biblical scene where two women from Jerusalem comforted Jesus on its way to the Calvary.

It is a stop on the way, a place for contemplation and an information point of the cultural landscape.

Its floor is made of metallic plates creating a vibrating transparency. The balustrade is made by thin vertical bars supporting a width handrail which contains perforated an aerial texts. Perforated ones indicate historical periods, important persons or interesting data for the traveller, and the aerial ones point out special places of the landscape.

We have recovered some abandoned areas of the slope. Our work has focused on the lower part of the slope where there have been planted low maintenance bush masses; lavender, lavandula, and caper, capparis spinosa.

At sunset, the way to the castle is marked by a rhythm of small lighting square pavement, placed between the stone ones. During Easter acts, there will be candles inside the balustrade.

We would have liked having captured the essence of landscape and having shown to the traveller a new way of feeling the historical landscape of Álora. The path and the viewpointunderline the landscape making its values emerge. 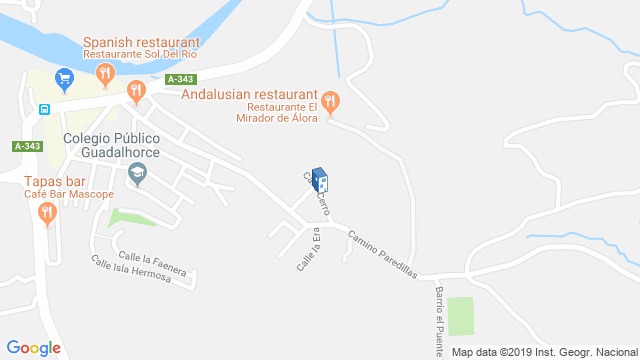 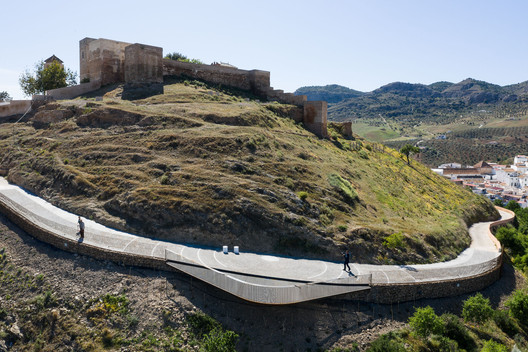