Australian architectural firm BVN has created a new proposal for a hotel in Sydney with a green waterfall roof. The 17-story structure is designed with a wedge-shaped roof that will feature a cascading green landscape. The hotel will have over 300 rooms, a restaurant and bar. The hotel is designed to offer views over Belmore Park through the city and towards Central station.

Located on a vacant corner site opposite Belmore Park and the Capital Theatre, the hotel completes the street wall to Belmore Park while sympathetically reflecting the varied built form heights of the surrounding buildings and the sun access plane to the Park. The built form envelope was developed through a collaborative approach negotiated with the City of Sydney. The city council granted a stage one development application for a mixed-use building at the site. A significant landscape strategy by firm 360 Degrees is proposed to be integrated into the southern facade of the building to become a visual extension to Belmore Park.

The masonry podium relates in materiality and scale to the heritage façade of the Manning building on the opposite side of Pitt Street. Atop the podium is the elevated reception, flowing into a bar & lounge on the same level featuring covered outdoor terraces on the north and south created by the articulation of the built form. The project also proposes retail offerings along the Pitt and Hay street frontages and a supermarket below ground.

Sydney's new hotel is scheduled for completion by 2020. 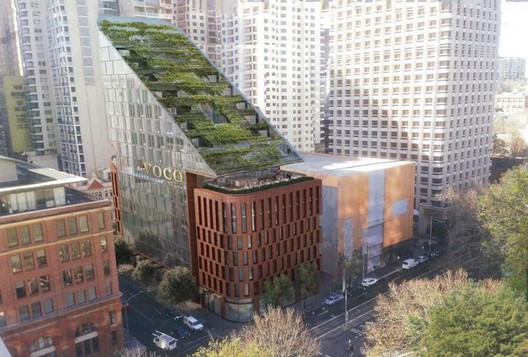