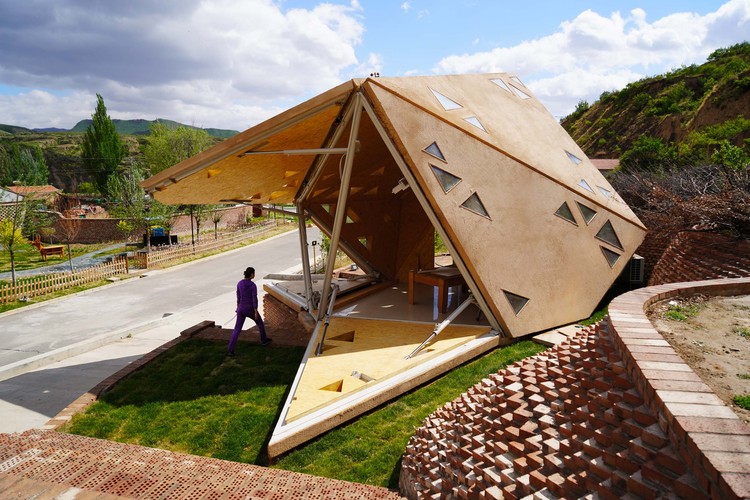 Text description provided by the architects. A team led by Professor Weiguo XU of Tsinghua University, integrating digital architectural research, built a 30-square-metre tourist reception center in the village entrance of Wujiazhuang (Xiahuayuan, Dingfangshui County, Zhangjiakou). The village is featured with shallow mountain hills and gentle loess slopes. It is said that there is treasure hidden in the mountains gully. This place is actively preparing for the huge tourist population of 2022 Winter Olympics.

Being a reception center and souvenir sales room, the hut could function as a performing stage during festivals or large-scale events. It interactively opens or closes according to the weather condition.

The project design adopts the single-cell morphology of the quasi-crystal structure as its form, with irregular 16 panels, three of which are operable using mechanical devices. When the environment temperature is between 16 and 29-Celsius degrees, the three panels will open to different directions, to ensure good ventilation and outdoor sceneries. When the temperature drops under 16-Celsius degrees, they will automatic close and trigger the coil-tube ground heating system to warm the space. They will also close when above 29-Celsius degrees, with the air conditioning system being started. Some other special conditions like storm or snow will also elicit a reaction so as to protect the hut from damages.

All these reactions are realized by the interaction system inside the hut, which includes three parts. The first is the sensing system for collecting environmental information, such as temperature sensor, humidity sensor, wind sensor, etc. The second is the software central control system, which is responsible for calculating the collected information according to the set requirements and issuing instructions. The third is a mechanical device mounted on a three-piece panel that, when the system receives instructions from the hub, performs commands to push the panel motion to the right position.

The hut is located on a slope, as a continuation of its background. The irregular 16-sided crystal form echoes the mountain shape and the platform terrain. Furthermore, the building panels are made of GRC materials, to reproduce the local traditional grass rammed earth wall, soluble in the natural environment of the loess hillside. It is meant to arouse the sense of identity among villagers.

The design of the building adopts the three-dimensional digital modeling method. The structure, panels, windows and indoor elements are all based on the digital model. The structure adopts the irregular steel frame system. The entire steel frame is welded on site with fourteen 13cm-diameter steel pipes. Steel pipes are processed in the factory using NC machining, while the Digital Total station is used for field positioning and welding.  GRC panels are prefabbed by BAOGUI stone companies, assembled on site and made seam treatment to form a closed entity. The windows on the panel are based on drawings from digital models, which are installed on site after processing by the manufacturer.

The interior of the hut is finished with Eucson plate veneer. The interior space follows the irregular introverted-inclining folding form, with the highest point of 5.5 meters. Its scale is similar to the traditional ancestral temple, creating a more futuristic spiritual space for villagers.

The outdoor ground and retention slope use the most common red bricks in the village, forming freely and lively according to the mountain escalate. The northeast slope creates a natural auditorium. When the three panels are fully opened, the hub will become a performing stage, with spectators sitting freely on the surrounding sloping steps to watch the show.

The interactive hut is an experimental example of the new building system, hoping to attract more attention to the field of study. 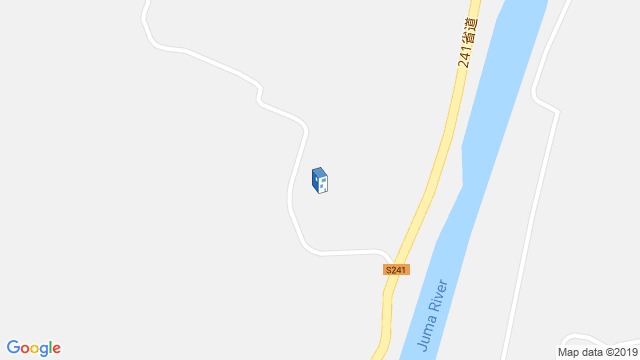 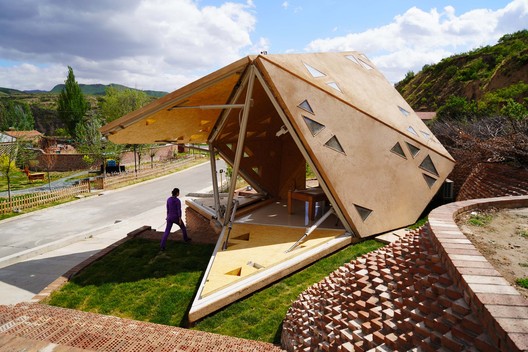